OVER TROUBLED WATERS Mary Janigan May 16 2005

THERE HAS ALWAYS been something quaintly reassuring about the Boundary Waters Treaty of 1909. That stolid Republican, William Taft, was president when Canada and the U.S. inked their remarkable pact. Sir Wilfrid Laurier was prime minister—although Britain signed on behalf of its bustling dominion. The two neighbours vowed to preserve the quality and quantity of their shared water, creating an International Joint Commission to arbitrate disputes. Through peace and war and the Depression, it has worked: 51 of the 53 joint references were resolved by mutual agreement.

And then along came North Dakota and its rash decision to lower Devils Lake. That closed, befouled so-called “sub-basin” about 100 km from the Manitoba border has been flooding its banks since a cycle of rainy weather began in 1993: the volume of water, tainted with agricultural chemical run-off, has quadrupled. Up to now, it’s been a North Dakota problem. In the late 1990s, the U.S. Army Corps of Engineers launched a lengthy study of diversion proposals. Daunted by the complexity and cost of the corps’ approach, North Dakota adopted its own unilateral, far cheaper project to dig an outlet canal to the Sheyenne River, a tributary of the Red River that meanders north into Canada and Lake Winnipeg. The state proceeded without its own environmental study—and ignored many of the corps’ planned safeguards, including a pricey sand filter. Pumping starts in mid-June.

North Dakota’s neighbours, on both sides of the border, are horrified. In Jan-

Eight Great Lakes states and Missouri have joined Manitoba in opposing the plan, which threatens to pollute U.S. and Canadian rivers

uary 2004, citing the treaty, Canada asked the U.S. for a joint reference to the IJC. The eight Great Lakes states plus Missouri fervently agreed, warning of pollution and invasive species. Manitoba has even joined two local environmental groups before the North Dakota Supreme Court, challenging the water discharge permit. “This province historically has tried to avoid escalating disputes,” says University of Manitoba political scientist Paul Thomas. “Our actions now are a sign of cumulative frustration.”

So far, U.S. Secretary of State Condoleeza Rice has not replied to Canada’s request. Ottawa believes this would be the first refusal to make a reference in the treaty’s history. North Dakota argues that it offered to send the scheme to the IJC in 2002. But that was the army corps’ plan—and its environmental assessment wasn’t complete. So Canada said the reference was premature.

Now, Ottawa is scrambling to stop this potential catastrophe. (There are even two distinct fish parasites in that ancient pothole.) Ambassador Frank McKenna and Treasury Board President Reg Alcock have asked for a one-year delay for IJC scrutiny. The IJC’s Canadian chairman, Herb Gray, told Maclean’s that the commission would meet any time limit in a referral. And Ottawa is mulling last-minute, high-level legal action in Washington, such as a request for an injunction based on treaty violations.

But there are larger issues in this sadness: half of our 300 transboundary rivers flow south. And Montana is now objecting to B.C. plans to mine coal under a vital riverbed. “If a state can violate the treaty, then a province can and all of a sudden you have kneecapped the treaty,” Alcock told Maclean’s. “We cannot allow this to happen.” North Dakota must not drown that 1909 hallmark of civility in a chemical swamp. [i'll 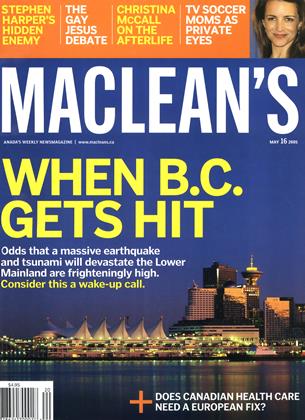