ADVICE TO INVESTORS: BE COOL DONALD COXE May 2 2005

IT TOOK A WHILE. For months, Wall Street had been reassuring investors that stock prices would keep rising, while its clients were worrying about those two big costs that were obviously risingenergy and short-term interest rates. Nasdaq, the playpen of incurable optimists, peaked hours before its Times Square headquarters became the epicentre of New Year’s Eve merriment. The two major U.S. indices, the S&P 500 and the Dow Industrials, kept climbing until March. The bloodletting got under way in the week before U.S. tax time (April 15).

As we are daily told by big-name gloaters, America’s global influence is in serious, if not terminal, decline. Wall Street’s overdue reappraisal affected stocks around the world. That Canadian oil stocks were among the hardest hit may suggest to the casual observer that the sell-off was irrational: why should the most obvious beneficiaries of expensive oil, the producers, get socked along with the most obvious losers, such as General Motors? What happened in just days to such earlier glittering energy companies (April 7 to April 15) as EnCana (from $90 to $80) and Canadian Natural Resources (from $71 to $63), demonstrates an iron law of finance: when the brothel is raided, the guy in the waiting room who protests he was there to peruse the magazines also gets nabbed.

Should Canadians who have prospered from the three-year performance of the industrial world’s strongest stock market dump their stocks now because the world’s biggest stock market gets scared by $50 oil and 2.75 per cent fed funds rates?

A few reasons to stay cool. First, the Fed won’t keep raising rates if it sees the U.S. economy is stalling out. Second, oil prices

are high because global demand is higher than Wall Street’s “experts” thought, while global capacity to produce and refine oil are lower than those so-called experts thought. Oil production is in permanent decline from most of the major oil reservoirs of the world, including the two biggest—Saudi Arabia’s Ghawar and Mexico’s Cantarell. There are major reserves that could be brought on stream from some OPEC members, such as the Gulf states and Venezuela, but they

RECENT softness in the Canadian dollar is caused, in part, by bad publicity abroad about the Gomery inquiry

are heavy, high-sulphur crudes, and the world has insufficient refinery capacity to process such low-grade material. There hasn’t been a new refinery built in the U.S. since 1976, and more than half the refineries operating back then have been shut down for lots of reasons including the high cost of complying with new environmental standards. When the world adjusts to high-priced energy, it will get back to work.

The third reason for investors to stay calm is that the recent softness in the Canadian dollar, which has caused foreigners to scale back their purchases of Canadian equities, is caused, in part, by the publicity abroad on the political fallout from the Gomery inquiry. Canadian investors must make their own appraisals of the risks from that political mess. They may well conclude that no matter who is in charge in Ottawa, oil in the ground in Alberta is worth far more than a year ago, and decide to take advantage of this bad publicity to add to their positions in the leading companies, most notably the oil sands producers. That makes sense to me. There will be no return to the National Energy Policy. (Proof of progress: the man who drafted that disaster now runs the TD Bank.)

Finally, the Toronto stock market bears only superficial resemblance to New York’s. On the S&P, oils and mines account for roughly 10 per cent of the weighting, but that share rises to 25 per cent on the S&P/TSX. That means that New York has just a one-to-nine winners’ ratio (benefiting from the impact of high commodity prices), while Toronto has a favourable one-to-three.

So a Canadian investor carrying even more exposure to the oils and mines than the Toronto stock market index can feel somewhat smug about Wall Street’s concerns. It is hard to make a case that New York will have a good year, because the S&P, Nasdaq and the Dow are heavily weighted in stocks that either don’t benefit from expensive energy and metals, or are downright hurt by them. The U.S. stock market is notable for companies that rely on ingenuity, technology, marketing and competitiveness to earn profits. Canada’s stock market is notable for companies that rely on resources that have been under the ground for hundreds of millions of years.

What’s best about Canada from an investment standpoint happened eons before the first hominid appeared, and that doesn’t get much publicity in the media. What’s worst about Canada happened since the Second World War, and that gets lots of publicity in the media. The best is real and can be relied on. The worst is debatable, and may not be as bad as it sometimes seems.

Owners of the great resource stocks can certainly lose in the short term, but they know that, because the price of their products is determined in the global marketplace, no foreign competitors are going to be able to squeeze their profit margins—or drive them out of business. That serenity does not apply to holders of shares of companies in many of America’s biggest industries, such as computers, pharmaceutical companies and the auto manufacturers.

The U.S. and European industries most at risk from Chinese and Indian competition have far more market capitalization than all the oil and mining stocks in the world. That’s why major stock markets were struggling in the months before they suddenly slumped.

As a holder of resource stocks, you should not really care who wins that competition: you know that the winners will be buying resources, driving up commodity prices and enriching you, even if they never buy anything produced by any company you own. In that sense, commodity stocks are far less risky than the Street would have you believe: your only risks are that your companies will not replace their mineral production, or that global economic growth will not be strong enough to keep resource prices high. Globalism is your friend, not your foe.

Wall Street strategists haven’t loved resource stocks for more than a decade. Naturally, they now argue that resource stocks, which have done splendidly despite their scorn, must be very speculative, so they deserve to get hammered. That means you must understand your own capability to assume stock market risk. If you cannot, in emotional and/or financial terms, withstand the kind of stock market slump experienced in mid-April, you should take

THE BEST is real

and can be relied on.

The worst is debatable and may not be as bad as it sometimes seems.

some profits and move to the sidelines. However, unless the global economy falls into recession, those resource stocks will come roaring back.

Wall Street’s major problem is that many of the biggest companies in the heaviestweighted sectors of its indices are selling at excessively high price-earnings ratios, given the growing problems in their economic and competitive environment. That valuation problem can be resolved if the Fed stops tightening, or oil prices plunge—or if the prices of those stocks retreat to attractive levels. The latter is the likeliest outcome. That means there could be more collateral pain ahead for Canadian investors, even though they own stocks that should, in reality, not be affected.

Markets are the measurements of the interaction of human reasoning and human emotions. That’s why they can delight you, surprise you, or terrify you. Expect all three, and you won’t be in shock. U] 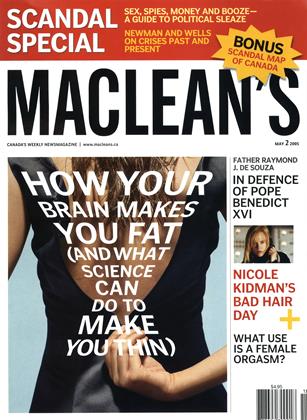