MOST LOVE TRIANGLES in Hollywood conform to the cartoonish contours of an Archie comic: sweet, blond Betty is always a little too nice to command a guy’s undivided attention when Veronica, the sexy, backstabbing brunette, is in the vicinity. Think Debbie Reynolds, Elizabeth Taylor and Eddie Fisher. Or Laura Dern, Angelina Jolie and Billy Bob Thornton. So when Brad Pitt and Jennifer Aniston announced their separation in January amid rumours of a Pitt-Jolie romance on the set of Mr. and Mrs. Smith, which opens on June 10, it appeared to be a clear case of the Archie Rules. Aniston is the perfect Betty, the sort who inspires haircuts and other women’s trust. Jolie collects knives and was recently named the sexiest woman in the world by Australian men’s magazine FHM—totally Veronica. It all seems clear now but, initially at least, the media got the story wrong.

When we first learned of the Brad-Jen split, the problem wasn’t Veronica, it was Betty, whose priorities were completely screwed up. Brad wanted to have a family. Jennifer preferred to focus on her (gasp!) career. “He was much more interested in having a child,” an unnamed source (Brad’s publicist, perhaps?) told People. “I think it was Jen that broke it off.” Pitt’s bona fides as a daddyin-waiting had been well-established for, oh, a whole month. In December, he’d tearfully announced to Diane Sawyer, “God, I’m going to say it: kids, family... Yeah. I have got family on the mind.”

Even the tabloid rumblings about an affair with Jolie were portrayed by the media as symptomatic of his ticking biological clock. It wasn’t that he wanted to have sex, per se.

Jolie’s main attraction, apparently, was that she was the mother of a child adopted from a Cambodian orphanage, a fact always invoked as though it were proof of altruism. Pitt reportedly bonded with the boy during filming; perhaps this was the family he’d had on his mind.

None of it made Aniston look very good. It seemed worse, somehow, to be a woman who didn’t want kids than a woman who fooled around with a married man—or a man who cheated on his wife. And Aniston did nothing to court public sympathy. Where were the tears, empty cartons of Häagen-Dazs and other feminine accoutrements of a breakup? (When Pitt split with then-fiancée Gwyneth Paltrow, she took to appearing in public clutching Winona Ryder’s arm, as if so weakened by her ordeal that she could no longer totter down the road unassisted.) Given that Jolie, a goodwill ambassador for the UN, was making speeches about the plight of refugees while Pitt, displaying heretofore well-concealed humanitarianism,

signed on to support a dizzying array of causes, Aniston’s tight-lipped composure and insistence on showing up for work seemed proof less of dignity than coldblooded careerism.

Then, in April, the shot seen round the world: Pitt and Jolie allowed themselves to be “caught” by the paparazzi, building sand castles with her three-year-old on an African beach. The photos were, despite the rumoured $500,000 price, innocuous. The stars didn’t touch, much less look at each other. They only had eyes for the kid. And for the spindoctoring. Reinventing Ms. Jolie as Mother of the Year was a bold stroke, to say the least. This is a woman who once explained a scar by saying, “You’re young, you’re drunk, you’re in bed, you have knives; shit happens.” And portraying Pitt as beguiled by her child rather than her more obvious charms deflects any image-damaging concerns that he is—how to phrase this?—a two-timing slut.

Just one problem with the packaging: why was a child used as a prop to support the morality of an adult relationship? In this case, the blame appears to lie with Jolie herself, judging from the latest Vanity Fair, in which she parades her son through a photo layout and provides a detailed inventory of her sex life—her preference for sleeping with curvy women, her no-strings trysts with male lovers—that will likely result in a slew of cancelled play dates. As Jennifer Aniston seems to know, not every woman is cut out to be a mother. That may be why this year’s Betty prefers hard work—and why, instead of fighting for Jughead, she let Veronica have him. PI 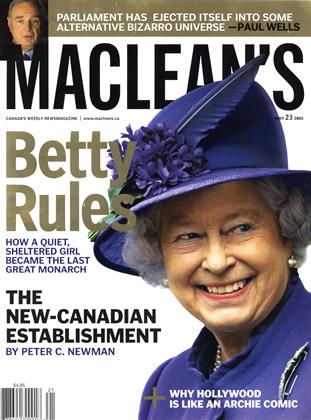