THE SEPARATIST BOGEYMAN PAUL WELLS May 30 2005

WHEN PAUL MARTIN visited Chuck Cadman last week to nail down the independent MP’s support in the big confidence vote, the centrepiece of the Prime Minister’s argument was that Canada’s national unity would be in peril if the Conservatives and Bloc Québécois defeated the government.

Stephen Harper, for his part, has repeatedly argued that re-electing a corrupt Liberal government would rekindle separatism in Quebec—and in Alberta. Bob Mills, the Conservative MP for Red Deer, said his constituents are talking about taking Alberta out of

Canada if Canada won’t take the Liberals out of power.

It’s getting hard to tell who’s really in bed with the separatists, or since apparently everyone is, who gets to be on top. If you can manage to believe both parties, then voting for either one will push the country to the brink.

Apparently the best reason for avoiding an election—not just this spring, but ever—is that Canada can no longer survive one. You’d think our national leaders would be a bit embarrassed by this state of affairs.

I don’t want to make too much fun of these competing claims of national toxicity. They’re widely and sincerely held, not only by the Liberal and Conservative leadership but by many of their sympathizers. It would really be swell, though, if Martin and Harper would lay off and tell their parties to do the same. It’s appalling behaviour to brand your opponent a threat to the nation. But since this country has seen more than its share of appalling behaviour from its MPs lately, that probably isn’t reason enough. The better reason is that talk of separatist threats can so easily turn into self-fulfilling prophecy.

You’d think Martin, in particular, would have figured that out by now. He was part of the Meech gang in 1990 who moved so lightly from supporting the Meech Lake accord as a useful improvement to a decent Constitution to arguing, for weeks on end and in full roar, that Meech’s failure would put the separatists in the catbird seat. When Jean Chrétien, vilified as a Meech detractor,

Just brilliant. Meech failed—sometimes stomping your feet doesn’t actually get you what you want—and it was suddenly very hard to defend Canada after making Meech the condition of its survival. Similarly, it’s irresponsible to say Harper is a national unity threat when Harper might yet become prime minister.

The other day I interviewed Stéphane Dion, who used to work pretty hard in the national unity salt mines. He said something I wish every MP would think about: “If, hypothetically, the Liberals are no longer in power, the country will be governed on the right. It’s not a good choice, I think. But having said that, my loyalty to Canada will be intact and I will work for Canadian unity with that government—even if, at the level of political philosophy, I would prefer to fight it. It seems to me that this

distinction should be made by everyone.”

We should be so lucky. Nor is Martin alone in his history of flirtation with the idea that defeat for his side means doom for a nation. When Stockwell Day’s Canadian Alliance lost the 2000 election, Harper blamed Canada, or those bits of Canada that had the poor taste to be located outside Alberta. He vented his disgust with “the very electorate” the Reform movement “had twisted itself into a pretzel to please.” He said Alberta had “hit a wall” in Canada and needed to build “a stronger and much more autonomous Alberta. It is time to look at Quebec and to learn.”

Harper did reject Quebec-style separatism, but only provisionally: “Separation will become a real issue the day the federal government decides to make it one.” These days he’s been singing the same tune. “If anybody in the rest of the country sends a signal that they are prepared to tolerate corruption, they are, quite frankly, imperilling the future of the country,” he said the other day in Calgary.

The survival of Martin’s government gives both leaders time to think about what they’re doing. They could start by giving this country some credit. It’s stronger than it looks. The Bloc might make gains in Quebec? It did before, in 1993 and 2004. Canada survived. The government might have few representatives in Quebec? Albertans have lived with that fate for a decade. Don’t assume Quebecers would have thinner skins. In 1997, a lot of my colleagues were sure Quebec would leave if Reform replaced the Bloc as the official Opposition. Now the very idea seems absurd.

Canadians traditionally don’t take election returns as a cue to give up on Canada. I wonder why our politicians wish we would. If our leaders could show some faith in the country, the country might regain its faith in its leaders. U] 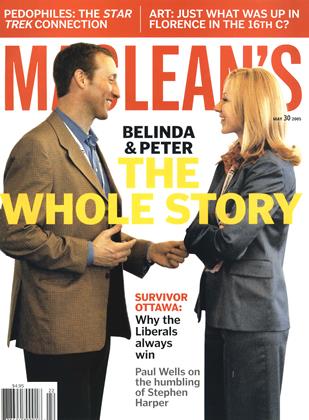