AT FIRST GLANCE, Tim looks like a pretty greedy guy. He’s at the Brant House, a Toronto club, with two girls on his arm, and yet he’s scoping the room for more. “See that brunette over there?” he says to the brunette by his side. “She’s cute.” Not only do his companions, Ariana Dalie and Thuy (“Tweety”) Nguyen, agree, but Dalie walks up to the girl who’s caught Tim’s eye and says, “I like your necklace.” They chat for a few minutes, then Dalie reports back, “Yup, she’s nice and approachable.” Seems Tim has got himself some supportive girlfriends—or he’s paying them.

Actually, Dalie and Nguyen do charge. For a total of $275, they’ll hang out with a guy at the public location of his choice for three hours, pretending to be his friends while trying to make him look desirable. And they chat up attractive girls, eventually drawing them into conversation with their client. The Los Angeles originators of this new—and somewhat disturbing—singles trend labelled the service Wing Girls, but since Dalie’s Toronto dating company is called Wink Singles, the Toronto contingent refer to themselves as Wink Girls. “I first saw this on GS/,” says Tim, 26. “This guy was at a bar with two wing girls. I thought it looked like a good idea. Of course, the guy on the show ended up dead. I hope it goes better tonight.”

Well, it does and it doesn’t.

The cute if shortish Tim admits to being one of those dreaded nice guys who has trouble starting conversations with women. “Once the ball is rolling, I’m fine.” In this chichi crowd, Dalie and Nguyen suggest that the former cruise ship activities coordinator and high school teacher play up the fact he now owns his own office-supply company. But are women more impressed by a man’s ability to sell paper than his love of kids and travel? Considering Tim’s reluctance to make any moves, we may never know.

About 15 minutes after first contact, the brunette and her friends have inched closer to Tim, Dalie and Nguyen. Tim’s been introduced, but as the girls gab, he hangs back. Then the dance floor fills up, the music gets

louder and the two groups drift apart. Dalie and Tim agree he’s missed his opportunity— but it’s hard to imagine what this shy guy could have added to a discussion about hairstyles and accessories.

A couple more drinks in, Tim spots another “target”—a blond, at the club for her friend’s bachelorette party. When Dalie notices the woman is being aggressively hit on by another guy, she makes her move, quietly saying to her, ‘Looks like you need some help.’ “She hugged me and said, ‘Thank you so much, I do,’ ” Dalie recalls later. “Then I said, T don’t usually do this, but I’m with a friend and he thinks you’re cute.’ ” She asked Dalie to point him out. “That’s when I noticed she was wearing an engagement ring,” says Dalie.

Strike two, but Tim looks like he’s having fun. “They’re shameless,” he says of his wingers, impressed by their ability to infiltrate a group of strangers. Just then, two women who’ve been roaming the floor push into the circle where Tim, Dalie and Nguyen are dancing. Wearing low-slung pants and a cropped shirt to show off her lower-back tattoo, one begins gyrating in Tim’s direction. Dalie says this happens a lot. “She saw

we were with Tim and really wanted to dance with him; it was her way of saying, ‘Look, he’s going to dance with me and not you, even though he’s here with you.’ But they don’t know that it works to our benefit.”

While Tim enjoys the show and plays along for a while, this isn’t the type of female he’s looking for. “Those girls were a little obnoxious,” he says later. “I don’t want that.” At 12:30 a.m.—with only half an hour left before the Wing Girls are off-duty and Tim

the stud turns back into a wallflower—things get desperate. The crew searches all areas of the bar and the outside patio for any remaining hotties. But no one turns up. “Every club is hit or miss,” Tim says a few days later. “I didn’t necessarily pick up somebody, but the girls did their job.”

Dalie’s had nine clients so far and just over a 50-per-cent success rate, meaning a guy goes home with a phone number or a girl. Even though Tim wasn’t one of the lucky ones, Dalie was pleased. “At the beginning of the night his body language was more reserved,” she says. “By the end of the night he was having a good time. The next day I said to him, ‘You see, there’s nothing wrong with you. Women are willing to talk to you—next time just take a chance.’ ” Sounds like the kind of advice you get from mom, for free. fî’îl 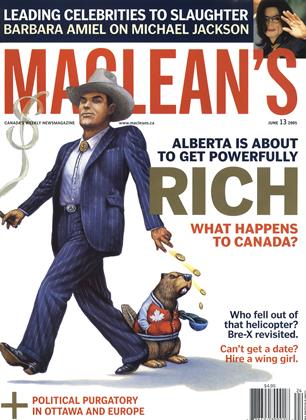