If you think that Mark Zupan is crazy for playing full-contact quadriplegic rugby, consider his upcoming guest appearance on MTV’s Jackass. “I did a wheelchair long jump, off a ramp, into a swimming pool,” says Zupan, the 30year-old star of Murderball-the award-winning documentary about the bitter rivalry between the U.S. and Canadian wheelchair rugby teams. “We also did the black-eye game on Jackass. Steve0 and I rammed into each other, on wheelchairs, fist first. Luckily, I can take a punch. I didn’t even get a black eye.”

After all, the Austin, Tex.-based civil engineer, who doubles as the heavily tattooed captain of the U.S. squad, is accustomed to taking punishing blows. And while laid-back off the court, Zupan, who’s been confined to a wheelchair since snapping his neck in a drunkdriving accident in 1993, is fearless in battle. “I’ve broken a couple of ribs and some fingers on the court,” says Zupan, who is part of Reebok’s new “I Am What I Am” ad campaign. “But why wear a helmet? It’s not like I’m going to break my neck out there.” JOHN INTINI

“On the court, Mark and I try to knock each other out of our chairs. We really go at it. But afterwards, we’re the first to go get a beer together.” -Team Canada co-captain Dave Willsie

John Singleton overestimated his negotiating skills with Hustle & Flow, and it proved costly. “I thought I could just tell Hollywood studios that this script is hip and cool and they’d fall to their knees wanting to do it,” says Singleton, best known for his 1991 student film-turned-international hit, Boyz n the Hood. “That didn’t happen, so I had to pull out my wallet, roll the dice, and produce it myself.”

Written and directed by newcomer Craig Brewer, Hustle & Flow is the story of DJay (Terrence Dashon Howard), a Memphis pimp who dreams of becoming a rap star. “The rules of moviemaking have changed a lot recently,” says Singleton.“Many black directors are doing big He’s not a mainstream great fan of movies with nonslapstick

a lot of white directors are doing films with mainly black casts. Taylor Hackford did Ray, Paul Haggis did Crash and now Craig. It’s great for American film.” But Singleton, who got back behind the camera to direct Four Brothers (Aug. 12)-afilm, starring Mark Wahlberg, about adopted brothers (two black, two white) avenging the death of their mother-complains that too many black movies these days are bad comedies. “I’d never do the slapstick dumb stuff,” he says. “But I’d think of doing comedy the way Richard Pryor would do it. Making serious things funny by being smart.” J.l.

Books I No Bruce Willis, please

David Sedaris will watch just about anything. But the famous humorist, who sees a movie a day, draws the line when it comes to one particular action hero. “I won’t pay to see a Bruce Willis film,” says Sedaris, 48, who is currently on a reading tour with his most recent bestseller, Dress Your Family in Corduroy and Denim. “That guy just rubs me the wrong way.” Sedaris, who was raised in Raleigh, N.C., but now splits his time between London and Paris, shared some of his trademark wit with Maclean’s Associate Editor John Intini.

ON HIS LOVE FOR CORONATION STREET “All U.S. soaps are about two filthy rich families competing to own a town. Everyone is impossibly beautiful and you only watch to see what Dorian is going to wear to the governor’s ball. But in English soaps, they’re not even normal looking. They’re all ugly and poor and it’s so much better,”

ON THE BEST GIFT HE’S RECEIVED “Last Christmas, my boyfriend, Hugh, bought me a 17th-century Dutch painting of a woman changing a dirty diaper. In it, everyone in the background is gagging. Many artists painted the five senses. This one is all about smell.”

ON HITTING THE GYM

“My dad used to do sit-ups that made him look like a bear cub trying to grab a honey pot with his elbows. Now, I do the same ones. I don’t like gyms, mainly because of all the TVs. But a friend in Paris goes to a class that involves jumping around with grandmothers, which sounds quite nice.” ON NOT EVER WRITING ABOUT SEX “I read out loud a lot, and people picture me doing what I’m talking about. If I say, ‘I was drowning a mouse,’ people picture me with a bucket and a mouse. It just doesn’t behoove anyone to picture me having sex. I guess I’m either prudish or sensible.”

I Humour keeps a Deadman awake at night

is a huge true-crime fan. So much so, the Vancouver rocker recently read a biography of serial killer Jeffrey Dahmera Christmas gift from a close friend. But on the band’s current North American toür-in support of its latest CD, Gasoline-he’s lightened up his bedtime reading.

If Chins Could Kill, by Bruce Campbell. “It’s the autobiography of the B-list actor who was in Army of Darkness. I’ve always liked him as an actor. He’s one of those guys you’d like to hang out with. The book is all about his life growing up and how he got into acting, but never really did much. He tried to be on the A-list but was always picked to be killed first.”

Our Lady Peace steals top spot from a criminal mind

Considering that Rick Campanelli has been a MuchMusic VJ for about a decade, no one’s more qualified to name the best Canadian music videos of all time.

8. Check the OR, Organized Rhyme

Books I Coming of age, Canadian-style

“There is a town in north Ontario,” Neil Young sang. And in northern Manitoba, and southern Newfoundland, and everywhere else in Canada. Every year the nation grows more urban, and farther from its rural past. And every year we are still drawn to stories set in the hard times or hard places of that past. The Sundog Season is a finely written addition to a genre that shows no sign of waning. Author John Geddes, Maclean’s Ottawa bureau chief, grew up in the mining settlement of Cochenour in northwestern Ontario. It’s the model for his fictional West Spirit Lake, where his nameless 13-year-old narrator has to cope with the mysterious new cop now coaching his hockey team. For all the verisimilitude Geddes’s own experiences give his novel, it’s his razor-sharp memory of what it felt like to leave childhood for the world of adults that makes The Sundog Season a coming-of-age story with a difference.

Jennifer Hedger, TSN’s husky-voiced SportsCentre desk jockey, fondly remembers her first gig behind a microphone. It was at a Grade 8 public speaking contest, and the Lambeth, Ont., native’s winning speech about waitressing earned her a dictionary, a thesaurus and (“most importantly”) a $100 cheque. Hedger, 29, finished Maclean’s Associate Editor John Intini’s sentences.

THE CREEPIEST FAN MAIL I’VE EVER RECEIVED., was a weird satanic bible from some guy when I was working in London. I think he was a bit schizophrenic. THE LOW POINT OF MY SPORTS CAREER WAS.. on the backyard rink with my dad when I was about seven. My skate got caught in a rough patch and my

stick went up and clipped him in the lip and we were off to the hospital for stitches. We wore helmets from then on.

MY FAVOURITE AD JINGLE. is Still “two all-beef patties, special sauce, lettuce, cheese, pickles, onion on a sesameseed bun.” I liked Big Macs, but to be honest, I was always more interested in getting the toy.

I LOVE THE WORD... dude. I call everyone dude. It’s especially helpful when you forget a person’s name.

I NEVER GO. to church. I went to Sunday school as a kid, but, in Grade 8,1 was allowed to make my own decision about it. I’ve only been back for weddings. 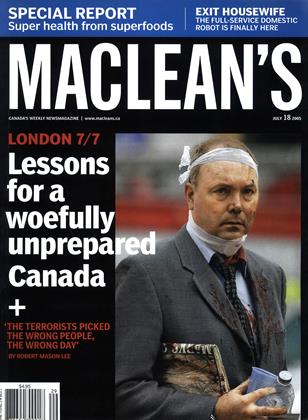