HE HAS A SYRUPY drawl, faith in the power of prayer and a track record of raising hundreds of thousands of dollars for candidate George W. Bush. David Wilkins, the new American ambassador to Canada, is a state lawmaker from Red America who, as co-chair of the Bush-Cheney campaigns in his home state of South Carolina, won the Texan’s gratitude by clearing his path to the White House in the bare-knuckle primary of 2000. But the choice of a conservative good ol’ boy struck many in secular, liberal Ottawa as

about as sensible as sending the unilateralist John Bolton to the United Nations. Outgoing envoy Paul Cellucci had failed to ease cross-border tensions over the war in Iraq, missile defence and trade—and he hailed from largely liberal Massachusetts. Someone was needed to smooth the bilateral feathers. But will the new guy only ruffle them?

speech to the state legislature where he’d served as speaker for almost 11 years. It was thick with religious references, which only underscored his record of co-sponsoring bills that included a ban on gay marriage and equal rights for the unborn. But faith and ideology are only part of the Wilkins story, and he’s eager to transcend the cartoon. Tall and balding, trying to relax amid the detritus of packing at his family home in Greenville, S.C., he was

Wilkins welcomed Bush to the state legislature in Columbia, S.C.

taking the fuss in stride. “They’re already having fun with me,” the good-humoured 58-year-old chuckled.

Greenville is home to Christian fundamentalist Bob Jones University. Its downtown closes on the Sabbath. In these parts, a politician mentioning God is as unremarkable as one who kisses babies. But, explains J. Warren Tompkins, “You’re not getting a Biblethumping politician.” Tompkins is a long-time political consultant and former chief of staff to the state governor who’s known Wilkins for 20 years. Canada, he says, is “getting a charming gentleman in the highest Southern style.” But Wilkins, a Baptist who can trace his roots in the area to at least the Civil War era, acknowledges that faith is very much a part of what he is. His farewell speech to the legislature, he said, “was very natural for me. I have a strong faith and I am not apologetic for it. I’m not going to impose it on anyone, but I’m not going to shy away from it either.”

He doesn’t seem to be a throwback, though. During his interview with Maclean’s, Wilkins scolded a local photographer for picking a “patriarchal” seating arrangement for a family portrait. He speaks reverentially of his wife of 34 years, Susan, whom he calls “my rock.” They met as students. Wilkins studied history and political science at nearby Clemson University on a full tennis scholarship (he still plays), and earned a law degree at the University of South Carolina. Susan briefly taught primary school and is a tireless volunteer. Son Robert, 28, has entered the family law practice, and James, 29, studies environmental science in New Hampshire.

Susan predicts her husband’s sense of humour will be an asset. It has so far. When a CBC Radio interviewer asked him to sing

0 Canada shortly after his nomination, Wilkins, who has been north of the border only once in his life, on a long-ago jaunt to Niagara Falls, was caught flat-footed. Now he jokes about holding' a press conference “to answer questions about everything that

1 don’t know about Canada.” Meanwhile, he is cramming Canadian politics, and his wife is learning about the finer points of life in Ottawa, from the proper pronunciation of “Rideau” Canal to the nutritional composition of Beavertails (which, the elegant blond confesses, “sound very fattening”).

They both intend to take French lessons and to travel extensively, including a visit to the Calgary Stampede. But first on the agenda is a heart-to-heart with Prime Minister Paul Martin. “I want him to get to know me,” says Wilkins. “And I want to get to know him and hear every issue he has.” His strategy for dealing with Liberal politicians will be simply to “listen. People are people. You need to respect each other, communicate, and hear each other’s views.”

In truth, Wilkins has a reputation as more of a can-do pragmatist than an ideologue. “Canadians are much more liberal, but he is flexible and understanding and is willing to listen,” said Kent Williams, an African-American Democratic state legislator. First elected in 1980 as one of only 18 Republicans in the 124-seat legislature, Wilkins steadily built the state party through dogged fundraising and recruitment. Yet a

majority of Democrats elected him chairman of the judiciary committee.

When Republicans took over the state House of Representatives in 1994, he became the first Republican state speaker in the South since Reconstruction ended in 1877— his proudest moment in politics. The second was removing the Confederate flag from atop the state house dome where it had flown for decades. After African Americans organized an economic boycott of the state, Wilkins bucked a majority in his own party and forged a bipartisan compromise that

moved the flag to a monument elsewhere on the capitol grounds. “I did not consider the Confederate flag to be a symbol of hate,” he says. “But I understood that some people felt very strongly that it was.”

The incident set off a political storm that tested him politically and personally. “I was told by members of my own party that I would bring ruin upon Republicans,” he recalls. “My wife received threatening phone calls. It was a tough 12 months.” But Gilda Cobb-Hunter, an African-American Democratic state legislator who fought to have

the flag removed to a museum, says Wilkins “deserves credit” for at least getting the flag off the dome.

Cobb-Hunter, who spent three years as Democratic state leader, says Wilkins “does not like confrontation or controversy,” and predicts he would raise disputes with the Canadian government quietly, “behind the scenes. I’m not suggesting he’s a moderate or a liberal—heaven forbid,” she laughs. But she notes that his political style has “mellowed” over the years, away from an earlier, partisan, “in-your-face” approach. “He started out being a speaker for the Republicans and evolved over the years to be a speaker for everybody.”

In Canada, Wilkins acknowledges, he will be carrying out—not making—the policies of the Bush administration. And his loyalty to the President, whom he has supported since Bush was still Texas governor, is absolute. “To me, [Bush] is a real leader. He knows what he believes and he knows where he wants the country to go.” But at least one former Democratic envoy thinks Wilkins has what it takes to help Canada and the United States “turn the page” on an era of strained relations. James Blanchard, a former ambassador under Bill Clinton, says Wilkins’s political seasoning gives him “the qualities you need.” The most important? “Being the ear of the President.” As for Wilkins’s old sparring partner, Cobb-Hunter, she is waiting to see how this grand experiment unfolds. “I know your country, and it will be different for him,” she muses. Then she smiles and adds, “I would love to be a fly on the wall.” 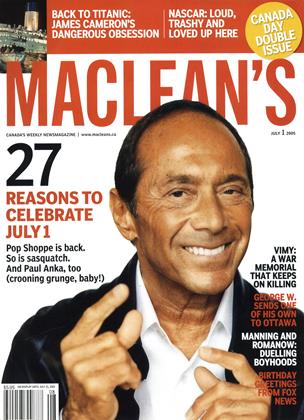