Maybe you haven’t heard so much about that last one. So off I went to Montreal to find out why the Orchestre symphonique de Montréal isn’t playing. In a way it’s just another labour spat, with management and union miles apart and mad as hell. Scott Feltham, a string bassist in the orchestra, told me that depending on how you count it, management is offering an eight per cent raise over five years. The musicians want 48 per cent for the

same period. Small wonder that this 18-week strike is the longest one at the OSM anyone can remember and, Feltham told me, the second-longest North American symphony strike in 40 years.

Still, if this were only about money it’d be simple enough.

Split the difference, everybody lick their wounds, back to work.

No such luck. In a broader sense, the OSM strike is part of a broader crisis in the industry of big culture.

Madeleine Careau, the OSM’s general manager, explained it to me, but it’s a familiar tune.

In the 1980s and 1990s under Charles Dutoit, the OSM was one of the world’s great recording ensembles—39 tours, 89 CDs. But it was easy to record back then. High culture will never again see anything like the arrival of the compact disc, with its crystal clarity and long play time. Millions of people were replacing huge vinyl libraries with CDs. The market for recorded classical music was bottomless. And record companies paid handsomely for new releases of the blue-chip repertoire.

Say farewell to all that. The CD market became super-saturated. The Berlin Wall fell, to reveal good orchestras willing to work cheap. The recording industry collapsed in a mergers-and-acquisitions-and-bloodcurdling-implosions cycle that orphaned even some of the pop stars who used to pay the bills, not just the prestige niches like orchestras.

incredible five-year silence—it will be paying for musicians’ salaries that used to be on the record company’s dime. That’s $150,000 in new charges per CD.

Fine. So don’t record. Stay in Montreal and play to the local crowd. Problem: the local live-music market is saturated too. Montreal has an Orchestre Métropolitain that sounds quite good lately; specialized orchestras for newly composed music; chamber orchestras, including the formidable Violons du Roy; and more, more, more. Touring isn’t about pride or luxury at that point, Careau says. It’s a survival strategy. “We have to take pressure off the local market. We have to create rarity.”

Essentially, like so many organizations that vie for the scarce time of intelligent people—museums, publishing houses or, come to think of it, this magazine—the OSM needs to relaunch. Record sales feed demand for tours; tours feed demand at

home for the travelling heroes. And a dashing, globally renowned new artistic director— the California-born conductor Kent Nagano, who is to preside at the conductor’s podium from 2006—gives the whole business a dose of glamour and seriousness.

So shame on the musicians for ruining it with their exorbitant salary demands, right? Wrong. The striking musicians have a very simple point: it’s all very entertaining if Kent Nagano shows up and waves his stick, but if the band in front of him sounds like Bob’s Orchestra instead of the legendary Orchestre Symphonique de Montréal, s’il vous plaît, then the delicate soufflé of recordings and tours and starstruck crowds will just collapse.

And the musicians say they’re not getting paid enough to stick around.

Feltham, the young bassist from St.John’s whom the striking musicians sent to me to deliver their pitch, is an easy guy to like. His marriage and his stint as a union negotiator began more or less simultaneously two years ago. “So my wife doesn’t know me yet.”

OSM musicians are paid about 20 per cent less than their peers in Ottawa’s National Arts Centre Orchestra. Way less than musicians in the big U.S. orchestras. To Feltham it’s obvious: fine musicians, over time, will leave for jobs where they’re paid right. Feltham worries that the current OSM management won’t even notice. He talks about a principal bassist, hired from a big U.S. orchestra, who turned right back around and quit for home within months. Over time, that sort of thing will doom an orchestra to mediocrity.

I’ve spared you the bitter back-and-forth that makes this a far from genteel spat. The musicians position themselves as guardians of ageless standards of quality. Management brings word of harsh new realities. They’re both right, and their visions are quite incompatible. It’s a nasty business. li1] 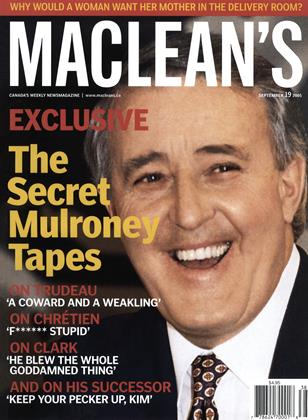