MID-MORNING ON A WARM summer day at the dentist’s office. A teenage boy and his mother enter the waiting room. Judging by her cellphone conversation, she’s a medical professional: “Let’s put her on the stronger medication,” she says authoritatively. Ms. Meds, slim and energetic-looking, is wearing a lingerie-style tank top in which her tidy cleavage is very visible, at eye level, really, with her son who is immersed in a magazine and doesn’t seem to notice. Then again, why would he? Breasts are visible everywhere these days, rendering the idea of a young male sneaking a peek at any free-floating pair, even his mom’s, obsolete.

Long ago, the mere sight of powdered cleavage in a ball gown would send a male into an erotic swoon. And just a few decades past, breasts were something a woman let loose at night, when she was trying to be glamorous, even a bit tarted up. Today, however, breasts are no longer remotely a woman’s private property. They are frontline accessories, so visible that if you don’t particularly want an eyeful in many public places, it gets to be a problem where to direct the gaze. One Toronto businessman reported seeing, on his way to work recently, a teenage girl displaying awesome cleavage while reading Harry Potter, and an alluring woman wearing a religious head scarf but leaving her breasts exposed in a tantalizingly low top.

We are clearly living in The Age of Cleavage. Think of Justin Trudeau’s lovely bride Sophie, luminous on her wedding day last June in a dress with a seriously plunging neckline. And recently there was a newspaper photo of actress Susan Sarandon, surely one of the most glowing icons of female middle age, at a Toronto International Film Festival party, and her cleavage yawned from her collarbone to her navel.

Not all the bosomy abundance out there is as nature made it. Comedian Joan Rivers was asked on an A&E documentary to come

up with one word to describe breasts today and, ever succinct, she replied “plastic.” It’s certainly a word that aptly describes the strange trajectory of the most infamous pair of Canadian celebrity breasts— those of bombshell Pamela Anderson. For at least 13 years, Anderson had implants that enlarged her breasts to a sizable 36D. Then, eight years ago, she had them removed because, she said “having these large breasts didn’t feel right anymore.” But in 2005, Anderson announced she had gone back under the knife for bigger breasts because “I hated being without them. It was like, ‘Where are my pals?’ ”

Of course, we expect such inanity of celebrities, but how are we to explain the dramatic increase in breast-augmentation surgery among ordinary women? The numbers from the U.S. are startling—at least a 257 per cent increase in implant surgery since the late ’90s. In Canada, where numbers are not

readily available because breast augmentation is considered private surgery, the figure most bandied about is that between 100,000 and 200,000 women have had the operation, with 80 per cent of them doing it for cosmetic reasons (as opposed to, say, reconstruction following cancer surgery).

There’s a growing sense that getting breast implants is as minor a procedure as getting a filling. Reality makeover shows mostly depict breast surgery as no big deal. American TV news shows have reported a mother/ daughter breast-implant fad, with 20/20’s John Stossel making waves in June when he detailed how U.S. parents were giving their daughters breast implants as graduation presents.

Clearly, there’s an idealized breast out there, round and very full. Trouble is, it doesn’t quite go with another ideal—the slim, slim torso. Those Victoria’s Secret

models, for instance, with their slender bodies and major boobage—this is not.an anatomically normal set of events. No exercise, diet or potion can produce those contradictory proportions for most women. But surgery can.

Yet, while some women decry this surgical search for perfection, many others insist it’s their right and choice to do whatever they damned well want with their breasts. Internet websites are filled with women who express almost poignant satisfaction after having had implant surgery. (Paradoxically, though, studies show women who receive breast reductions have a much higher rate of long-term satisfaction than those who go for implants.)

Some of the increase in breast augmentation has to do with the fact that in the early ’90s, the procedure tailed off after a major scare about the safety of silicone gel implants. Complainants said they leaked, hardened in the body, caused scarring, and promoted autoimmune disorders. Plastic surgeons and manufacturers have consistently maintained silicone gel implants have never been conclusively proven to be harmful. But one implant maker, Dow Corning Ltd., had to pay out US$3.2 billion after losing a class-action suit.

Silicon gel implants were withdrawn in 1992, and women turned to saline alternatives, widely considered to look and feel less natural. But in Canada, versions of silicone gel implants have been quietly available, and thousands of women, through their surgeons, have applied to Health Canada under a “medical emergency” provision to receive them. “What exactly is the emergency here?” asks a caustic Anne Rochon Ford, coordinator of an advocacy group called Women and Health Protection. “Does a woman’s feelings about her small or sagging breasts constitute ‘a disease?’ Maybe the real emergency is the critical work needed to help girls from a young age be happy with their bodies so they don’t find themselves later willing to be subjected to having products of dubious safety implanted in them at great personal risk and financial cost.”

An advisory panel put together by Health Canada will hold public hearings in Ottawa on Sept. 29 after being asked by two manufacturers to approve the réintroduction of silicone gel inserts on the market. It’s hard to know what will come of just a day of presentations which, according to synopses on the

Health Canada website, will include a hodgepodge of perspectives. Everything from the woman who says that as a result of the surgery “my confidence level has improved to a level that is actually helping me with my work productivity,” to the breast-implant recipient who reports having a “rock-hard breast,” to the unnamed plastic surgeon who promises to discuss how silicone gel inserts “simply offer women another safe choice to correct a psycho-anatomical defect.”

As the hearings approach, women’s health advocates and politicians who deal in women’s issues are speaking out. Ontario NDP deputy House leader Marilyn Churley, who introduced a bill in the Ontario legislature last May calling for a breast-implant registry to track problems, points to a B.C. survey showing women who have had implants are four times as likely to seek medical attention for their health problems, even years later.

Kathleen O’Grady, research associate at the Simone de Beauvoir Institute at Concordia University in Montreal, just wishes there was more public data on breast augmentation. “The problem,” she says, “is that it is a private surgery and there are no records—we don’t know who’s getting them, we don’t know what health problems they’re having, we don’t know if they’re happy with them. It’s a shame.”

But outspoken Toronto plastic surgeon Dr. Robert Stubbs says sarcastically that a breast-implant registry would “probably be as successful as the gun registry. It’s an invasion of privacy even if it is voluntary.” Stubbs describes himself as a “psychosurgeon—I enjoy choosing my patients and seeing how surgery would change their lives.” He says we live in an era in which “beauty is now available, it’s affordable; 100 to 200 years ago, beauty was rare—most ladies were not terribly attractive.”

Maura Spiegel, co-author of a quirky little volume called The Breast Book, observes that we have obviously “moved far, far beyond vanity being one of the seven deadly sins. Now it’s almost a sin not to improve yourself, and self-improvement and makeovers are a mark of self-respect.” One wonders, though, how much self-respect a woman can have in entering a contest, like ones that have taken place in Western Canadian bars, where the prize is a free breast-implant procedure. With that kind of bizarre trivialization of major surgery, you could almost call it a booby prize. 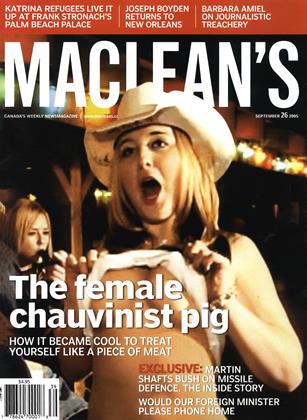