T. S. ELIOT called April the cruellest month, but it has historically been a good one for stocks. On a statistical basis, the cruellest months for investors are September and October, with September the worst of all. October is feared for its association with two crashes—1929 and 1987. Think of September and October as the stock market’s hurricane season. If there are going to be severe storms, they’ll likely come then.

Since the scariest market sell-offs come suddenly, there is little likelihood that investors can predict whether this will be one of those years of pain. Nevertheless, at a time when global stock markets are behaving with the insouciance that has in the past preceded terror, what bull-slaying developments could come? Here’s my list of five potential nightmares.

The stock market and the global economy have absorbed oil’s run from $25 to around $65 a barrel with impressive equanimity. However, with world supply and demand in delicate balance, it takes little imagination to conceive of events that could send oil to $100 and savage both the stock market and the economy. There is, effectively, no cushion or excess capacity left, so a civil war in Nigeria or Venezuela, a successful al-Qaeda assault on major Saudi facilities, or a new Arab-Israeli war could be worth 2,000 points on the Dow-Jones Industrial Average—with

roughly similar effect in Canada. Oil stocks would also tumble, because investors would assume that far lower oil prices would be the ultimate outcome, and because they would sell stocks on which they had profits as they were forced to dump other sectors of their portfolios at a loss. How probable? Maybe Osama knows, but as for the rest of us, let’s assign odds no worse than 50 to 1. 2. OIL DRAG

Although economists are collectively cheery about the impact of $60 oil on the economy, their confidence today belies their gloomy consensus in all prior years. Until late last

year, there was almost no prominent U.S. economist who was saying that the world economy could continue to prosper with $50 oil. Indeed, some of the heavyweights, like ISI’s Ed Hyman, argued that $50 oil would slam U.S. economic growth down to Eurozone levels—one per cent or so.

Now, the U.S. consensus is that consumers can ride out expensive gasoline and heating costs because their homes’ values have risen so sharply that they can keep tapping their equity with loans to keep the economy rolling. By some estimates, half the growth in consumer spending in the past year has been financed by borrowing against soaring home values. The extra cost of gasoline isn’t a big deal when one’s borrowable equity is up by more than $20,000 in a year.

But house prices can’t keep rising forever. The prospect of a deflating housing bubble, or—horrors—a pricked bubble at a time of

Record-high oil prices pushed the cost of fuel to new levels, as at this Halifax gas station

As the leader in the war on Islamic terrorism, the U.S. should be a target for all those youthful jihadists looking for an eternal ticket to the 72 promised virgins. Although the U.S. is a lot more vigilant than, say, Canada, all the homeland defence spending in the world can’t prevent another attack. Odds against? Let’s guess at 50 to 1.

4. THE FED OVERDOES IT

Alan Greenspan is headed for retirement, and he wants to go out as the man who slew the speculative excesses that threaten the U.S. economy—notably the housing bubble. In all past periods of sustained Fed tightening, long-term interest rates rose. Most importantly, the yield on the 10-year treasury note, which is the basis for home mortgage loan yields, always rose, and that cooled out—or sometimes killed—the housing market, along with other kinds of asset speculation. Not this time.

In what Greenspan calls “a conundrum,” 10-year yields have actually fallen since he began raising the Fed funds rate from its surreal low level of one per cent to the current 3.5 per cent. In percentage terms, that’s the most dramatic Fed tightening ever, but money is still loose, speculation is still robust, and house prices remain, as he puts it, “frothy” in at least some parts of the country. (Greenspan resists using the term “bubble,” because he has never identified a bubble until after it burst, even Nasdaq at 5,000.)

When he was a private economist, Greenspan was known as a poor forecaster. Perhaps that record encourages him to proclaim the impossibility of identifying asset price excesses. Still, he keeps raising interest rates by .25 per cent at every meeting. The gap between his rate and the 10-year yield is now a relatively tiny .8 per cent, aiming toward almost zero by year-end. Flat or inverted yield curves (in which short-term interest rates are as high, or higher than, long-term rates) usually produce recessions. They even more usually produce stock market selloffs. Odds against a sharp sell-off this time? Maybe 4 to 1.

markets begin with excessive bullishness. We’re not there yet, but we’re getting closer.

5. A GLOBAL PANDEMIC The flu virus now circulating among birds and animals from Indonesia to Siberia, known as H5N1, has the World Health Organization scared of a pandemic on the scale of the 1918 influenza that killed vastly more people than died in the First World War. Among the new flu’s characteristics is its 100-per-cent mortality rate among chickens—even in embryos. Every flu known since 1918 has had modest or zero killing rates on chickens.

Why is this important? Because the existing technology for making vaccines is to inoculate chicken eggs. Scientists are scrambling to create a biotech-based vaccine in time to avert catastrophe should this flu mutate into a runaway killer that spreads from human to human. So far, there’s no conclusive evidence the virus has achieved this last, decisive recombination of amino acids on its external shell that would put the world’s human population at risk. But epidemiologists believe it could achieve this breakthrough in coming weeks, months or years. SARS, although insignificant in its threat compared to H5N1, should have been a lesson about marshalling defenses against rapidly moving pathogens, but the world remains woefully unprepared.

Although human deaths from this flu to date only number 55 outside China (which does not release its numbers), it’s worrisome that the mortality rate is 50 per cent, compared with three per cent for the 1918 outbreak. Scientists hope that sky-high rate will fall toward the more manageable three per cent if the virus explodes across the world. They think it will “learn” that it does better by keeping most of its hosts alive—to spread the infection. Odds against such an outbreak? Unknowable, but not outasight.

On balance, then, investors should remain optimistic. Odds are, we’ll come through the fall without a capital-F Fall. All bear markets begin with excessive bullishness. We aren’t there yet, but we’re getting closer. Sleep well—particularly if you have some cash in your brokerage account to buy suddenly cheap stocks. Iffl 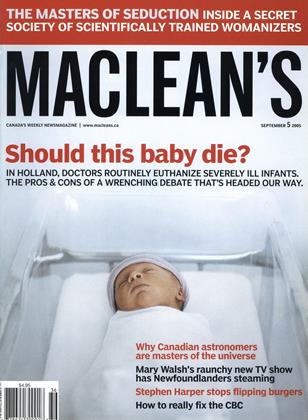