A complex nose with subtle hints of poo

A complex nose with subtle hints of poo

With Match Point, he serves an ace, and lobs a plum role to Scarlett Johansson. But does Allen love the opposite sex, or is he a thinking girl’s misogynist?

In person, as on BY BRIAN D. JOHNSON 0" screen, Scarlett Johansson has a presence that’s so there, so in the moment, there’s an awkwardness to her beauty, as if she doesn’t quite know what to do with the effect it has on people. I first interviewed her in 2003, at the Toronto premiere of Lost in Translation. She was only 18 then—the age Mariel Hemingway’s character finally reaches by the end of Manhattan. But this ingenue already had a world-weary air. Now she’s on the phone from Los Angeles, talking about the sex in Woody Allen’s Match Point. Her voice is raw and husky, as it is in her movies, the voice of someone who always sounds like she’s just getting out of bed. The actress tells a story about shooting a

torrid love scene for Match Point, in a field under heavy rain. While locked in a long French kiss with Jonathan Rhys-Meyers, she felt a metallic taste in her mouth. “It was cold and wet, and we were really ravenously going at each other,” she recalls. “I said to Jonathan, ‘Do you taste blood by any chance?’ He’d split my lip with his tooth in a passionate embrace. He sent flowers the next day—which was a very sweet thing—saying ‘Sorry about lip.’ ”

“Woody was more than I could have asked for. If he asks me to do anything ever, I would work with him in a heartbeat.”

your The mere fact that anyone is being kissed with enough passion to draw blood in a Woody Allen movie is just one of the things that makes Match Point quite unlike anything the 70-year-old director has ever done. It’s a far cry from that creepy moment in Manhattan when Allen envelops Hemingway in a praying mantis embrace on the seat of a horse-drawn carriage in Central Park. Or the thunderstorm scene in Husbands and Wives when he clamps his mouth, lampreylike, over Juliette Lewis and turns away from camera to deliver what we can only hope is a prolonged stage kiss. Sex in Allen’s movies tends to be a queasy-making business, which is why his new movie comes as such a surprise.

Match Point is the most erotic—perhaps the only erotic—movie of his career. It’s also his best work in ages. And Johansson, who has already shot a second picture with Allen, appears to be his new muse, resurrecting his career with a Viagra vote of confidence. “Woody was more than I ever could have asked for,” she says. “If he asks me to do anything ever, I would work with him in a heartbeat.”

Ever since Match Point premiered in Cannes last May, critics have been falling all over each other to sing its praises. As a measure of how far its director has fallen into disrepute, their strongest argument is that it doesn’t seem like a Woody Allen picture at all. Match Point is drama, not comedy. It takes place in London, not Manhattan. It’s fuelled with noir lust, not sentiment. And not only does Allen stay offscreen, but for once his actors don’t turn into Woody clones and adopt his mannerisms.

Yet for all its freshness, and its brisk volleys of Brit repartee, Match Point is classic Allen. Like his best, and worst, movies, it makes you wonder just what is the deal with Woody and women: does he love them or hate them? The easy answer is both. It’s hard to think of another filmmaker—aside from his hero, Ingmar Bergman—who has devoted a career to cultivating actresses and creating such richly observed female roles. But the more you look at how Allen has portrayed women onscreen, the more he begins to look like the thinking man’s (or woman’s) misogynist—a brilliant filmmaker engaged in a lifelong session of cinematic therapy as he grapples with his chronic fear and loathing of the opposite sex.

With a premise reminiscent of Crimes and Misdemeanors, Allen’s new movie is about infidelity, guilt and getting away with murder. It moves like a sharply played game of doubles, organized along explicit class lines. The story concerns an Irish tennis pro named Chris (Rhys-Meyers) who romances Chloe, a sunny English heiress (Emily Mortimer), lines up a cushy job courtesy of her father—then jeopardizes his good fortune by pursuing a dangerous affair with Nola (Johansson), a struggling American actress involved with Chloe’s brother. With Rhys-Meyers exuding the sinister charm of a more nuanced Jude Law, their lust has the pull of quicksand. The drama comes down to the dilemma of a man torn between two beautiful but ultimately unattractive women—a placid English rose who just wants to get pregnant, and a Yank femme fatale who turns into a shrew and threatens to drag our tennis pro back to his squalid working-class roots. The old choice between the mother and the whore.

In writing and directing 36 movies, Allen has created some wonderful female characters, most famously Diane Keaton’s Annie Hall. But his films are also riddled with women who are loathsome, ludicrous or pathetic—Meryl Streep’s ruthless lesbian in Manhattan, the jilted lover played by Anjelica Huston in Crimes and Misdemeanors, Mira Sorvino’s overbearing hooker in Mighty Aphrodite, Mia Farrow as a drab wife in a string of films—and a legion of ditzes, bitches and bimbos embarrassing themselves at cocktail parties.

Spooked by all these scary adult women, Woody makes his romantic fantasy the nymph who’s young enough to be his daughter. She’s the high school kid who dotes on him in Manhattan, the young niece he takes to the movies in Crimes and Misdemeanors, the enamoured

©college for a kiss student in Husbands who begs and him Wives. These Woody nymphs are magical creatures who never really grow old. From Manhattan to Husbands and Wives, he ages by 13 years, but just a two-year gap separates his student lovers in the two films.

After the scandal of Allen’s romance with Farrow’s adopted daughter, Soon-Yi, hit the headlines in 1992, his oeuvre popped into lurid revisionist focus. The news coincided with the release of Husbands and Wives, which was impossible to view as anything but veiled autobiography—with Allen playing a professor testing an inappropriate romance with a student, and Farrow as his long-suffering wife in a crumbling marriage.

But in retrospect, Husbands and Wives stands up as one of Allen’s strongest films, a work of searing, confessional candour with the vérité edge of Cassavetes. Through its female characters, he unleashes ferocious blasts of self-criticism. Lewis’s college student blithely dissects her professor’s “retrograde” view of women. Judy Davis rips through the movie like Simone de Beauvoir on speed. And as Farrow’s character awakes from domestic stupor into a blue rage, she tells her husband, “You use sex to express every emotion except love.” Husbands and Wives was Allen’s last movie that really delved into serious moral issues— until Match Point. In the interim, he churned

out a dozen films, some good and some not so bad, but all harmless confections. It’s as if the Soon-Yi scandal had thrown a shattering light into some secret laboratory, destroying the confidential alchemy that allowed him to transform fear and guilt into art. Now that Soon-Yi is all of 35, and his paternal romance with her has become weirdly normalized, the filmmaker seems to have turned a corner. Rejected by Hollywood, he has found a second wind with BBC financing, British actors —and a young American star who seems thrilled to do his bidding.

This smart blond with the insolent pout, and bold features that reflect her Danish and Polish descent, would not be out of place in a Bergman movie. She has the intensity, and the devotion. Johansson, 21, says she was a huge Woody Allen fan before he hired her, and was nervous about working with him. “But the thing that surprised me is how approachable he is. He doesn’t creep into a cubby hole. He’s always on the set, making script changes or napping or eating a sandwich.”

“Oh yeah. I’ve taken Polaroids of this. He will nap with, like, someone drilling into the wall. He sleeps like a little baby. He looks so innocent when he’s sleeping, his hands folded in a chair.” Working with him is “very intimate,” adds Johansson. “It’s the voyeuristic way he shoots—where you feel you’re this third person leaning in on a horrible domestic dispute with a cup against the wall.” Johansson, who confessed her attraction to older men when Lost in Translation came out, also says she finds Allen sexy. “He has a very sexy brain. That’s the sexiest part of Woody. And his glinting eyes.” Onscreen, that lascivious glint, and his coy smoothie routine of flaunting his sexual prowess, wore thin decades ago. But anyone who’s interviewed Allen knows that in person, he’s no nebbish: he’s warm, charismatic, even debonair. What actors love about him is that he gives them intelligent dialogue and room to act. Unlike most Hollywood directors, he captures performances in long, elegant, uncut takes, and stays out of the way.

“He feels if he gives too much direction, it will interfere with the natural instincts of the actors,” says Johansson. “I constantly question my instincts. When you’re working with someone like Woody Allen, who you admire so much, it’s scary when he says, ‘Do whatever you feel like.’ ”

One day Johansson did just that. The scene was a frantic afternoon tryst between Nola and Chris at Nola’s apartment. As soon as they get through the door, she strips off his tie, blindfolds him with it, then spins him around and unbuttons his shirt from behind. All in one seamless action. “That was my idea,” says Johansson. “We originally had shot a different scene that was really raunchy. Woody said it looked kind of silly. He said, ‘I’ve got to find something that is very racy.’ I said, ‘Why don’t I just use his tie and blindfold him.’ He thought that was brilliant.”

Woody may be film’s Freudian mascot for male insecurity, but he seems to like girls with ideas who take charge—from the teen in Manhattan who gives him lessons in maturity, to Match Poinfs femme fatale who has confidence only in her sexual power. In her next Allen movie, a comedy called Scoop, Johansson costars with the director as a journalist. That’s all she’s allowed to say. But there’s no romance between their characters, she quickly explains, without a trace of regret in her voice. M 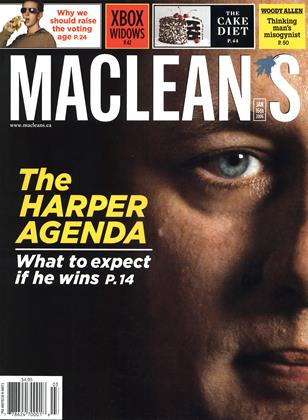