Unreported deaths lead to questions about the scale of Iraqi violence

Ali is a collector of the dead. That’s his job, or at least one of them. He is also a cook at a kebab house in Baghdad and a member of the Mahdi Army, a Shia militia loyal to the militant cleric Muqtada al-Sadr. As a collector, his morbid duty is to sweep up the carnage of a sectarian war spiralling out of control—one that Iraqi officials and their American overseers are trying desperately to downplay—and quietly transport it to Iraq’s main morgue, located in the heavily fortified Medical City in Baghdad’s Bab alMuatham neighbourhood, where all suspicious deaths are taken.

Every three days, Ali says, he and other al-Sadr militiamen go to the Tigris river to pick up bodies. At a spot on the bank just downstream from the Aima bridge in central Baghdad, a series of eddies gently gather in the dead. “More and more are coming there,” Ali says, “from north of Baghdad, from villages like Taji and Balad. Many have their hands tied, most are blindfolded.” The method of execution varies, Ali adds, from the basic bullet to the head to more macabre and viciously novel techniques involving power tools, electric cords and other such domestic instruments. “These are all Shia brothers and sisters murdered by Sunnis,” says Ali, a Shia

militant himself who has carried out his own revenge attacks on Sunnis. When pressed, he admits there “maybe” some Sunnis floating down the Tigris as well. “But they were killed in defence of our Shia brothers and sisters,” he claims. “They are not innocent victims.”

Sectarian hostility aside, there is another aspect to Ali’s work that is troubling: the deaths of the people whose bodies he pulls out of the river often go unreported, leading to questions about the real scale of the violence in Iraq. Even the wildly fluctuating official death counts are a stark reminder that Iraqi, and by association U.S. officials, are attempting to minimize a problem getting worse by the day. Earlier this year, the figures released by the government following the Feb. 22 bombing of the Askariya shrine in Samarra, a Shia holy site, which has been cited as the spark that started the current round of killings, were suspiciously lower than numbers provided by morgue officials. But as for the overall pic-

ture, a September report published by the United Nations Assistance Mission for Iraq paints a grim picture: civilian deaths reached a record high for July and August with 6,600 civilians killed.

Still, even these figures don’t tell the whole story. For that, a visit to Medical City is in order. The Ministry of Health has instituted a strict policy for journalists, requiring them to seek permission before visiting the facility. Those allowed in get only a truly sanitized tour; more often than not reporters are barred from entering. But at the gate, guards who have worked at the facility tell a chilling tale. “Last year, I saw maybe 1,000 bodies a month coming into the morgue,” says one man who, fearing for his life, requested his name not be published. “Now we’re getting nearly 1,000 a week.”

All, he says, are victims of sectarian violence, both Sunni and Shia, but the officials at the morgue inside Medical City will not tell you that. “The officials don’t want us talking to the media,” says another guard, also requesting anonymity. “I’ve heard them telling people that most of the deaths are because of terrorists, but I’ve also seen the bodies myself and I can tell you that most of them were executed by death squads.”

While he describes the bodies, a dump truck pulls out of the facility. The guards open the gate, holding back a rush of people from all over central Iraq hoping to get in to look for loved ones. As the truck passes, the smell of decomposing flesh fills the air. “That’s just the clothes from bodies pulled from the Tigris over the past few days,” says the first guard. “The trucks come and go regularly.” The

stench is overwhelming. People cover their noses and mouths with cloth. Women wail.

When told about this back at the kebab house, Ali simply shrugs. “You get used to the smell,” he says, putting ground beef onto skewers for non-existent customers in a city in which people are too afraid to leave their homes. That job appears to have no potential. But tomorrow, he will be going back to the Tigris to pick up more bodies. That job, at least in Baghdad, has a future. M 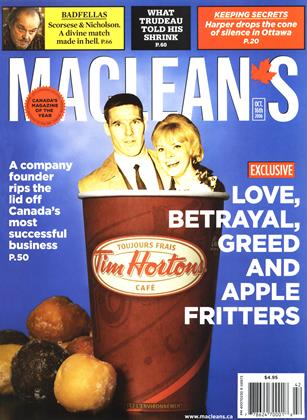