Remember the TV dads controversy? A recent theme in journalism has been the bad image of fathers on television. Pundits like John Tierney of the New York Times and Ray Richmond of The Hollywood Reporter wrote articles complaining that fathers are, in Richmond’s words, “the last subculture in America whom it is permissible to bash and malign with impunity.” What did networks do in response to the complaints? Cut out fathers entirely.

Surveying the new shows this season, it’s clear that fatherhood is no longer much of a theme. ’TilDeath, the new sitcom starring Brad Garrett (Everybody Loves Raymond), is about one couple that’s childless and another couple whose children have moved out. Most of the other male characters on new shows are childless men who aren’t yet required to act like grown-ups, like the guys on Friends. In fact, one of the new sitcoms, The Class, is from a co-creator of Friends, and features a similar group of childless people. The most prominent fathers in the new season are Jeffrey Tambor and John Lithgow on Twenty Good Years, playing two aging dads who mostly treat fatherhood as a distraction from their mission of partying as hard as they can.

Meanwhile, many of the returning shows are the ones that helped create the image of the “doofus dad”: shows featuring a fat oaf with no good advice to give his kids, and a beautiful wife who really ought to take the kids and leave. The networks have brought back Jim Belushi on According to Jim, Mark on Still Standing, and animated insensitive guys like Peter Griffin on Family Guy and Homer on The Simpsons. On other shows, like Gilmore Girls, there’s no father at all, and the kids

don’t seem any worse off for the lack of one.

Rob Thomas, creator of the teen detective show Veronica Mars (which begins its third season on CTV this October), explains one reason why fathers are so often absent on television: it’s economical. “It’s the financial reality of a teen show—you spend all your money on the kids on the show, and when you’re trying to cast big-name guest stars, you don’t have the money to give them two parents.” When they can afford only one parent, producers usually go with a single mother. And that’s the state of fatherhood on TV: if there are kids on the show, the producers create a boorish father, or save money and don’t hire a father at all.

But there are bright spots in the world of television fatherhood, and one of them is provided by Thomas’s own show. Keith Mars (Enrico Colantoni), the father of the eponymous heroine of Veronica Mars, is one of the few TV fathers who, in Thomas’s words, “has his act together.”

Superficially, Mars looks like another clueless dad; his daughter, Veronica (Kristen Bell), is off solving mysteries in every episode, and he doesn’t always know what she’s up to. But unlike the usual parent on shows about superheroic teenagers—like the nice but oblivious mother on Buffy the Vampire Slayer— this exsheriff turned private detective has some

heroic credentials of his own: “As clever as we play Veronica, we always try to play Keith one step more clever.” He points to a favourite moment in one episode, where Veronica tries to get something out of her father’s safe, only to find that he’s anticipated her and booby-trapped it. The father figure, for once, knows more than his kid: “Veronica’s very, very smart, and yet her dad is still her dad.” Also, Veronica is a TV kid who actually learns from her father, which is more than you can say for Bart and Lisa Simpson. Veronica works with her father to uncover the deep dark secrets of the town where she lives, and the implication of the show is that she’s become an expert detective by looking to him as a role model. “Rather than being a show in which Dad sits child down and says ‘this is what you should do,’ ” Thomas says, “he’s more of a lead-by-example kind of guy.” Still, though some critics have pointed to Veronica Mars as an antidote to bad TV parenting—MSNBC.com selected him as the best father currently on TV—Thomas points out that he’s not doing a show in which father knows best; a story arc this season will focus on Veronica being let down by her dad. He adds that it wasn’t his intention to create a role model, but “the fact that he was a good parent was sort of dictated by the fact that I needed her to want to hang out with him.” A father whose child wants to hang out with him? That’s something you don’t see on television very often. M 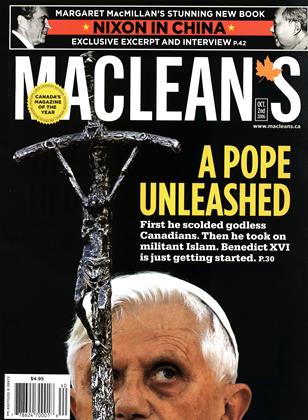