Madonna flew to Malawi last week, and picked herself an infant out the orphanage equivalent of a police lineup. Creepy as the whole affair is, it serves as a useful reminder that if

you want to know where the future is headed, it is worth keeping an eye on what Hollywood celebrities are up to.

The future of babies, it would appear, is no exception. Aside from a residue of dedicated neo-Maithusians who still believe that too many births will be the death of us, we have grown used to the idea that the most important influence on our society’s evolution will be the dearth of kids. To recap the stats: at current fertility rates, every EU country except France, the U.K. and Ireland will be losing population by the year 2050. In North America, Canada has a birth rate of around 1.6 children per woman, with the U.S. birth rate ticking slightly upward over the past decade, from 2.0 to 2.1. But even the American exception is somewhat of an illusion, since its relatively high birth rate is largely a consequence of the high fertility of a few immigrant groups, particularly Mexicans. Most American women are reproducing at well below replacement levels.

What will be the consequences of all this? You can choose from a smorgasbord of doomsday scenarios, the most popular being the disastrous impact of a shrinking worker-toretiree ratio on public finances. Other commentators warn that an aging population will bring on a new Dark Ages of religious fundamentalism, since fundamentalists (of the Christian or Muslim variety) are the only ones having children.

Less widely discussed is the paradox that while we’re having fewer and fewer babies, the cult of babydom is growing. This is just an instance of the economic law that as goods become scarce they become more valuable, and it holds as strictly for kids as for com-

modities. There are hardly any of them around anymore, so babies are becoming a status good. The elites engage in exotic adoption— Madonna’s little Malawian was just a way of one-upping Angelina Jolie’s Cambodian— but this is only the leading edge of the trend. To see how it works among civilians, spend a day in a yuppie enclave where the nuclear family is a power trio comprised of an architect, a lawyer, and a tiny objet d’art named Affon or Schyuler dressed in a designer outfit from BoboBaby while being pushed from Starbucks to yoga class in a $500 jogging stroller. The dynamic is the same, with the child serving as the vehicle for conspicuous display between status-obsessed parents.

Large families used to provide a form of

social insurance, spreading both risk and responsibilities among a number of children while lessening the future burden on the state. In contrast, a small family pins its hopes, its dreams, its very survival, on the success of one or two children. Bluntly stated, it can’t afford to lose one, which affects the attitudes of parents toward risk-taking. My father and uncle carried .22 rifles long before they carried car keys; as primary school suburbanites in the seventies, my three siblings and I spent days roaming the field behind our subdivision, riding our bikes down the train tracks and starting brush fires with magnifying glasses. Today, the children in the little park down the street wear safety helmets on the swing set as anxious parents serve as spotters.

As our population ages, this deep-seated aversion to risk will permeate the culture, with entrepreneurialism and adventurousness giving way to a fixation on comfort and security. People approaching retirement are

less keen on long-term or volatile investments, and to the extent that the economy of the future will be built on creativity, flexibility and innovation, the absence of high-risk venture capital will make us more rigid and brittle. Eventually, our entire social infrastructure will tilt toward the needs of the elderly, as a recent story from Japan serves to illustrate. Tokyo officials want to drive a large highway straight through an old hippie enclave called Shimokitazawa, that city’s answer to Greenwich Village. While the plan has been met with substantial opposition, shop owners’ unions support it, on the grounds that it will provide an escape route in an earthquake and make it easier for emergency vehicles and public transportation to run through the

neighbourhood. As one local landowner explained to the New York Times, the area (like all of Japan) is growing older, and residents are less interested now in bohemianism than they are in safety and convenience.

North America is not far behind. By midcentury, this continent will be a de facto gerontocracy. For the few children who do manage to make an appearance, living here will be like one long visit to grandma and grandpa’s house. Remember what that was like? All the attention was nice, and it was fun to get a handful of sweets or a ride in the old clunker.

But the place smelled a bit strange, and the environment was really not all that welcoming to kids. Fun as it was, it was always a relief to leave. Where the kids of 2050 will escape to, when the whole country is one big retirement village, is anyone’s guess. M 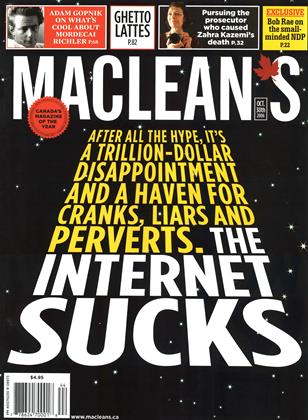