Respect all and trust no one: life in a multi culti world ANDREW POTTER November 27 2006

Noting the proliferation of religious sects in Enlightenment England, Voltaire commented that it was a nation of many faiths but only one sauce. Behind the dry wit was an astute observation about the merits of religious

heterogeneity: “If there were only one religion in England, there would be danger of despotism, if there were only two they would cut each other’s throats; but there are 30, and they live in peace.”

For Voltaire, there was no necessary tension between diversity and a harmonious civil society. A liberal polity could tolerate people of any and all opinions, save those who refused to extend the same toleration to others. Live and let live, in other words, a credo that has animated liberal thinking for the past 250 years.

That conviction was dealt a stiff blow recently by the American sociologist Robert Putnam, who presented his latest research in a series of talks in Britain last month. According to Putnam, in the face of largescale immigration and increased diversity, people tend to “hunker down” and “act like turtles.” They become less open and more distrustful of one another, he says, and the bonds of community are stretched to the breaking point. And it is not just that diverse communities tend to fragment into a checkerboard of homogeneous but tight-knit clans. As Putnam puts it, the problem is that in diverse communities we not only mistrust people who don’t look like us, we also mistrust people who do.

This research won its author Sweden’s prestigious Skytte Prize in Political Science. It also won him an unfamiliar group of friends: racists, anti-immigration activists, and rightwing nationalists who thought that they’d been given a hefty new club with which to beat the soft skulls of multiculturalists. For a self-styled progressive like Putnam, this

reaction was agonizing, since he does not believe that America, Britain, or any other country needs to rethink its policy of open immigration. If increased diversity leads to the corrosion of community in the short term, our long-term project must be to construct a broader and more inclusive civic identity. America did it once—when it assimilated millions of Irish, Italians, Poles, Germans, Jews, etc. in the first half of the 20th century—and there is no reason why it cannot do so again.

Putnam recognizes that this stuff is polit-

ical dynamite. He told the Financial Times that he had actually put off publishing his results until he had come up with some proposals for mitigating the negative effects of diversity on community. Even so, John Lloyd of the FT was probably right when he called Putnam “a liberal who seems to shrink from the impact of his own findings.” It is one thing for America to look to its past for ideas about how to successfully assimilate newcomers, but it is something else altogether to assume that every country can pull it off. If anything, pessimism would appear to be the appropriate attitude, given the worsening situation in France, Holland, Britain, and so on.

When it comes to nurturing social cohesion in the face of diversity, a country can choose from three broad approaches: coercion, conversation, and competition. Coercion, in which social conformity is enforced by the state through religious intolerance and linguistic suppression, is effective but brutal, and most modern countries now reject it as unjust. Then there is conversation—a commitment to dialogue and rational inquiry— which in 18th-century England enabled the members of 30-plus religious sects to get along. The very fact of religious heterogeneity led people to question the foundations of their beliefs and to be suspicious of

anyone claiming to possess the final truth.

Finally, there was what fired the melting pot of assimilation in pre-New Deal America: the brutal realities of capitalism. Economic striving brought people of all creeds and colours into close proximity, which blunted and buffed the rough edges of their various cultures. More than any other factor, the marketplace is what made Americans alike.

What really distinguishes the current political climate is official multiculturalism, whose effects in many countries have been to insu-

late immigrants and minorities from the homogenizing forces of conversation and competition. In 18th-century England, the difference between a Lutheran and a Methodist was the sort of thing about which one could (even should) argue and debate. But when religious disagreement is treated as an essential cultural trait—they are Jewish, we are Muslim, end of story—there is no reason for tribes to interact, let alone try to get along. Following similar lines, one effect of universal welfare has been, in some countries, to lock immigrants into low-employment ghettos. France is only now starting to understand that far from appreciating the hand of state that feeds them, ghettoized groups resent it.

So where does that leave us? Forced assimilation is out. As for the welfare state, there is no widespread appetite for leaving people to the sink-or-swim logic of the job market. Are there other possibilities? Putnam thinks the old workhorses of popular culture and public education will do the trick. More likely, the breakdown of community and the demise of social cohesion will become just another unfortunate aspect of modernity we are going to have to learn to live with. M 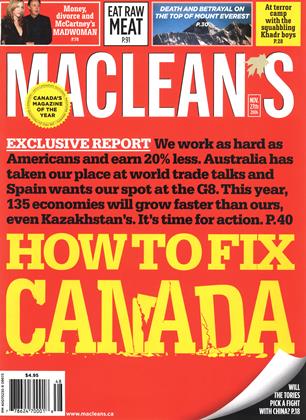