help For boys who will be boys p.72

“Throw the Jew down the well, so my country can be free,” sings the lead character of a new movie. And he’s not the villain, either. He’s Borat, the Kazakh character who’s been spun off into the new film Borat: Cultural Learnings of America for Make Benefit Glorious Nation of Kazakhstan. And yet in the context of today’s comedy, it’s really not all that unusual to have a comic character saying racially insensitive things. It’s politically correct to be politically incorrect.

Nathan Rabin, critic for The Onion’s A.V. Club, foresees that “a generation raised on South Park, Borat Jackass and Wonder Showzen is going to have a much different conception of what is and is not appropriate than generations raised on tamer fare.” Borat isn’t the limit of how offensive comedy will get.

Borat is really Sacha Baron Cohen, the English comedian whose other characters include Ali G, a cockney who thinks he’s a hip-hop gangsta, and Bruno, an Austrian fashion expert. Cohen’s method is to become someone really annoying or utterly despicable, go out in public, and embarrass the people he meets.

to people who don’t seem quite sure he’s joking. And it’s that kind of uncertainty—the puzzlement over whether he’s joking or not— that defines the success not only of Cohen, but of Stephen Colbert and Sarah Silverman and many other contemporary comedians who succeed by becoming the people they hate.

Cohen was one of two superstar comedians whose careers were launched on England’s The 11 O’clock Show; the other was Ricky Gervais (The Office). Cohen’s character on The ll O’clock Show was Ali G, a parody

of white British people who think they can be cool by imitating black culture. He soon became the most popular thing on the show; a commentator on Usenet wrote: “when Ali comes on, the audience cheers and the presenters look vaguely uncomfortable with the fact that everyone is watching just for him.”

A year later, Ali G had a spinoff, Da Ali G Show, in which he interviewed real people and flummoxed them with his ridiculous questions (“Does Jesus really exist, or is he just your father dressed up?”). The show also introduced Borat, who did much of what Ali G did, but with a different accent. One sketch featured Borat going to a Texas hunting resort and getting someone to agree with him that “the big-nosed people” are causing trouble all over the world. “It is a shame you cannot hunt the Jew,” Borat commented.

much in his own life. Any story on Cohen the man, as opposed to the comedian, mentions the fact that he’s not only a Jew but a religiously observant one. He belonged to a Zionist group at Cambridge, and underneath the Tommy Hilfiger skullcap he wore as Ali G, he was wearing a yarmulke, a Jewish skullcap. This past year on Oct. 2, Yom Kippur, the Jewish day of atonement, Cohen was spotted in a synagogue in New York, where he got to go up and recite the “priestly blessing.” But according to Gawker.com, he wanted to hang around only long enough to do his duty by

his faith, not long enough to be seen breaking character: “He ducked out of the synagogue minutes before the service ended, which left some wondering if they actually saw him.” You’d be forgiven for wondering if anybody has truly seen Cohen in public for years. He never gives interviews as himself, instead appearing in character as Ali G or Borat. His personal life never finds its way into gossip magazines, even the notoriously prying British publications. When the Guardian did a profile of him earlier this year, the most they could come up with was the identity of his fiancée (actress Isla Fisher) and a few interview quotes from people who knew him in college. But if all you know about an actor is that his old classmate recalls him “doing very well in Cyrano de Bergerac,” then you’re never going to see him on the cover of People magazine. All we really know about Cohen, then, is that he’s a Jew who’s becoming a movie star by playing a funny Jew-hater.

It’s not new for Jewish entertainers to parody those who hate them. Mel Brooks came up with Springtime for Hitler, after all. What makes Borat different is that he is an anti-Semitic character presented as the lead; he’s not heroic, but if the Borat movie has any kind of hero, it’s Borat himself, the happy idiot trying to make good. And the more racist and offensive he gets, the more the audience laughs.

The gold standard for hilarious racism is Archie Bunker, the bigoted father on the U.S. sitcom All in the Family (based on the U.K. sitcom Till Death Us Do Part). In the 1970s, when All in the Family was the No. 1 show on TV, there was controversy about what it meant for the world’s most popular fictional character to be a guy who said things like (to Sammy Davis Jr.) “Your being coloured, I know you had no choice in that, but what made you turn Jew?” Laura Z. Hobson, author of the bestseller Gentleman’s Agreement, attacked the show for presenting “a comic, likable figure who made bigotry more attractive,” and others feared that people were watching because they agreed with Archie.

But if Archie Bunker was an isolated phenomenon in his time, today there’s been an explosion of characters in the Bunker tradition. It’s not only Borat who gets away with racist jokes in the name of satire. Eric Cartman, the most popular character on South Park (which just started its 10th season in Canada on The Comedy Network), is a racist, antiSemitic little kid who in one episode tried to wipe out the Jews. The stand-up comedian Sarah Silverman has crafted her comic persona around being a pretty young woman who makes racist jokes, and she’s been so successful at it that she got her own movie, Jesus is Magic, where she sang “I love you more than Asians are good at math.”

There are other comic characters who, if not exactly racist, are supposed to be satires of people the creators clearly find unpleasant. Stephen Colbert, the star of The Colbert Report, does the whole show (including the interviews) in character as a satire of rightwing TV pundits. In Archie Bunker’s time, it was unusual for the star of the show to be a character who’s supposed to be wrong about everything. Now it’s almost de rigueur.

The difference between Cohen and some of these other comics is that he doesn’t try to reassure the audience. Rabin points out that Colbert “gives away the game a bit by having graphics that contradict what Colbert’s saying and betray his actual opinions.” But because Cohen is such a mystery as a person, and because he never breaks out of character to tell you what he really thinks, he never gives you the comfort of knowing for certain that he’s really on your side.

A potential problem with these characters is that, as with Archie Bunker, you can’t always tell if people get the joke. The comedian Dave Chappelle, who uses racial stereotypes to lampoon racism, had a crisis of confidence when he started to wonder (according to Time magazine) “if the new season of his show had gone from sending up stereotypes to merely reinforcing them.” And now the popularity of Borat has caused some groups to wonder whether this character is going to give aid and comfort to racist groups; the Jewish Anti-Defamation League issued a solemn “Statement on the Comedy of Sacha Baron Cohen, a.k.a. ‘Borat,’ ” in which it concluded that Cohen wasn’t a self-hating Jew, but worried about the potential effects of Cohen’s comedy: “The audience may not always be sophisticated enough to get the joke, and... some may even find it reinforcing their bigotry.” In other words, the group fears that the movie may have a bad effect on people who are less sophisticated than they are.

Rabin thinks these concerns are mostly limited to people of an older generation, who aren’t used to ironic humour: “Kids intuitively just get it. It’s the adults who have problems wrapping their head around it.” He illustrates this with his own experience writing for The Onion’s fake news operation: “A lot of people just didn’t get the premise of the paper, and pieces on The Onion had to spend a fair amount of time explaining what exactly The Onio?i was and how it operates. Now that’s just not the case.”

Still, a satirist can’t control how satire is received, and that’s what Cohen has found out with Borat, who has pulled in a contingent of fans who find him strangely admirable. These fans don’t agree with everything he says, but consider him an antidote to what they see as out-of-control cultural sensitivity. Bloomberg News columnist Matthew Lynn praised Cohen for challenging “the orthodoxy dictating that we can’t make fun of other nations,” while Rod Dreher, editor of the opinion page for the Dallas Morning News, wrote that he loves the way Borat “exposes people’s slavish desire to conform.” Just like Archie Bunker became a larger-than-life character who had appeal beyond a satire of racism, Borat—and Cartman, and Sarah Silverman, and Colbert—have caught on for reasons their creators might not have anticipated.

And so, like Archie before him, Borat will continue to be a character that different people enjoy for different reasons. And if people get tired of worrying about racism, they can always turn to worrying about his portrayal of the country he’s supposed to be from.

Or as the ADL’s press release put it, “It is unfortunate that Mr. Cohen chose to make jokes at the expense of Kazakhstan.”

At a Texas hunting resort, Borat suggests 'the big-nosed people' are troublemakers: 'It is a shame you cannot hunt the Jew’ 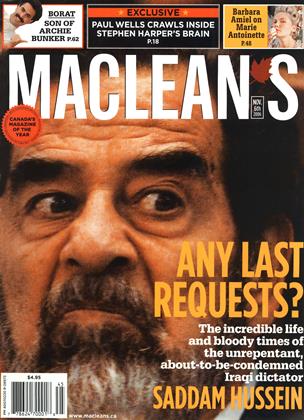