Considering that it seems to be every prominent Canadian’s preferred second nationality, from the Governor General and the new leader of the Opposition down, France is a faraway country of which we know little. One had assumed the French themselves were a wee bit more on top of things. Switch on the TV from time to time and you often stumble across footage of the mob overturning cars in Paris over some modest regulatory change M. Chirac’s hapless ministers have proposed. It would seem to indicate a more active engagement with politics than most Western citizenries are willing to muster.

Yet there’s one area in which the French people are strikingly uncurious: the conduct of the nation’s foreign policy. Considering how much of the country’s self-identity is invested in a sense of itself as a prestigious player in global affairs, it’s remarkable how in a democratic age the populace has been content to leave the management of those affairs to a narrow unrepresentative elite—the “Quai d’Orsay,” in journalese shorthand. One might use similar shorthand for the U.S. State Department or the British Foreign Office, but in neither case does it convey quite the same awesome monopoly on the conduct of foreign policy as wielded in Paris. The old Punch joke about the librarian who filed French constitutions under periodicals belies the eerie stability underneath the surface turbulence: Second Empires and Third Republics came and went, but it made little difference to a permanent, tightly drawn, hereditary foreign policy

David Pryce-Jones has now written a brisk, fascinating overview of two centuries’ worth of this clique’s influence. Betrayal: France, the Arabs, and the Jews is a slim volume which at first glance would appear to be the latest entry into the emerging niche market of literary francophobia summed up in the splendid title of Denis Boyles’s recent book: Vile France: Fear, Duplicity, Cowardice and Cheese. “Francewise, our understanding is a little thin,” begins Mr. Boyles in chapter one. He is, in fact, a great expert on France, but as a patriotic American feels obliged to warm up with a few professions of gleeful ignorance of the surrender monkeys and all their works. “Most of us are irritated by whatever it was they did to us at the United Nations before the war in Iraq, but most of us weren’t really paying attention.”

As it happens, I like French cheese, and even the “fear, duplicity, cowardice” has a more subtle piquancy than one might imagine. The Americans and the French were both murderously bombed by Hezbollah in Beirut a quarter-century ago, but it was Mitterrand’s France not Reagan’s America that at least went through the show of bombing back. Such muscular spasms aside, though, it’s hard to see what French policy has done for France. David Pryce-Jones’s book presents the Quai d’Orsay’s view of the Middle East not just as a pain in the neck for the Brits and Yanks,

but as an appalling tragedy for France that may yet cost them their country. Betrayal starts with the ongoing “intifada” (I’m pleased to see the French authorities have belatedly caught up with the designation I gave the current troubles in early 2002) on the streets of the country’s suburbs by, ahem, “youths.” The author notes the usual factors—an imam whose apartment has a chemical laboratory for the manufacture of ricin bombs, etc.— but then spools backwards across the centuries to build a case for France’s present predicament as a monument to the vanity and strategic stupidity of its diplomatic class. There is a lot of anti-Semitism on display— not the offhand anti-Semitism of your average languid English toff of similar vintage, but something more corrosive and obsessive. There is, in that sense, a direct line between those French emissaries in Russia and Germany blaming Bolshevism and Nazism on “Talmudic atavism,” and Daniel Bernard, M. Chirac’s ambassador to the Court of St. James’s, announcing airily at a London dinner party in 2001 that the problems of the world can be laid at the door of “that shitty little country” Israel. From “Talmudic atavism” to “shitty little country” may mark a deterioration in Gallic rhetorical élan but at least its prejudices remain inviolable.

If you had vaguely assumed that the now routine comparisons of Israelis to Nazis derived from an antipathy to Ariel Sharon or the post1967 transformation of the Zionist Entity from plucky embattled underdog to all-conquering military behemoth, it’s sobering to be reminded that the French were doing the Israelis-are-the-new-Nazis shtick within 10 minutes of the end of the Second World War. Jews, wrote the consul general René Neuville in a lengthy cable from Jerusalem in 1947, are “racist through and through... quite as much as their German persecutors.” The dispatches of Pierre Landy, French consul in Haifa, rely heavily on “the Israeli Gestapo” and similar formulations. In public, the political class was usually more circumspect, though not always. President de Gaulle famously raged at a press conference that the Jews were “an elite people, self-assured and domineering” with “a burning ambition for conquest.” In the ensuing controversy, M. le Président assured the Chief Rabbi that he’d meant it as a compliment.

Still, when it comes to Jews, many nations manage to have (to put it at its most discreet) blind spots without being quite so inept in their calculation of their own interests. When it became clear after the Great War that the British had got their hands on the Holy Land— Palestine—a Catholic paper, L’Oeuvre d’Orient, declared, “It is inadmissible that the ‘Country of Christ’ should become the prey

of Jewry and of Anglo-Saxon heresy.” The al-Qaeda chappies like to refer to the West as “the Crusader nations,” but in France the designation actually fits: a residual Crusader spirit lingered in the national psyche and led Paris to believe it was a guarantor of the Christian inheritance in the Levant. (Experts will point to the French architectural styles of Christian sites in the region.) Fair enough. These days, what’s left of the poor beleaguered Christian community in Palestine, Lebanon and the rest of the Middle East could certainly use a protector. But the French came to regard their role in the region as defenders of Christianity not against Islam but rather the depredations “of Jewry and of Anglo-Saxon heresy,” which meant that in practice whoever was most opposed to the British and Americans could usually rely on French co-operation, from sheltering the pro-Nazi Grand Mufti of Jerusalem to providing a global media platform to an obscure exiled ayatollah called Ruhollah Khomeini.

True, at the UN in 1947, the French voted for the creation of Israel while the British sat on their hands; in 1956, the French and Israelis were military allies while the Americans scuppered the whole adventure. But both events seem more like tactical accidents, and the effect of de Gaulle’s military embargo against Israel and France’s role in the undermining of the Shah was, in the first case, to make the U.S. indispensable to Israeli security and, in the second, to make Israel indispensable to American interests in the Middle East. In other words, decades of French paranoia about a largely invented “JudeoAnglo-Saxon” alliance helped make it a reality.

And what do the French have to show for it? For facilitating the overthrow of the AngloAmerican monarchy and the birth of the prototype Islamic republic in Iran, the Quai d’Orsay got in return the assassination of the French ambassador to Lebanon by Iranian agents in 1981, the murder of 58 French troops by Iranian terrorist proxies in 1983, the kidnapping of the French ambassador to Iran as a bargaining chip for the release of some valuable killers in 1984... But the Total oil company did get a few post-revolutionary contracts.

Since the time of Napoleon III, French diplomats have described the country as “une puissance musulmane”—a Muslim power. They meant it originally in the same sense that Queen Victoria was a Hindu empress. Instead, the more enthusiastically they took up the dictators and fanatics of the region, the more humiliations have been visited upon them. It couldn’t happen to a more deserving geopolitical poseur, of course. But, with the largest Muslim population in West-

ern Europe increasingly hostile to the French state and all its works, the Fifth Republic, concludes David Pryce-Jones, “is acquiring an internal reality as ’une puissance musulmane’ on lines quite different from anything envisaged by those who have fostered this intellectual illusion.” Painstakingly culled from decades of extraordinarily smug dispatches in the Quai’s archives, this book (at a time when the striped-pants set are back in the ascendancy in Washington) is a sobering lesson in the limitations of foreign policy “expertise.” Pryce-Jones’s title is especially well chosen: in the end, French policy has been a betrayal of France itself. M 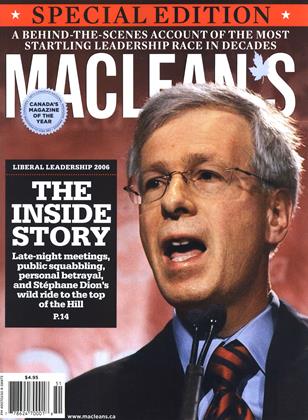