BY JOHN GEDDES • Before it fades into political lore, here’s a final moment worth savouring from the convention that made Stéphane Dion the new Liberal leader. The cheering is over. The big hall at Montreal’s Palais des Congrès is nearly empty. Among the stragglers in the hallway outside, Senator David Smith, 65, maestro of many winning Liberal campaigns, but this time a backer of Michael Ignatieff’s failed bid, slouches toward the escalator. He personifies dejection. A much younger man, his tie still neatly knotted, looking fresh enough to go a couple more ballots, catches Smith’s eye. It’s MP Mark Holland, 32, a key organizer for Gerard Kennedy, whose kingmaking throw of support to Dion was the convention’s decisive moment. Holding out his hand, Holland offers a respectful, “Nice job, Senator.” But of course it was Holland who got the job done this time.

Is this where the torch is passed, out among the burst balloons and trampled banners while the chairs are being stacked? There they are—two hard-core political animals, one who campaigned for Lester B. Pearson in ’63, the other born in ’74, the year Pierre Trudeau regained his majority. If attention before the convention was lavished on Grit establishment figures like Smith, the focus has now shifted to an emerging generation— notably Holland and the other ascendant MPs and Internet-sawy strategists who surrounded Dion and Kennedy. Not only did Holland play a pivotal convention role during that first weekend in December, he returned to Ottawa and, hardly pausing to draw breath, took the lead in the Liberal attacks that forced Giuliano Zaccardelli to resign as RCMP commissioner.

If few Canadians had heard of Holland before, a lot more recognize him now. He featured prominently in TV convention coverage, and clips of him sparring first with Zaccardelli and then with Public Safety Minister Stockwell Day over the Maher Arar affair established him as the Liberals’ most pugnacious performer these days. He works at it. For four days during the convention, he functioned on no more than three hours’ sleep a night; and then for four more days back on Parliament Hill he caught, at best, six hours a night during the Zaccardelli uproar. “I’m running on pure adrenalin now,” he said in an interview late last week. “At one point in the convention, I hadn’t eaten in over 36 hours. I was fasting and didn’t realize it.”

How did it all feel? “It was the greatest experience of my professional life.”

Holland isn’t one of those politicians who claims he’s not really a politician. He’s steeped in it, always wanted to do it, and is now living his childhood dream. “I started reading Maclean’s when I was in Grade 4 and decided I wanted to be a member of Parliament,” he says. At 12, he volunteered to work for a candidate in an Ontario provincial election. His mother would drop him off at the campaign office after school. Growing up in Pickering, Ont., a suburb east of Toronto, politics remained his passion through his high school years. He inherited his mother’s communitymindedness, though she was not a partisan; his father was a lawyer who brought a courtroom-honed debating style home and taught his son to argue. Holland’s parents divorced when he was in his early teens, a painful formative experience that drew him closer to his only sister, Sommer, who has worked on his campaigns. “We learned a lot about ourselves and relationships in the process,” he reflects. “I am who I am because of that, and because my parents were, at the end of the day, very supportive on the other side of it.”

Heading off to university, Holland was not cut out to be a typical student. In second year, while studying political science and history at the University of Toronto, he ran for school board trustee in Pickering. He lost. “I was crushed, devastated, humiliated, was never going to run again,” he recalls, laughing. “But I only lost by 200 votes.” Not a wide enough margin to snuff out such burning ambition. While still at U of T, his girlfriend, Aerlyn O’Keefe, had their first child. (They are now married and went on to have two more children, now in school.) It was hardly the care-

free undergraduate life. “I was working parttime in an MP’s office, going to school, and working with my wife to raise our son,” he says.

At age 23, he won his first election as a Pickering municipal councillor. “I have a young face, and I had a lot younger face then, and when you come up to a door and somebody thinks you are going to sell them chocolates, that’s not the best way to start a conversation,” he says. “But I would win them over. I decided to live on the streets and campaign my heart out—every spare second, I knocked on doors.” Bill McLean, one of the candidates he beat for that first council seat, recalls being shocked at how the kid outhustled him. “It was demoralizing to go door-to-door, and find he’d always been there first,” says McLean, 56, now a regional councillor in Pickering. They later became friends and political allies, and McLean goes as far as to tout Holland as a possible future prime minister.

But that’s getting ahead of the game. For now, Holland is solidifying his reputation as a hard-hitting MP, with a sideline in campaign organization. He was first linked to Kennedy

when he supported his bid to become Ontario Liberal leader in 1996. Kennedy was the frontrunner, but lost to Dalton McGuinty in a tumultuous convention. “I felt a tremendous wrong had happened,” Holland remembers. He admits that he displayed “the kind of zealousness that scares some people.” He looked no less fervent this year backing Kennedy’s assault on the federal party leadership, crying when Kennedy dropped out after two ballots, even though the possibility of taking his delegates to Dion was contemplated long in advance.

“party renewal,” defined as a new sense that rank-and-file Liberals must have more direct say, and that the party must welcome new blood. Most veteran Liberal insiders coalesced around the losing bids of Michael Ignatieff and Bob Rae. “There’s a new group of individuals coming in,” Holland says, “and we’re going to play a great role in the party, but that’s tempered with incredible experience.”

First elected MP for the Ajax-Pickering riding in 2004, Holland has a forceful style that makes it easy to forget he’s still new to the job. His bruising questions when Zaccardelli testified twice before the House public safety committee contributed directly to the RCMP commissioner’s resignation, over inconsistencies about when he knew that false information from the Mounties might have influenced the U.S. decision to ship Arar to prison in Syria. On Sept. 28, Zaccardelli suggested he knew the RCMP had mislabelled Arar an extremist back in 2002; but on Dec. 5, he said he found out only earlier this year. “I’m wondering,” Holland asked him, “on which day did you perjure yourself before this committee?” Zaccardelli’s response—“I gave the best answers to the best knowledge that I had at the time”—sounded limp, given he was speaking about knowledge CONVENTION of his own memory.

‘AT ONE POINT IN THE CONVENTION I HADN’T EATEN IN 36 HOURS. I WAS FASTING AND DIDN’T REALIZE IT.’

When Day, the minister responsible, appeared later before the same committee, Holland grilled him over reports that he had privately pressed for Zaccardelli to be forced out earlier. His implication: Day had realized for weeks that Zaccardelli’s position was untenable, but Prime Minister Stephen Harper let the situation fester. “Did you push the Prime Minister for the commissioner to be released or fired?” Holland demanded. “Yes or no?” Day dodged by deriding Holland as a grandstanding “caped crusader,” whose “persona changes quite radically” when he’s on camera. As Day left no doubt the clash was personal, Holland kept up a drumbeat of “Yes or no?” and ended the exchange by declaring: “I will not, absolutely not, throw softball questions to please you on this matter.”

As an image-defining moment, it wasn’t bad, but not perfect. Politicians climb only so far on reputations as scrappers—and Holland sees the need for a more balanced persona. He says that while he’s mad about the injustice done to Arar, “nobody who knows me personally would describe me as angry.” Indeed, his preoccupations are not noticeably hot-button or obviously partisan. He’s a vegetarian who is pushing a private member’s bill to modernize the cruelty to animals law. He sees the environment as the biggest issue of the times.

So far, though, he’s defined not by policy aims, but by political skills. Those he has offered up without conditions to his new leader. “The only thing I said to Stéphane that I want, my only ask,” he says, “is that I be used in the way that he finds most helpful.” That Holland can be supremely helpful, from the convention floor to the committee room, is no longer in doubt. But for a politician who, in the space of a few short days, played such memorable roles in Dion’s rise and Zaccardelli’s fall, just helping out surely won’t be enough for long. M 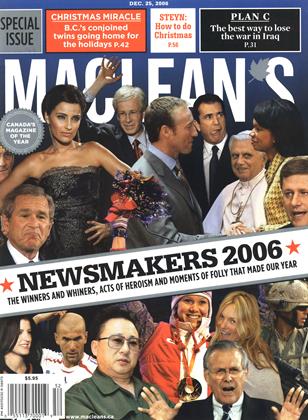