Paul Szabo admits to drinking three or four cups of coffee a day. Staffers at his Toronto-area riding put the number higher. Much higher. “He should buy stock in Tim Hortons,” says Irene Corridore, who’s worked for the Liberal—Canada’s hardest-working MP, according to his colleagues—for most of his 13 years on the Hill.

There’s a Tim’s across the street from his Mississauga South office—a persistent invitation he finds hard to resist. He drinks his coffee black, and downs 10 to 12 a day.

How else to fuel his relentless drive? Szabo, 58, has launched some 40 private member’s bills and motions and, as a backbencher in Paul Martin’s 14-month government, uttered a staggering 154,683 words in the House—more than any other MP. He has spent Christmas vacations writing books on fetal alcohol syndrome, and wedding anniversaries at international conferences. He has filibustered a bill he believed could permit human cloning, and staged delicate backbench revolts against same-sex marriage. “He doesn’t have to be the pitcher—he’s prepared to play second base,” says Liberal MP Derek Lee. Szabo prefers more earthy metaphors: “I like to grind out sausages,” he says, of his work.

In Ottawa, the former chartered accountant kips a block from the Hill. “I walk back to my little hotel room and there’s a bed and a bathroom and that’s good,” he says. He rises at 5 or 6 a.m. and doesn’t return until after Lloyd Robertson’s nightly spiel. Some days— when preparing to bombard a bill with amendments, say, as he did with his own party’s reproductive technologies legislation some years ago (he looks askance at stem cell research)—Szabo will stay in his office into the wee hours. “The man works when he’s sleeping,” says his 24year-old daughter, Whitney, whose mother tells of 2 a.m. jottings in a notebook by his bed.

Twice Szabo has watched a bill he’s introduced seeking warning labels on alcohol come within a hair of passing; its latest iteration, he says, will likely die with this government. And yet, though such manoeuvres be thankless, he continues— grinding out sausages. 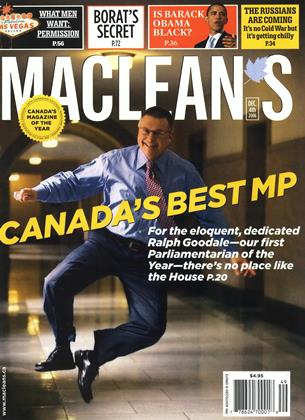