BY KAREN ZAGOR • Right now, faculties of education across the country are dealing with the onslaught of applications from thousands of would-be teachers. At the Ontario Institute for Studies in Education (OISE), they’re sifting through roughly 6,000 applications that arrived before Dec. 1 for the 1,200 spots in OISE’s Bachelor of Education program. At the universities of Alberta and British Columbia, applications are piling up ahead of the March deadline. But think of a generic image of a teacher. Chances are you’ll come up with someone like John Keating (Robin Williams in Dead Poets Society) or Jean Brodie (Maggie Smith in The Prime of MissJean Brodie), who for better or worse dedicated their lives to teaching. That’s changing. If this year follows the pattern of recent years, each faculty of education will be evaluating a large number of applicants who have already had successful careers in other fields.

At the University of Toronto’s OISE, the country’s biggest teacher factory, the average age has been slowly moving toward 30. In 2004-05, it was 29.2, compared with 27.2 in 1999-2000. And even OISE’s younger students are likely to have spent a few years in the workforce before heading into teacher training. “We get lawyers, engineers, pharmacists, vets and dentists,” says Ian MacLeod, assistant registrar responsible for initial teacher education admissions at OISE. “About the only people we don’t get are doctors.”

The pattern is similar at UBC’s faculty of education, where Gary Rupert, program coordinator of the teacher education program, routinely sees applicants from engineering and business, and has noticed a recent rise in applicants from the film industry. The University of Alberta, meanwhile, has lawyers, police officers, tradespeople, accountants, nurses and dental hygienists in its after-degree teacher education program, where the average age is

24 for full-time students, and 34 for part-time. “Although we are not seeing a change in the average age at enrolment, it seems to me that we’re looking at a collective shift of values in society,” says Fern Snart, dean of education at the University of Alberta. “People over the past two decades have tended to lean toward choices of careers that were economically driven. With a world less secure, human values are starting to drive people. People have a real sense of the collective. If they have developed gifts and talents in their first careers or through life experiences, this is a way they give back.” She could be talking about Rod Taylor, 52, a retired executive from one of Canada’s utilities who is training at OISE to be a high school English teacher. “I decided I wanted something completely different from the leather chair in. the corner office,” he says. “The economics aren’t driving me. It’s just when I try to think of how I can best contribute, it’s teaching senior high school kids how to read Shakespeare well enough to get into university.” For those coming from the film industry, often the glitz and glitter have worn thin. “I enjoy working in film,” says Simon Buck, 37,

a grip who is training to be an elementary school teacher. “The money is good, there are fun people and it is incredibly varied.” But it’s also erratic work, with relentlessly long days and months of unemployment. Buck started working as an unqualified emergency substitute teacher during lulls and grew to love going to elementary schools. “It could get crazy, but I always came home with a smile,” he says.

In large urban centres, a number of second-career teachers are immigrants who were qualified professionals but don’t have the time or money to spend years requalifying in Canada. Teaching becomes an obvious choice, since accreditation can take as little as one year. At St. Francis Xavier University in Antigonish, N.S., a significant number of aspiring teachers are from the Mi’kmaq community. And then there are others like Donna Mattie,

39, finishing her bachelor of education at St. FX. She left school at 17 to have her first child, and has collected her university qualifications while raising three children. “We all have such different circumstances for leaving high school. Mine weren’t unusual, and it still happens,” she says. “Life experience gives

At OISE, the average age of those studying to be teachers is now almost 30

you credibility with the kids. I would like to be a mentor, to let them know why education is important.”

How do these older students finally fare in the classroom? OISE’s MacLeod says most do well. “By the time anyone gets into this program, they’ve demonstrated a fair amount of preparation,” he says. Older new teachers have the benefit of maturity, self-confidence and life experience, which can help them master the essential skill of managing a classroom. Still, older males have a somewhat higher incidence of failure, says UBC’s Rupert, perhaps because they are leaving a man’s world and entering one that is predominantly female, and younger. “This kind of learning is developmental and collaborative, which is very different from the work experience of many older men,” he says. “Having said that, we do get mature men who do very, very well.” M 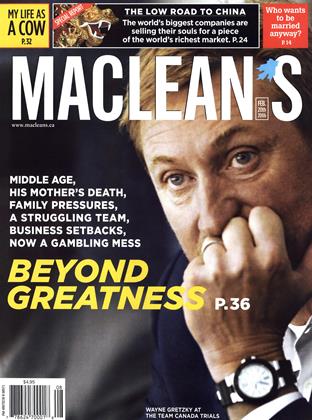