From tiny tots gymnastics to cheerleading competitions, she always felt like she could fly

Shauna Ann Stuewe was born on Oct. 12,1991, weighing seven pounds, 13 ounces. She grew up in Yorba Linda, Calif., the birthplace of Richard Nixon, about 16 km from Disneyland. Her parents work at an aerospace company, Kirk as a business manager, Lori in accounting. Ten-year-old sister Melanie looks just like her. They were “inseparable,” says their father. Her family called her “Cookie.”

Baby Shauna had “big, fat spongy cheeks we could squeeze,” remembers Lori. As she grew, so did her energy, and Shauna’s parents enrolled her in tiny tots gymnastics to learn balance, agility and confidence. “She just blossomed,” Kirk muses. Tumbling became her strength, and she won countless competitions. Outside, Shauna practised flips on a backyard trampoline, and inside she played “airplane” with Melanie. “I would stand on her hands and hold her feet, and then she would lift [me] into the air,” her sister explains.

Besides gymnastics, Shauna rode her dirt bike, skateboarded and swam. She loved the rain, knitting, and fishing with her uncles. Though Shauna was too young to have a driver’s licence, she cruised her grandparents’ farm car through their cornfields in Wisconsin. During a family vacation, Shauna set a record at the resort for hula hooping for one hour and 43 minutes. Her favourite movies included Napoleon Dynamite and The Ringer, and she was known for impersonations among her friends, Amber, Julia and Cammie, who called her “Shauna Wanna.”

Shauna attended Friends Christian private school from third to eighth grade. Her classmates were a tight spiritual group. They hoped to move on to a new Friends Christian high school, but construction wasn’t finished by last September. Instead, Shauna and her gang started at Esperanza public high school. “It was a big shock: the social cliques, swearing and smoking,” says Kirk. So Shauna set up a weekly Bible study with her friends.

What Shauna loved about Esperanza was its high-level cheerleading squad. After several injuries, she gave up gymnastics and joined a competitive cheer team. “It was her new-found love,” says Kirk. Last autumn, Shauna made the Esperanza junior varsity cheer squad—one of the few freshmen to ever make the team. After her first stunt (an aerial twirl), Shauna squealed, “I feel like I am so high, I feel like I’m flying, like a bird,” a friend later wrote online.

Shauna’s favourite part of cheerleading was competing against

other squads. Esperanza was always a favourite to take first place. At a recent tournament, college cheerleaders performed, and Shauna was mesmerized. “She would have liked to do cheer for as long as she could,” says Kirk. Shauna also wanted to go to college to study marketing and design. She was on the yearbook team, and hoped to work in magazines (she liked Teen People and Seventeen). Shauna had already researched schools—and cheer squads, mosdy in California. “The one college that I kept saying ‘no’ to was in Hawaii,” remembers Lori.

If her parents were keen to keep her close to home, there was reason. In 2004, while away at Christian summer camp, Shauna backflipped into the pool during a playful diving competition. She resurfaced—but then sank. Her heart had stopped. Lifeguards resuscitated her, and she was hospitalized overnight. But months of tests showed nothing wrong, and Shauna returned to athletics.

Lately, Lori and Shauna were becoming “more like friends than mother-daughter,” says Lori. They shopped together (with Shauna advising how to dress cooler), and had cheer-offs (with Lori showcasing her high school routines). Shauna’s parents were most impressed with how her relationship with God was evolving. “She taught us more about faith than we ever taught her,” Kirk says. In her Bible group, Shauna started a daily prayer journal. It read like secret notes passed between friends: “Hey Buddy, how’s it going today?” and “Hope Valentine’s Day went well up there too. Love you. Amen.”

The day after Valentine’s Day, Shauna was at cheer practice. The girls threw her up for a typical stunt, which she aced. But she felt faint, so they checked her pulse. Shauna lost consciousness; within minutes, a defibrillator was on-site, then Lori and the paramedics. She was sped to the hospital, where doctors tried to get her heart pumping while Lori and Kirk waited with a pastor.

On Feb. 15,2006, Shauna Ann Stuewe, 14, died at Kaiser Permanente Hospital. The cause of death is still being determined, but, Kirk believes, “It’s God’s work.” More than 12,000 people attended the funeral at Friends Church. Many wore teal, Shauna’s favourite colour, which matched the casket in which she lay, wearing her latest pair of jeans, surrounded by pictures and mementoes.

At Esperanza High School, a banner flaps: “Our Li’l Cheerleader 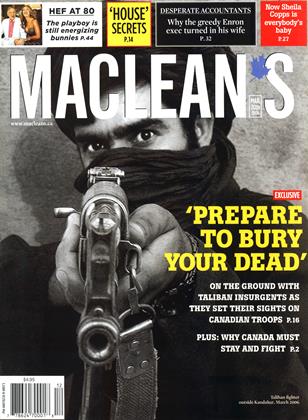