There were two extraordinary aspects to Stephen Harper’s Afghan trip. The first extraordinary aspect was that it should seem so extraordinary. After all, Bush and Blair and John Howard visit their troops in the field, and it’s a brisk five-minute item on their respective evening news shows. The fact that our Prime Minister’s flying visit seemed to say as much about Canada as Afghanistan was what gave it significance.

The second extraordinary aspect was the absence in Mr. Harper’s remarks of any reference to the usual pieties: peacekeeping, multilateralism, NGOs. There was one token reference to the UN. But, other than that, the Prime Minister framed the Afghan mission in Canadian terms, as a projection of Canadian power (if you’ll forgive the expression) in Canada’s national interest. Apparently, we still have one.

That’s a very different tone from late-period Trudeaupian blather: M. Chrétien, you’ll recall, liked to say that “Canada is a good citizen of the world.” Paul Martin, chuntering through the boilerplate one mo’ time to introduce our new Governor General, declared in ringingly hollow tones: “Look into the face of Canada and you will see the world.”

Our new Prime Minister seems to be inviting us to look into the face of Canada and see Canada. Which makes a pleasant change. Under the Liberals, Canada was the quintessential post-nationalist nation, and, indeed, so aggressively so that our post-nationalism became more jingoistic than conventional nationalism: “The world needs more Canada,” etc. We were too busy promoting ourselves as the great peacekeeping nation to actually do any. We’re currently at No. 32 on the hit parade of UN peacekeeping deployments, below not just the Great Satan (31) but also Benin (30), which I, with

my typical dead-white-male Eurocentric arrogance, had assumed was the kind of AfroMarxist basket case to which you deploy UN peacekeepers. Well, good for Benin for shouldering its share of the globocop burden. And, unlike Canada, it doesn’t brag about it on five-dollar bills and in beer commercials.

In one of his final appearances on the world stage, Paul Martin talked tough to the UN— “Make no mistake,” he thundered. “The UN needs reform”—and then proposed the re-

form he had in mind: a “G20” of leading nations, the Newest Established Permanent Floating Crap Game on the geopolitical circuit. Same great multilateral inertia, brand new secretariat. You can see what’s in it for Mr. Martin: the transnational talking-shops are the equivalent of those all-star charity fundraisers that spend so much chauffeuring the stars to the stadium there are no funds left for the charity. But what’s in it for, say, the villagers of Darfur is harder to discern. As my favourite foreign minister, Australia’s Alexander Downer, said not too long ago, “Increasingly, multilateralism is a synonym for an ineffective and unfocused policy involving internationalism of the lowest common denominator.” Transnationalism allows

poseur states to pass off their weakness and enervation as moral virtue: in the British philosopher Roger Scruton’s words, it’s “a way of painting their inability to act as an exalted refusal to act.” And, as we’ve seen from Saddam, the ayatollahs and the Sudanese, the thug states understand the system for what it is and can happily game it for years on end.

In Redefining Sovereignty, Orrin C. Judd brings together a splendid collection of essays on the tension between national sovereignty and the new transnational entities. Full disclosure: there’s an approving quote from me on the front of the book, but other than that I have no stake in its success or failure; don’t know Mr. Judd, nor most of his stellar contributors, from Václav Havel and Jesse Helms to Francis Fukuyama and Kofi Annan. The token Canadian is a good choice: David Warren, represented by a fine essay yoking Bush’s approach to Islamism with Lincoln’s to the Civil War—liberating the Middle East is not the point of the exercise, any more than liberating the slaves was. But in both cases it was necessary to fulfill the strategic objectives of saving the Union a century and a half ago, and of saving the nation-state system today. As another contributor, Lee Harris, puts it, “The liberal world system has collapsed internally.” He means that there are no longer, in Kant’s phrase, “maxims of prudence.” That’s to say, we don’t know the limits of behaviour. When Iranian President Mahmoud Ahmadinejad threatens to wipe Israel off the face of the map,

FINALLY A BOOK ABOUT... ALI AND COSELL

There never was a more symbiotic pair in sports, perhaps in all (of U.S. pop culture. According to Sound and Fury (Simon and Schuster) by Dave Kindred, talker Howard Cosell and fighter Muhammad AM merged their huge talents to force sports into the forefront. “Cosell loved AM, the rebel with a belief,” writes Kindred, who knew them both, “and AM loved Cosell, the cranky old white guy brave enough to stand with him.”

we cannot reliably assure ourselves (though many foolish experts do) that this is just a bit of rhetorical red meat, a little playing to the gallery for the Saturday-night jihad crowd.

The transnational gabfests aren’t much use in this new world. The Kyoto treaty is, in that sense, the quintessential expression of the higher multilateralism: the point of Kyoto is not to do anything about “climate change,” but to give the impression of doing something about it, at great expense. If climate change is a pressing issue and if the global economy is responsible—two pretty big “ils”—then Kyoto

expends enormous (diplomatic) energy and (fiscal) resources doing nothing about it: even if those who signed on to it actually complied with it instead of just pretending to, all that would happen is that by 2050 the treaty would have reduced global warming by 0.07 degrees—an amount that’s statistically undetectable within annual climate variation.

That’s fine for “climate change,” which, insofar as there is an imminent threat, is a good half-millennium away. As Kofi Annan, the bespoke embodiment of transnationalism’s polite fictions, says, “There is no substitute for the unique legitimacy provided by the United Nations.” Which is swell if your priority is “legitimacy.” That and a dime’ll get you a cup of coffee—unless the tsunami hits and sweeps the lunch counter out to sea. Yet these days, even with natural disasters, o the international order divides—like Bage-

bot’s view of the British constitution—into its “dignified” and “efficient” halves. The efficient humanitarians—the Pentagon and the Royal Australian Navy—have boots on the ground in Indonesia and Sri Lanka within hours, rescuing people, feeding them, housing them. The dignified humanitarians— the UN’s 24/7 permanent humanitarian bureaucracy—are back in New York holding press conferences to announce they’ll be sending a top-level situation-assessment team to the general vicinity to conduct a situation assessment of the situation just as soon as the USAF emergency team has flown in and restored room service to the five-star hotel.

Kofi Annan referred to the UN’s “unique legitimacy,” and he’s right about the “unique” part. The transnational system, in insisting that the foreign minister of Syria is no different from the foreign minister of Denmark, confers a wholly unmerited legitimacy on the planet’s gangster states. In Redefining Sovereignty, Roger Scruton wonders of Saddam “how it is that a petty tyrant could have defied the world for so long.” But, if “the world” is represented by the UN’s “unique legitimacy,” you don’t have to defy it, you just have to strike a deal—in this case, the Oil-forFood program, that Hydra-headed racket under which, among other fascinating codicils and appendices, a million greenbacks from Saddam got funnelled via his Korean chum Tongsun Park into a Canadian petroleum company run by the son of the quintessential transnational Canadian Maurice StrongMister Kyoto himself.

Based on current trends, by mid-century, America, India and China will each be producing roughly 25 per cent of world GDP, with Europe down to 10 per cent. As the columnist John O’Sullivan points out, the three global powerhouses are all strongly attached to traditional notions of national sovereignty, so Europeans and others who’ve bet on transnationalism have the next 10 years to cement its existing institutions and expand its reach. A worldwide eco-tax? Global gun control? Meanwhile, back in the real world, from ter-

rorism to tsunamis, effective multilateralism is now the province of “coalitions of the willing.” I’d like to think the Prime Minister’s trip to Afghanistan was a first step toward the side of real global leadership. M 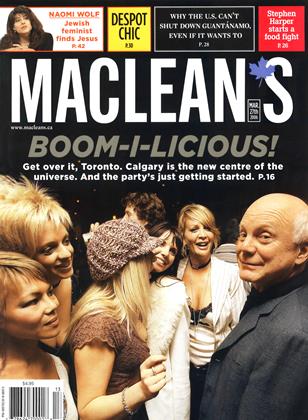