The Prairie city stands in for Kandahar for a military exercise

Later this month, about 600 Canadian troops will parachute into Winnipeg, transforming Manitoba’s capital into a war zone. But the locals needn’t worry about coming under friendly fire during Exercise Charging Bison. That’s because the soldiers, who may be backed by armoured vehicles and military helicopters, won’t be packing real heat—live-ammo rifles will be replaced by laser tag-like weapons—during this weeklong war game.

Winnipeg was picked to host the event because it provides a highly populated urban setting for the Canadian Forces to simulate the types of operations they have to face in Afghanistan. “Soldiers in battle don’t just go over a hill anymore,” says Col. Kelly Woiden, the commander of 38 Brigade and organizer of this event. “Often they find themselves in three-block wars: peace-support operations in one block, humanitarian relief on the next, and full-combat operations on the third. A soldier has to be able to differentiate immediately between friend and foe.”

There will be two camps—one just north of City Hall and the other in St. Boniface—and a high-intensity training area located just outside the downtown core. Everything will remain in full operation—day and night— from April 30 to May 6. And while many tasks will take place in cordoned-off areas, some will require troops to work among civilians—further complicating missions.

Most of the soldiers taking part will come from 38 Brigade—units of reservists from Saskatchewan, Manitoba and northern Ontario—which has been pegged to take part in an overseas task force in 2008. Some of the insurgents and humanitarian relief workers will be played by civilians. “Soldiers will be on a relief task and suddenly be engaged by a sniper or a vehicle-borne explosive,” says Woiden. “They will have no idea it’s coming. They’ll just know there is always a threat.”

Not surprisingly, Charging Bison has raised concerns in the community. Local merchants, worried what a large-scale laser-tag game might do to business, have protested this “occupation.” But Woiden promises the exercise will be less intrusive than regular spring construction. His troops will just be wearing helmets, instead of hard hats. M 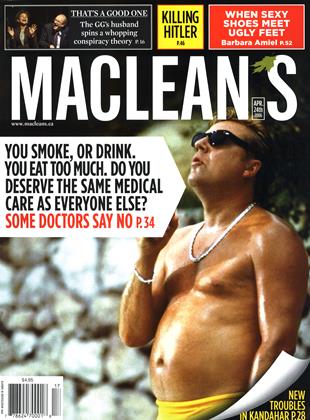