MEDICARE IS OUR BIRTHRIGHT

I could hardly believe my eyes! Twenty pages on the private medical care industry that is challenging the very foundations of this country’s most cherished and hard-earned social program, medicare (“Complete user’s guide to private medical care in Canada,” May l). There are many Canadians who can remember life before medicare, when only the privileged few could afford to be treated while others went without, or spent the rest of their lives paying off medical bills. In

response to these experiences, we as a nation made the bold decision to care for one another through the creation of a universally accessible, single-payer system. We chose the cost-effective method of taxes, based on income, to pay for it. To be sure, medicare needs to be strengthened and improved, and progress is being made in many parts of the country. One example is a recent Alberta experimental project that streamlined orthopaedic surgeries, reducing wait times from 47 to 4.7 weeks. In your editorial (“Private medical care is here to stay”) you say, “We want to see [public health care] strengthened and improved.” I look forward to another special edition providing coverage of what is available to all Canadians as a result of our will to care for one another. Medicare is our birthright.

Your guide to private medical care provided a good top-down view of trends and the frustrations driving them. These are symptoms

of a deeper problem in health care across North America. It is not an issue of public vs. private delivery. The systems in Canada and the U.S. are unsustainable: we will continue to pay more for eroding access and diminishing quality because we don’t have health care, we have disease care. It is deeply entrenched in medical education, in delivery systems, in financial arrangements and in our own conditioning to wait until we’re ill before we take action. There is hope. We are seeing signs of a new model emerging,

one oriented to health management rather than disease treatment, and incorporating prevention and disease risk reduction. It has no silos; it is multidisciplinary, integrating complementary health sciences and based on the latest in medical diagnostics. The hurdles are significant. We need a new focus on the whole person and we need a new paradigm of responsibility. Government can provide the incentives. We as individuals have to take responsibility. Employers, too, can play a role. Health management takes an investment of time and effort; it’s like staying physically fit. We need to break the pattern of instant (expensive) drug-based relief and work on mitigating the causes.

I was disappointed in your article for two reasons: it amounted to a simplistic rehash of a CBC documentary called Medicare Shmedicare, which aired on TV a couple of months ago, and it essentially provided free

advertising for a whole host of private players without mentioning the large number of public players who are giving the same services efficiently and without charge. We have worked hard at my hospital, and, as a result, our waiting list for hip resurfacing and replacement is less than two months. We have people coming from all over to have their hips resurfaced, free.

I must tell you that never in my 75-plus years has there been a time when Maclean’s wasn’t a part of my life. I congratulate you on the new format and I look forward to the magazine’s arrival each week. But I found a disturbing item: your “Bad news” piece on Maureen McTeer (“Funny girl,” 7 Days, May l). You suggest that as a panellist on CBC Radio’s Canada Reads, she was not a reliable arbiter of humour because she didn’t find Mordecai Richler’s novel Cocksure funny and knocked it out of contention. Humour is a very subjective thing. Your suggestion that McTeer ought to know what is funny because she married Joe Clark is not humorous, it is just unkind.

Thanks to Scott Feschuk for doing such a great job of covering what has long been a source of frustration for me, the nightmare of modern packaging (“Out! Out! Damned Barbie doll!” Comment, April 24). Having grown up in a time when my father and I could buy however many screws we needed and take them home in a little paper bag, I am constantly frustrated and puzzled by hard plastic wrappings that now challenge me every time I shop. Even food is an issue. Have you ever tried to “free” a Black Forest cake without rendering it unacceptable for company? And as for the screws, why do I have to buy 20 (and a box of Band-Aids) when I only needed five? This column was the best laugh he has given me yet!

I just got finished reading the open letter to Suri Cruise written by Scott Feschuk (“Daddy loves you like crazy,” Comment, May l). Absolutely brilliant! I laughed so hard, I

wiped away tears. Feschuk makes me proud to be Canadian.

I read your story on the man who died at the bingo hall with a sense of puzzlement (The end, April 24). Yousif Youkhana had expensive heart bypass surgery (an operation, I presume, that was paid for by the Canadian medical system). He had 50 jobs, some lasting no longer than a week. What was he contributing to the economy of the country? His children sponsored him, yet he ended up on welfare—also paid for by the taxpayer. The article left me shaking my head in disbelief. What was there about this man that deserved our attention?

Of all the dangerous and corrupt places Youkhana manoeuvred through, I feel ashamed that he met such an unjust fate here in Canada. This man deserved to live a life of peace and prosperity. The sad fact is that everywhere in the world, life can be so unfair. As one who has all he needs, I offer my sympathy to the family.

PADDED AND PUSHED UP

I am a sales consultant at a La Senza store and I wish to inform you of some erroneous comparisons made between La Senza’s ITEC bra and the IPEX bra made by Victoria’s Secret (“Victoria’s other secret,” Business, April 17). In your story you implied that La Senza’s ITEC was, like the IPEX, a wireless bra with minimal padding; in fact, the ITEC has underwire and is a fully padded push-up bra. Additionally, the ITEC is moulded all in one piece, whereas the IPEX is cut in several pieces and sewn together, like a normal bra. As you can imagine, the two are quite different. Sarah Beere, West Vancouver, B.C.

‘Amiel is definitely barking to herself when she writes about the outlawing of docking dogs’ tails in England. Positive social change is a beacon of hope for the natural world.’

content industry propelled by image consultants and lobbyists (“French fries and sneakers: pure evil,” Business, May l). However, as an avid ultimate Frisbee player, I would like to say that we are not a bunch of “hipsters, who fill out surveys on corporate ethics.” I have never filled out one of those surveys in my life, nor do I plan on doing so. And I do not feel we should have been a in his article.

My company, the Fraser Consultancy, publishes the Ethical Reputation Index. I’d like to explain that our report is not designed

to criticize or condone any particular company’s policy. We are a research and strategy company and, as such, we measure only what consumers think about companies and how consumers perceive corporate ethics. This may, or may not, reflect the companies’ behaviour, and therein lies our interest. In fact, your article illustrates this point very well. If companies such as Nike, which, as you say, is widely acknowledged as one of the best companies in North America for ensuring that labour standards are met at its Asian suppliers, weren’t rated highly by consumers in our study, then perhaps Nike’s corporate values could be communicated better? We are neither anti-business nor anti-corporate. Our intention is to help companies convey their corporate respon-

sibility commitment, practices and values as well as they possibly can.

POST-MORTEM FOR THE LEAFS

As a professor of sports and competition law, I commend Jonathon Gatehouse on his article detailing what a “cash box” the Air Canada Centre and the Toronto Maple Leafs are for Maple Leafs Sports and Entertainment Ltd. (“The puck stops here,” Sports, April 17). Despite rolling in money, Gatehouse concludes, probably correctly, that “this hockey club isn’t likely to get better any

time soon,” and, more insightfully, that this is primarily due to a variety of unreasonable restraints on competition agreed to by NHL owners. Leafs’ fans would gladly reward management for sound player personnel decisions that would improve the team, but management is not permitted to make them because of the US$42-million salary cap. Nor is an across-the-board salary cap remotely necessary to promote competitive balance in the NHL. Obviously, competitive balance would be improved, not harmed, if strongmarket teams like the Leafs, the Boston Bruins, Chicago Blackhawks, and St. Louis Blues were permitted to exceed the salary cap. A tailored scheme that, like the amateur draft, restricted teams that are both highpayroll and high-wins in the name of com-

petitive balance, is a better one for fans, and one that they should demand in the next collective bargaining agreement.

My favourite moment in the recently completed NHL regular season had to be Martin St. Louis’s overtime goal that effectively sent the Maple Leafs to the golf course. For the stumbling Buds, the puck stopped there. Gatehouse hit the problem squarely on the head. For today’s game, the Leafs were far too old, too slow and uninspired. The fact that it will probably take them years to rebuild is also music to my ears. Ironic too that he quoted Darcy Tucker saying to a reporter, “none of the guys like you.” This from the most hated, wimpy, cheap-shot artist in the game today.

In our steadily evolving world, as she says, Barbara Amiel is definitely barking to herself when she writes about the outlawing of docking dogs’ tails in England (“Those Brits are barking mad,” Opinion, May 8). Positive social change is a beacon of hope for humankind and the natural world, and we can be grateful to those individuals and organizations who have paved the way for each new milestone. Through the foresight of such people, the abolishment of slavery and emancipation of women were achieved. Society’s collective conscience has also demanded improvements in the way we treat the most innocent beings amongst us, including children and animals. What quirk of the human mind makes us think that we can improve upon what nature has designed? Arrogant, self-serving and omnipotent attitudes loom as obstacles along the road of social progress, yet the winds of change can be relied upon to fan us forward.

When man invades an animal’s territory with the intention of killing, it is called hunting or sport. When man is in the middle of the jungle and is terrorized by chimpanzees defending their family unit and their territory, it is called “murder” (“ ‘Rampage’ in the rainforest,” Nature, May 8). How typically Canadian. 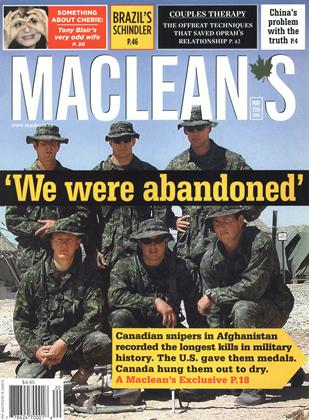