When callers reach the voice mail of Toronto dermatologist John Goldhar, they are politely informed that “the doctor no longer sees patients for ulcers, bleeding tissue diseases, connective tissue diseases or psoriasis.” Goldhar, whose practice is 80 per cent devoted to cosmetic procedures, makes no apologies for banishing patients with the afflictions. “They’re all very time consuming,” he says. “It’s a matter of compensation.”

He is not alone. Five years ago, Kevin Smith, a dermatologist in Niagara Falls, Ont., began disbanding his medical practice, refusing new referrals and telling patients to try another doctor or travel to Buffalo, where they have to pay out of pocket for their care. (Niagara Falls’s only other dermatologist had already limited his practice to skin cancer.) Since he started practising in 1988, the climate for medical dermatology has gotten worse and worse, Smith says, pointing to rising expenses because of new technologies and fees that have remained static or even declined in real terms. “My take-home pay was $6,” he says, referring to one follow-up consultation with a psoriasis sufferer. “I finally said, ‘I’m not doing this kind of work for this amount of money.’ ” Now he champions Botox as a means of perking up sagging breasts.

Then there is DLK on Avenue, a 10,000sq.-foot edifice in midtown Toronto billed as Canada’s first free-standing emporium of non-surgical skin enhancement, which has treated more than 2,000 clients since it opened last year. It’s operated by dermatologist Lisa Kellett, who began her career in 1996 in medical dermatology but switched to cosmetic procedures a year later. Her specialty is laser technologies, which are covered by provincial health insurance only in rare cases.

The increasing cosmetic-ization of the Canadian medical system is evident in subtler and less quantifiable ways: Botox brochures in family doctors’ waiting rooms, tales of GPs shuttering their practices to focus on “injectables” and laser hair removal, doctors’ glossy websites advertising dermabrasion, and the lengthy wait times to see dermatologists for medical—rather than aesthetic — reasons. Botox? It’ll be two weeks. A suspicious mole? You could wait months for an assessment, depending on where you live.

“Everyone’s in on it,” says Paul Cohen, a high-profile Toronto dermatologist. “Anesthesiologists, general practitioners, even ophthalmologists are doing cosmetic stuff. You hear about dentists doing laser on skin.” He says he routinely gets calls from colleagues who are GPs, wanting to learn Botox technique.

And as physicians increasingly devote time catering to those of us on a quest for firm, unlined, hairless skin, the availability of care for people who are actually sick dwindles. A report published by the Ontario Medical Association last November referred to family medicine as “a dying specialty” in need of “urgent resuscitation.” The number of dermatologists, too, is in decline, from 555 in 2001 to 523 currently, with no representation at all in the Northwest Territories. Edmonton dermatologist Gordon Searle is currently updating a workforce survey he conducted in 2001 with two other dermatologists that tracked the downward drift, which is also attributable to government quotas on student enrolment and residency positions. “We were charting our own extinction,” he says. “The number of [dermatology] training positions at the time was six.”

That study revealed that in 2001,56 per cent of members were performing services not covered by provincial insurance plans, though only six per cent said they were devoting more than a quarter to a fifth of practice time to cosmetic work. Searle’s updated results are expected next year. Anecdotal evidence suggests the amount of time devoted to cosmetics will have risen significantly. When Cohen began his practice in 2001, for instance, cosmetics comprised five per cent of his time; now it’s 30 per cent. Searle’s 2001 study also revealed a disparity in wait times for medical and cosmetic services. A patient in medical crisis would certainly receive immediate service, but one with a non-lifethreatening condition such as acne or eczema waited an average of seven weeks, which could extend to many months in areas with few practitioners. The average wait for non-insured procedures like Botox, on the other hand, was only 4V2 weeks.

In an age in which the Prime Minister’s girth is debated with more gravity than his policies, the focus on epidermal improvement is hardly surprising. “Rejuvenation” and “enhancement” have become boomer bywords; injecting a poisonous toxin to freeze facial muscles is regarded as basic grooming in many circles.

For doctors, the financial incentive is obvious: there’s significant money to be made injecting Botox and the filler Restylane into facial skin or employing lasers to banish spider veins and resurface skin. “In 15 minutes I can inject Botox and make three, four, five hundred dollars,” says Cohen. “In the same 15 minutes I can excise a malignant melanoma and make $50.”

But physicians say mounting annoyance with the medical system is also driving the flight to cosmetic and other non-insured procedures. They cite hassles with provincial health plans, the failure of government to pay for ongoing preventative consultation, and the pressure to balance providing adequate care to patients with not falling behind financially. The shift to cosmetics isn’t the first choice for many. “Do you think for one minute if they were adequately compensated they’d do it?” asks Goldhar. “They’ve had years of training. They want to do a good job but they can’t.” “The bottom line is, the answer is much more complex than doctors leaving to do

Doctors’ worth is recognized far more when working in the private sector, as consultants, say, than by government, Abells observes.

“We’re no different than any other group who expect to be respected and paid for what they do,” he says. “We have to run a business, too.”

Morale is also a factor. Cosmetic work can be satisfying. Clients are generally happy and appreciative; results are instant. One GP who shut down her family practice in Toronto to do full-time cosmetic work says she’d grown tired of dealing with complaining, unhappy patients—with sick people, in other words.

Cohen echoes the sentiment. “You get a taste of it and you think this is a great way to make a living,” he says, though he has no plans to abandon medicine. “It’s tempting financially but I have too much training. I don’t want to waste that.”

BOTOX? IT’LL BE TWO WEEKS. A SUSPICIOUS MOLE? YOU MAY WAIT MONTHS FOR AN ASSESSMENT.

Other doctors point to the thrill of being at the dermatological forefront. The most exciting technological breakthroughs are happening on the cosmetic side, says Alistair Carruthers, a Vancouver dermatologist who, with his wife, Dr. Jean Carruthers, pioneered the use of Botox in Canada in the 1980s. Carruthers made his practice exclusively cosmetic in 1999. Treating skin cancer was becoming routine, he says. “But all of these new procedures were pushing the envelope.”

Many doctors say their more lucrative noninsured work permits them to spend more time with medical patients or even to do pro bono work. Kellett, for instance, provides free laser treatment for children to remove surgical and traumatic scars, a service she recently extended to adult victims of domestic abuse.

Many of her referrals come from the Hospital for Sick Children—which, tellingly, doesn’t have the cutting-edge technology she has.

The cosmetic-ization of medicine paves the way to a divide between patients and customers. “You have to separate them,” says Cohen. “Customers expect service; all of a sudden it feels like you’re working at the Gap.” And that ushers in new ethical complications. In the cosmetic marketplace, caveat emptor prevails, notes Carruthers, who points out that many non-specialists are not adequately trained. He recently saw a woman who nearly lost her lower eyelid after an injection administered by a GP

As patients, we’ve been taught physicians know best; they’re God-like caregivers with a mandate to make people feel better—literally. But in the consumer marketplace, feeling better is a state of mind measured in terms of “self-esteem.” Customers make their own diagnosis. When Kellett consults with clients, for example, she asks them what they want to change when they look in a mirror. She says she will refuse to do certain procedures if she doesn’t believe they’re in the client’s best interest or if expectations are unrealistic. Still, the client is setting the agenda.

There is also a subtle blurring of cosmetic and medical care. Kevin Smith, for instance, who doesn’t see patients for non-cosmetic services, will provide medical care to his cosmetic customers if he spots a problem. He sees it as his responsibility. “You have to be a good dermatologist,” he says. Paul Cohen, for his part, has diagnosed five melanomas while doing cosmetic work. As such, cosmetic procedures—for those who can afford them—can be a shortcut to medical attention.

Eike Fuller-Kluge, a professor of biomedical ethics at the University of Victoria, takes issue with physicians doing any kind of cosmetic work. “Traditional, therapeutic medicine mandates the use of cosmetic techniques in certain cases, such as burns or deformities, to use a politically incorrect term,” he says. “But as soon as you start moving into beautification, the patient becomes an object, an easel on which the doctor can create. That constitutes a fundamental shift to medicine as a commodity.” The professional-patient relationship in such cases follows an “engineering” model, he notes, one that does what the patient asks and what society expects. “That’s unacceptable,” he says. In the current climate, however, that’s exactly what doctors are delivering. M 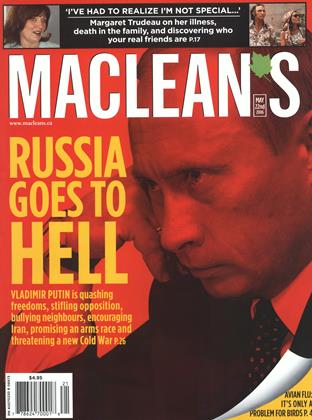