Cracking down in Ethiopia CHRIS TENOVE May 29 2006

How a cross-dressing TV host is shaking up Pakistani broadcasting

He’s just a feminist, crossdressing TV queen. But in Pakistan, Ali Salim, the 27-year-old son of a retired colonel, stands out like the faux velvet couch from which he does interviews. Better known for his drag persona—foxy diva on the hunt— he’s become the über-militarized South Asian state’s most famous TV personality.

Salim, who believes his act empowers, not satirizes, women, grew up awed by his divorced mother. He first found fame impersonating former Pakistani prime minister Benazir Bhutto, currently exiled in Dubai, who was the first woman to lead a Muslim country. Waxed, made up, sometimes donning a jewelled mini-sari, Salim has a salty schtick that’s a first in a country long dominated by mullahs and the military. (On a recent Saturday, eyelids lowered, he turned to big-time lawyer Aitzaz Ahsan and whispered, “Would you mind if I call you ‘easy’? It’s so much easier on the tongue.”)

But it’s not all camp and innuendo. Trampling taboos in spiked heels, Salim didn’t shy away from discussing the case of Mukhtar Mai, the woman gang-raped on the orders of her village court. He’s also levelled awkward questions at politicians and hard-liners, like Naimatullah Khan, the former mayor of Karachi and a member of the Jamaat-eIslami religious party.

The hour-long Late Night Show with Begum Nawazish Ali runs on Aaj TV, one of about 25 channels created since Pakistan’s president, Gen. Pervez Musharraf, liberalized media laws in 2003 as part of a larger plan to introduce “enlightened moderation” to the country. Some observers wonder whether Salim’s show will survive as he teases both the military and the fundamentalists (he calls them “fundos”). At present, though, the two groups are distracted, and at loggerheads: for his support of the U.S. war on terror after 9/11, Musharraf—the fourth military leader to steal office by coup—has enraged Pakistan’s many Islamist groups. Given the mounting political turmoil, dealing with a cross-dressing TV host may not, for the moment, be a particularly high priority. M 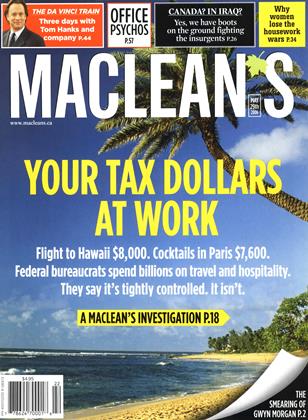