Here, queer and the worst cad ever SHANDA DEZIEL May 8 2006

The Sopranos social club will never be the same. As soon as Tony Soprano found out that one of his guys, Vito Spatafore, was gay, the Freudian slips started to fly. He called Vito his best earner, “a come-from-behind kinda guy.” Rather than discuss Vito on the street, Tony says, “Let’s take this in the back.” And when explaining the situation to his therapist, he says, “The guys that are working for me are asking for head—his head.” It may prove difficult for Tony’s gang to come to terms with a “fanook” mobster, but it’s exactly what TV needs. After more than a decade of gay characters who are unthreatening, unassuming, thin, stylish, sensitive—utterly sanitized—Vito is a fat, foul, underhanded, murdering, leather-chapswearing breath of fresh air.

One of the first openly gay lead characters on prime time was Matt on Melrose Place—or DoorMatt, as he came to be known. He was the buddy on a sex-crazed soap opera who got no action whatsoever. Then came the ever-likeable Ellen DeGeneres, the stylish and sassy guys of Will & Grace, and the queeny but helpful designers of Queer Eye for the Straight Guy, paving the way to today’s gaypositive entertainment utopia, where a movie about two sheepherders in love almost wins a best picture Oscar. Now it falls to the likes of Vito and the debased Andrew on Desperate Elousewives to tear down the feel-good stereotypes of homosexuals on the tube.

Fourteen years after protesting Basic Instinct for its depiction of a homicidal bisexual, the Gay & Lesbian Alliance Against Defamation is heralding this era of the gay bad guy. “The character of Vito proves to people what we’ve known for years,” says Damon Romine, a spokesperson for GLAAD.

“Gay people are everywhere—doctors, teachers and even mobsters.” Vito didn’t become an extortionist/killer because he’s gay, and Andrew on Desperate Housewives would be a scheming manslaughterer regardless of his persuasion. Over on The Wire there’s Omar, a ruthless stickup artist and a tender lover who’s so shattered by his boyfriend’s murder he joins forces with the police for a while. The fact that these men are gay helps humanize them. That’s quite a shift from the gay characters who had to overcompensate with niceness to come across as sympathetic.

It was around the time of Six Feet Under that things started to change. Keith Charles advanced the tough gay-guy agenda as a violence-prone cop who wasn’t all that sensitive at home either. The show’s fairly mainstream audience was presented with very real, groundbreaking gay sex scenes, the likçs of which hadn’t been seen outside gay-focused shows like Queer as Folk. These days, subplots on Desperate Housewives and Prison Break—which aren’t out to tackle gay themes—allude to gay sex. (T-Bag, the sexually predatory character on Prison Break, wasn’t gay in the outside world; for him the sex has everything to do with immediate need and power, and nothing to do with orientation, a reality hinted at on The Sopranos when Tony shrugs that guys who partake while incarcerated get “a pass.”)

Whether Vito will get a lifetime pass is yet to be seen. The actor who plays him, Joe Gannascoli, says he’s had flak from a few “morons” back home in Brooklyn who still don’t get it. And he says some of his cast mates wouldn’t have taken on that kind of role (although James Gandolfini played a gay mobster on film, in The Mexican). Gannascoli, who’s straight, actually suggested to the writers they make Vito homosexual. He gave them a book about an out gay mobster whose specialty is chopping up body parts. “I figured they’d do that one scene where I’m piping the security guard and that would have been it,” says Gannascoli about a scene from last season in which Vito was caught performing oral sex on a man. “But they made it a main storyline this year and I’m grateful for it.”

So are audiences, who are treated to thoughtprovoking scenes as the Mafiosos argue over whether to whack Vito—and end up facing their own prejudices and hypocrisies. “Almost every gay stereotype and slur was uttered by Tony’s crew, who use masculinity and honour and religion within the Mafia to justify their hate,” says Romine. “But you also got a glimpse into the evolution of acceptance. Tony told his therapist, T don’t know what to do.’ And she asked him, ‘Why do you have to do anything?’ He realized that Vito is just another human being wanting to live his life. What The Sopranos has done in its own unconventional way is tackle homophobia.” And only in that way is Vito a helper. M 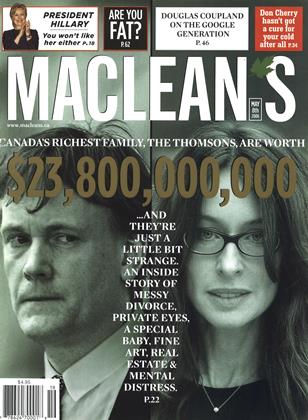