The polar bears kept repeating things. So did a lot of humans after the arrests.

Each day last weekend, I tried to write about terrorism and then on Sunday afternoon I gave up and went to the Toronto Zoo. My choice was terrorists or zoo animals

and between the two lots of animals, it’s no contest. The hippopotamus, his bottom in some shallow muddy water and his top basking in the sun, lay indifferent to the entreaties of his young keeper who wanted him to get up for the visitors. Four African cheetahs sprawled motionless, deaf to the Canadian teenage yob shouting at them with a grating “Yaaah.”

Yaah, I thought to myself. I know what’s happening back in the world of media Homo sapiens as they come to grips with this alleged terrorist plot. A lot of creatures, not half as efficient at digging up things as these Malayan tapirs, will be snuffling around in front of TV cameras looking for “root causes.” At least one bushy-bearded man in a black coat will be scolding Canadians for something or other.

A mayor/police commissioner/spokesperson will issue an urgent call to a becalmed Canada, urging Canadians to beware of the backlash they are in absolutely no danger of expressing. The CBC will get Noam Chomsky to explain that the alleged terrorist plot in Toronto is our fault because we Canadians have become lickspittles of the Americans in Afghanistan. Far better to be here, eating a Nestlé’s Rolo ice cream cone and watching the Canadian beaver do what it does best: submerge itself underwater, turning its clumsy beached self into a silent streak of silvered brown beauty where it can hear and see nothing of what is actually happening on land.

I was wrong. The CBC got the anti-American British journalist Robert Fisk instead of Noam Chomsky. Fisk explained that Canadians were in Afghanistan as combat troops to do America’s bidding. My favorite

interviewer, Nancy Wilson, did her best but she didn’t seem to know that our troops are actually doing the bidding of the UNmandated, NATO-led, International Security Assistance Force.

The spotted hyena stayed at the entrance to its cave just far enough away to mask its unattractive appearance. In my mind, I equate jackals and hyenas, which is inaccurate. Hyenas are promiscuous, wont to be cannibals, hunt, skulk, and eat the droppings of other animals as well as their flesh and bones. If they were human beings, they would work at a British tabloid. Jackals pair-bond, are semisolitary, hunt and scavenge. I suppose they would work at a broadsheet. This zoo hyena, devoid of its howling pack and therefore any ability to do real evil, seemed quite lost.

The Toronto Zoo is midway between zoo and wildlife park. There was a time in the zoo world when only the animal park was considered “modern.” Everyone was very proud of all the land the animals had then, but such zoos had a drawback: you couldn’t see the animals—they were black dots far off behind a fence—and a bird’s-eye view is really for the birds. Still, watching the polar bear, you can’t help feeling that big animals need more room.

The Toronto polar bear paced a dozen steps from one side of his cement enclosure to the other. He sniffed the wall, half-levitated himself, turned and walked back to the wading pool where he did a step backwards, raised his paw high, turned left to pass the sleeping lady polar bear, and went forward to begin precisely the same set of

Repetitive movements by polar bears are a given in the zoo world. Some studies say “enriched” enclosures help them. Some say it makes little difference. In captivity, they cling to these patterns. When people make such repetitive stereotypical movements, they are usually diagnosed as suffering from a mental illness.

After the arrests, a lot of human beings made a lot of repetitive noises. We were reminded, as if we needed to be, that the security and safety of Canada is as much in the interests of Canadian Muslims as anyone else. True enough, but a bird’s-eye view. Three

paces closer to the cement wall, officials, including those from CSIS, explained that the arrests were no reflection on any specific community or “ethnocultural group,” a mouthful of a category which didn’t really paper over the fact that all their arrests were of Muslims, not Zoroastrians or Baha’is, largely of immigrant parents from parts of the world that bear very little resemblance to Switzerland. The grey beard of Montreal’s Egyptianborn imam Salam Elmenyawi, head of the Muslim Council of Montreal, was much in evidence as he angrily claimed that the uncovering of this alleged plot has exposed the routine racism directed toward Muslims.

In 198O, I attacked Canadian notions of multiculturalism in my book Confessions. One of my arguments then was that Canada’s official policies of multiculturalism actually lead to unrepresentative people (such as Elmenyawi) becoming self-appointed spokesmen for large groups with diverse views. The government has no knowledge about the beliefs and politics of any com-

munity. Like-minded people get together and elect each other. Whoever steps onstage gets the gig—and tax dollars. In this sense, all “spokesmen” are self-cast.

I remain convinced of this. Perhaps it’s wishful thinking, but I believe Canadian Muslims would take to the streets—not in a march against Canadian racism—but solely and utterly to condemn and expunge Wahhabism and Islamism from their mosques. Except none of the self-appointed Muslim leaders would dare or even want to organize such a march. And none of our simpering officials would ever mention that that is the problem, not us. M 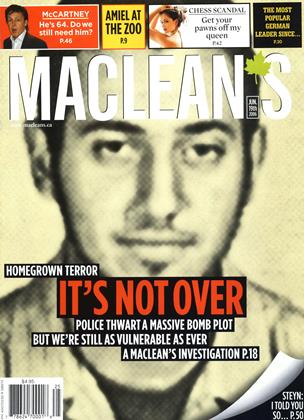