How we got these survey results SANDY FARRAN June 26 2006

In February, when Maclean’s editors began to lay the groundwork for this issue, the intention was to make the Maclean’s University Graduate Survey its centrepiece. That plan hit a hurdle when several large Canadian universities declined to participate. Their withdrawal sparked a number of others to follow suit. University officials gave a myriad of reasons for not participating: allegedly flawed methodology; concern that the participation rate in a similar study in 2004 was too low; time constraints; survey fatigue. Others said that they were in favour of the Maclean’s survey in principle—and had previously lobbied for its creation—but worried that with many large universities known to do poorly on student satisfaction not participating, these otherwise mid-level performers would find themselves relegated to the bottom of a reduced pile. It was a domino effect.

At Maclean’s, there were choices that had to be made. Potential university students want to know what the experts—their peers at university—have to say about their experience. And Maclean’s had promised to put out an issue doing just that.

After dozens of meetings and conversations with senior university officials across the country, one reason kept popping up among many of the schools opposed to the Maclean’s survey: most universities already participate in the Canadian Undergraduate Survey Consortium (CUSC) and/or the National Survey of Student Engagement (NSSE). They’re extremely valuable surveys, but their findings are largely for senior university administrator eyes only. Last April, Maclean’s decided to change that.

Some universities have long been open about their results. UBC, Victoria, Winnipeg, New Brunswick, and Regina already had their CUSC results online. Some other universities posted summaries or benchmarks of NSSE or CUSC on their websites, at a level of detail that ranged from very useful to almost useless. Many universities posted almost no results. Anyone trying to compare how students at universities X, Y and Z had responded to surveys would

likely have come up empty-handed.

When Maclean’s asked for the release of several key questions from NSSE and CUSC, several institutions provided the information without hesitation: Brock, Acadia, SFU, Nipissing, UNBC, Queen’s, Waterloo and Wilfrid Laurier. Several others disclosed their results after some debate.

Others flatly refused. This included New Brunswick, which declined to release its NSSE data and even requested that Maclean’s not publish its CUSC data—even though it was already on their website. Conversely, after initially balking at the information request, U of T, along with Alberta, Calgary and McMaster, jointly announced they would be making all of their NSSE information public. But U of T balked at releasing its CUSC data, which was only conducted on U of T’s Scarborough campus. University officials said they were concerned that Maclean’s would attribute the CUSC results for U of T Scarborough to the entire university.

All provinces have freedom of information and protection of privacy (FIPPA) legislation, and as of this spring, in seven out of 10 provinces, the legislation applied to universities. Even in provinces not covered by FIPPA, universities generally have voluntary internal codes of conduct that mandate transparency and public release of information.

To get NSSE and CUSC data that universities declined to release, Maclean ’s filed 22 freedom of information requests in six provinces. Some universities responded by immediately posting the results to their websites. In this case, the requests were withdrawn. In other instances, Maclean’s never heard from the university’s FIPPA coordinator, though legislation requires that requests be acknowledged within 30 days. In such cases, Maclean’s filed a formal review to the information and privacy commissioner.

As of June 16, results from half of the universities to which we filed FIPPA requests had been provided to Maclean’s, either by the universities or by a FIPPA coordinator. The remaining requests are still making their way through the legal process. When CUSC and NSSE results for the missing schools are made public, Maclean’s will be publishing them and posting them on our website at www.macleans.ca/university. M 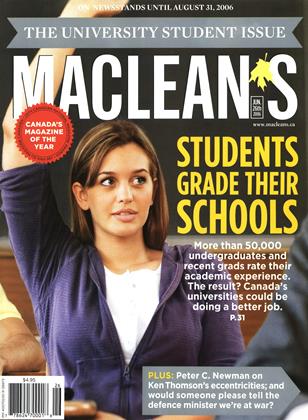