Rejection can trigger a brain ‘primed to do something dangerous’

What went on in Frank Mailly’s brain before he killed his estranged wife, himself and their three children in a fit of rage and possessiveness? While Mailly may have been abusive and controlling toward his wife for years, what put him over the edge was her insistence that their marriage was over. On April 2, 2006, he burned his farmhouse to the ground, taking all five lives.

What snapped in Marc Daniel’s brain to make him stab his ex-girlfriend Lori Dupont to death? Dupont had broken up with Daniel, but he had continued to pursue her obsessively. Nine months after the breakup, on Nov.

12, 2005, he attacked and killed her at Hôtel-Dieu Grace Hospital in Windsor,

Ont., where they both worked. He then took an overdose of drugs, and died a few days later.

New research in brain chemistry provides insight into two of Canada’s most recent and gruesome cases of domestic murder. Helen Fisher, a research professor in the anthropology department at Rutgers University in New York, believes love is an addiction, and being rejected is like going through a chemical withdrawal. Seeking to find the chemical basis for the mania of love—for feelings such as longing, euphoria, despair and pining—she has used functional magnetic resonance imaging (fMRI) to study the brains of people happily in love. Her scientific explorations of love and a nasty personal breakup led her into the realm of rejection, and what happens in the brain when someone is dumped.

In a recent study, Fisher conducted brain scans on 10 women and five men who were in love but had recently been rejected. While in the fMRI machine, they were shown a picture of their ex-lover. “Being rejected activates one of the most powerful brain systems

on earth,” she found. “Romantic rejection is so lethal. Not only lethal to the individual and family members, but also society.” Rejected lovers showed greater activity in an area of the brain called the nucleus accumbens. This region is associated with risk-

HER ADVICE? ‘WHEN SOMEONE SAYS, “MY WIFE IS LEAVING ME,55 YOU HAVE TO TAKE IT SERIOUSLY5

taking, gambling, focused attention on a person, and motivation to win. “When someone is lying in the MRI machine looking at a picture of the person who rejected them, those brain centres suck up blood because they are working harder. When you look at the brain slice by slice, some parts don’t look any different, such as the area for smell or rhyming words,” explains Fisher, author of four books on the chemistry oflove.

Fisher’s team also found activity in the anterior insular cortex, which is associated with pain in skin and muscles, and the lateral orbital frontal cortex, a region linked to controlling anger, obsessive-compulsive behaviour, and ruminations on the intentions and actions of others. “Add it all up and you’ve got a brain that’s primed to do something dangerous,” she says. “This work leads us to understand more clearly the science of ad-

diction. It helps us understand more about stalking and homicidal rages.”

Her advice? “When someone says, ‘My wife is leaving me,’ you’ve got to take it seriously. There are changes going on in the brain and some people can’t deal with these. They are a serious liability to themselves and others. It’s a medical emergency.”

While brain scans may be able to show the depth of someone’s brain activity, an fMRI alone cannot reveal how well he or she deals with anguish. Though these changes in the brain may occur commonly in both men and women, they only trigger violence in a few. This is because most people can control their impulses. Fisher calls this “a triumph of culture over biology.”

In 2004, 74 people in Canada were killed by a current or former intimate partner, according to the latest figures from Statistics Canada. By far the majority of these cases are males killing females. In most cases, family homicides involve a single death. But when several victims are killed (in seven per cent of cases), it is typically the perpetrator’s own children who are also victims. Most of these multiple killings culminate in the suicide of the accused, 95 per cent of whom are male. Those most likely to turn abusive are those who are demanding and needy, and whose selfworth is very dependent on their partner, says Antonia Henderson, a research psychologist in Vancouver who studies partner abuse.

While studies show men and women are equally capable of abusing their partners, men do more harm. “Domestic violence goes across all relationships. But serious injury and death—it’s men stalking and killing women,” says Peter Jaffe, a professor at the University ofWestern Ontario and academic director of the Centre for Research on Violence Against Women and Children in London.

Dr. David Eden is an Ontario coroner who studies the patterns that precede domestic violence deaths. He agrees with Fisher that separation can be deadly. While preoccupation and instability may be harbingers of abuse, the most potent predictor of all is a recent breakup. “Imminent or recent separation is the risk marker. It is outstanding in its importance,” he says.

The most horrific manifestation of a man’s inability to cope with breakup is killing not only his partner but also their children, and then himself, as Mailly did. “It is the same pattern to the extreme,” says Jaffe. “The man is saying if he can’t have her, then no one else should either, and the same with the kids. He is motivated by depression and anger and a sense of vengeance. His life can’t move forward, so no one else’s can either.”

Jaffe suggests the most vital time for family, friends and caregivers to rally around is early in the breakup. “The gravest danger is weeks and months after separation, when she tells him it’s over,” he said. Men who seem dangerously volatile may need counselling. “Few are natural-born killers. They need to develop a sense of the future. We’ve seen too many cases where the family has seen the warning signs and in retrospect the death could have been prevented.”

By the time a couple is divorced, the danger almost always recedes. Historically, femicide after divorce is almost unheard of, accounting for only one to two per cent of cases. This makes sense biologically, Fisher says. “Eventually, the brain chemistry recedes.” Indeed, her study included spurned lovers in what she calls the “protest phase” of rejection, when they are still hoping to win back the affection of their loved one and are willing to do “crazy things like jump on a plane and meet them in China for lunch” to achieve that. Over time, this gives way to the “resignation/despair phase,” when the finality of the breakup becomes clear and a sense of despondency and resignation takes over.

In the future, Fisher would like to scan the brains of people at various stages of love and rejection, to note the changes over time. “Breaking up is never easy,” she says. “You lie in bed and sob. You drive too fast. You stalk. But this can’t go on forever. After a while, you can remember the pain, but you are not going through it at the same level.” M 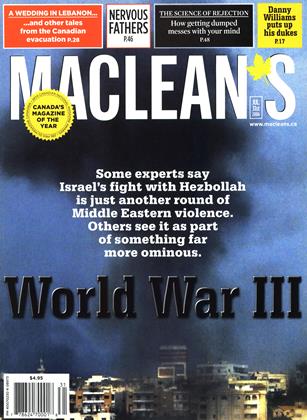