involving Israel in recent decades, this current war was fought not just on the battlefield, but on television screens and in newspapers around the world. In this arena, military success or failure means little next to the question of which side is judged to have been the most “moral” in its prosecution of the war.

Israelis complain of a double standard. Most media reports correctly point out that Israel has killed far more civilians than Hezbollah. But Hezbollah’s entire campaign of raining rockets on Israeli cities and towns was geared toward indiscriminate slaughter. That they killed comparatively few civilians is a question of result, not intent. The Israeli armed forces have killed hundreds of Lebanese civilians, but argue that their intent has been to hit military targets. They say that most of the resulting civilian deaths are due to Hezbollah’s well-documented practice of hiding behind women and children.

It is the results, however, the photos of dead Lebanese children, which have such a profound effect on world opinion, and it is why Hezbollah has been so eager to show foreign journalists what Israeli air strikes have done, and why Israel is anxious to explain them. Some Israelis, though, resent the fact that explanations are considered necessary. “I don’t trust our politicians,” said Erez Attal, an Israeli Jew whose family emigrated from Tunisia. “The only thing that matters to them is to travel abroad with silk ties and show the world how well Jews behave. They are more

worried about how we are perceived than the safety of the Jewish people. Instead of worrying about how Jews are perceived, we should tell the world that for every Jew killed we will kill 1,000 Arabs. We need to be strong.” Some former and current Israeli soldiers disagree. Shachar Nativ, who served in the Israeli army for more than four years, including in Lebanon, said Israel has an obligation to avoid killing civilians. “If not, we become as bad as them. We become as bad as the terrorists. It also harms the morale of our soldiers, and it nullifies the value of human life. And this is the greatest danger when you’re in the military.”

Israel’s case is not helped by incompetent editors and journalists who covered the conflict. Reuters released a photo that had been doctored to make the effect of an Israeli air strike look worse than it really was (the freelancer was fired and his work purged from the agency’s archives). Some of the photographs of rescue workers and dead children at Qana appear to have been posed for the benefit of photojournalists. And a New York Times online slide show contained an image of an apparently dead Lebanese man being pulled from the rubble after an air strike. He is seen alive and well in other photos (the paper subsequently published a correction).

An Israeli soldier might fairly ask why he should play by different rules than Hezbollah if much of the world’s media have already decided to depict him as a war criminal. Erez Gil-Har, 35, an Israeli reservist, has an answer: “I don’t give a damn what the Europeans think. I have my own standards.” M

ON THE WEB: For other Maclean’s articles on tensions in the region, visit www. macleans. ca/middleeast 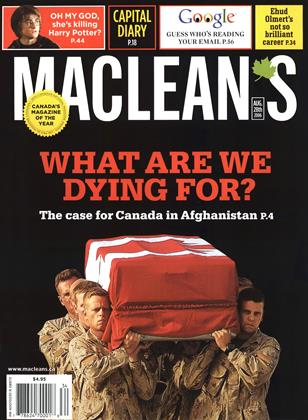