The scandal isn’t a tardy evacuation; it’s that we’ve fostered so many indifferent citizens

The question is: Why are they “in harm’s way”? How did “50,000 Canadians” come to be in Lebanon? Is it one of our major trading partners? Has Bombardier opened up a Ski-Doo plant there? Is Beirut where the Quebec Nordiques wound up? 50,000 Canucks out of a total Lebanese population of 3-8 million works out to about 1.3 per cent of the population. Hezbollah claims 400,000 supporters in Lebanon after 20 years of diligent recruiting and investment by Iran, but Canada has managed to amass an eighth of that figure with nary a thought. Despite significantly smaller populations than our G7 colleagues, we have more citizens in Lebanon than the Americans, British and Germans.

France is the former colonial power in Lebanon and the Western country with which it maintains the closest ties, yet even the French can muster only 30,000 citizens in the country. Formerly known as “the Paris of the Middle East,” these days Beirut would appear to be the Saskatoon of the Middle East. Another decade or two and Lebanon will boast more Canadians than most of the Maritimes. If Canadians were represented within the global population as generously as they are among the Lebanese, there would

be over 81 million Canadian citizens living outside Canada.

And yet none of the CBC reporters repeating the “50,000 Canadians” line every hour on the hour, day in, day out, apparently had sufficient curiosity to ponder what that bland statistic signified. The Calgary Herald gamely attempted an explanation: “Booming Country Drew Many Lebanese Back Home: Why So Many Canadians Are Trapped By Crisis.” But that doesn’t explain why it only drew them home from Canada, and not France, America, Australia or anywhere else. Broadway producers, accustomed to going to parties and hearing doctors, bond traders and orthodontists tell them what’s wrong with their plays, like to say that show business is everybody’s second business. Canada would seem to be everybody’s second nationality. The question is whether it’s still anybody’s first.

Not long before 9/H, I picked up a book called Citizenship and National Identity by David Miller. He’s a liberal nationalist and in the long-ago summer of2001 it all seemed very theoretical. “The historic national community is a community of obligation,” he writes. “Because our forebears have toiled and spilt their blood to build and defend the nation, we who are born into it inherit an obligation to continue their work, which we discharge partly towards our contemporaries

and partly towards our descendants.”

Well, so much for that. Mr. Miller is a British academic and, rereading his book five years on, I’m struck by how often he mentions Muslims. In doing so, he seems at least to imply that this particular identity group is not quite as others—Welsh, Jews, Nigeriansand yet every time he brings up the subject it’s to reassure us that there’s nothing to worry about. “Consider a Christian facing an Islamic group who declare that their goal is to make Britain into an Islamic state,” he posits airily at one point, presenting it as a kind of abstract exercise in the limits of mutually respectful multiculturalism. “Valuing the identity espoused by the group facing you commits you to denying values you already hold: if you are a Christian, then you must believe that the Christian life is a valuable life, and therefore you cannot value the project of eradicating Christianity in the name of Islam.” I’d clean forgotten I’d read anything that specific about the Islamification of the West before Sept. 11th. But, as the author notes, the Muslim group Hizb ut-Tahrir were stating plainly and openly in the early nineties their goal of an Islamic Britain. Miller’s book is frustrating, in that he managed to identify all the critical questions of the day without appreciating quite how pressing they are. But where he and others go awry is in misidentifying the internal contradictions of multiculturalism. In Multiculturalism and “The Politics Of Recognition,” a very early entry into the

field, Charles Taylor writes: “It makes sense to demand as a matter of right that we approach the study of certain cultures with a presumption of their value...But it can’t make sense to demand as a matter of right that we come up with a final concluding judgment that their value is great, or equal to others... I have stated this rather flatly,” he adds, somewhat superfluously. But, given that multiculturalism is principally an exercise in Western self-abasement, the presumption of greater value is the entire point. The problem, pace Taylor, is not that Group A holds values that are incompatible with Group B, but rather that Group A holds no values at all. In the modern multicultural state, we accord all values equal value: in effect, our values are that we have no values—and so the best way we can demonstrate our lack of values is by deferring to those values most antipathetic to us. One thinks of Nada Farooq, Mississauga-raised wife of one of the alleged terrorists and moderator of an Internet forum for Muslim teens. In David Miller terms, her “citizenship” may be Canadian but her “identity” isn’t: she planned to name her son Khattab, after the Chechen mujahedeen commander killed in 2002. Growing up in a Toronto suburb, she found recent Chechen history more inspiring than Canadian history, assuming she was taught any.

That’s an extreme manifestation of the problem, of course. I’d wager those “50,000 Canadians” in Lebanon are more typical: the majority aren’t Hezbollah terrorists, they’re merely indifferent to Canada. It’s a fallback position, something in the back pocket for when the powder keg goes up. A year or two or five ago, they stood before the Maple Leaf and pledged allegiance to Her Majesty The Queen and sang 0 Canada and listened to the citizenship judge blather about all the many races and nationalities in the room that were now joined within the bosom of the Canadian family. And it all meant... nothing. Which, in the long run, may be a bigger problem than Nada Farooq.

In The Power of Identity, Manuel Castells writes about what he calls “resistance identities” and the challenge they pose to traditional nation-states. I would prefer the term “resistant identities,” in the sense that pan-Islamism is resistant to the usual assimilationist pull of Western societies. Yet hard-core jihad is always going to be a minority interest. And, as those “50,000 Canadians” suggests, indifference could be far more contagious. In the thirties, there were chaps who found themselves in tricky situations in Italy or Romania, Poland or France, and so for a small consideration acquired a passport from some potential Latin American bolthole. But Immigration Canada is the first to practise the racket on an industrial scale—and to give it away.

The scandal is not that the government has been tardy in its evacuation plans for these “50,000 Canadians.” The scandal is not even that so many Lebanese have gamed Canada’s immigration system. The scandal is that there’s no system to game and, with the exception of the Toronto Sun’s Peter Worthington, no Canadian media bigwigs seem to mind. Indeed, the obvious fact that the bulk of these passports are flags of convenience only intensified the outrage at the sloth and incompetence of Ottawa in standing on guard for these paragons of Canada’s post-nationalist national identity. The Toronto Star’s lefty lovely, Linda McQuaig, morphed into a postmodern Lord Palmerston, all but demanding Harper dispatch HMCS Rustbucket to blast Tel Aviv. “The first duty of a Canadian prime minister is the safety of Canadians,” she huffed. “So, faced with a choice of expressing support for Israel or doing everything he possibly could to protect tens of thousands of vulnerable Canadians, Harper should have opted for protecting the Canadians.” To Miss McQuaig, the Zionist Entity’s assault on Hezbollah was an unprovoked assault on an outlying Canadian province. And, if Paul Martin’s Canada Steamship fleet ever gets impounded in Antwerp, no doubt she’ll be demanding the Liberian Air Force bomb Belgium. M 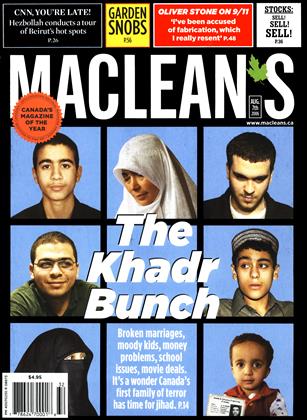