A WEEK IN THE LIFE OF THE DALAI LAMA

On Monday, the exiled Tibetan spiritual leader was warmly welcomed by Prime Minister Stephen Harper on Parliament Hill, much to the chagrin of Chinese officials who called the meeting a “gross interference” in China’s internal affairs, and accused Harper of “disgusting behaviour.” On Tuesday, the 72-year-old monk blessed a new Tibetan cultural centre in Toronto. On Wednesday, he was scheduled to lecture a crowd of thousands on “The Art of Happiness” at the Rogers Centre.

The diminutive Jim Flaherty, finance minister, rose Tuesday in Parliament to deliver his fall economic statement. He was buoyed by such a flood of cash his head almost scraped the ceiling. Last year’s surplus came in $4.6 billion above the predicted $9.2-billion mark. In fact, the surplus hit $8.7 billion in the first five months of the fiscal year. Then there’s our rocket-powered dollar, flirting with 50-year highs. Numbers like that are helping Flaherty’s Conservatives make a distant memory of last year’s income trust reversal. Of course, we can now expect squabbles over how he intends to make use of the extra cash (see page 34)— but it’s a nice problem to have.

It started out as another bad week with regards to the treatment of religious and cultural minorities in Canada. The federal Conservatives introduced legislation requiring voters to reveal their faces when voting, unless there is a medical, rather than a religious, reason for a face to be covered. The law closed an unpopular loophole that allowed Muslim women to vote and maintain their traditions simultaneously. In a separate matter, however, we finally witnessed some common sense when the head of a Quebec language advisory body determined a Parti Québécois proposal to force immigrants to learn French is unethical. At last, reasonable accommodation.

A rip-off, but healthy

conventional ones. For four years, researchers grew fruit and vegetables and raised cattle on adjacent organic and non-organic sites across Europe. They found levels of antioxidants in milk from organic cattle to be 8 0 per cent higher than in non-organic milk. Also, organic wheat, tomatoes, potatoes, cabbage, onion and lettuce contained up to 40 per cent more nutrients. They did not, however, figure out how to make organic foods affordable to a family of average means.

FACE OF THE WEEK

Stephen Colbert was right: there is a war on Halloween. First, U.S. officials came under fire last week for allowing lead-tainted Halloween toys made in China into the country. A school in Long Island banned all costumes after three girls showed up last year dressed, a little too suggestively, as Captain Underpants. Closer to home, Calgary encouraged its residents to dole out municipal pool passes instead of candy. Despite it all, we were relieved to see that adults were unable to ruin Halloween for millions of Canadian children this year.

No accounting for it

It is the privilege of the auditor general to deliver bad news about the use of our tax dollars, and Sheila Fraser seldom disappoints. On Tuesday, she released a report accusing Ottawa of being lax when it comes to handing over its secrets to private contractors. Also in the report, she cited the Canadian military’s failure to keep track of whether its medical staff has maintained its credentials. To boot, our border is porous. All very bad news for a gov-

ernment that prides itself on accountability. Our neighbour to the south, meanwhile, was accused this week of erring in the other direction when airport security officials in Washington detained Shahid Malik, Britain’s first Muslim minister, who happened to have just attended a series of official U.S. meetings on tackling terrorism.

It has been a bloody month in Pakistan. On Oct. 18, at least 140 people were killed in Karachi by a bomb targeting former PM Benazir Bhutto. On Tuesday, a

suicide attacker killed himself and six others in a failed attempt on President Pervez Musharraf’s life. Unfortunately, Pakistani intelligence agencies are warning of more violence to come, including possible attacks on the capital by Taliban and al-Qaeda sympathizers.

It was a horrible week for celebrity do-gooders. First Oprah, celebrated worldwide for funding the Oprah Winfrey Leadership Academy for Girls in South Africa, was confronted with a sexual and physical abuse scandal at the facility. Winfrey begged for the forgiveness of angry parents. “I’ve disappointed you,” she said. “I’m so sorry.” Then, Gap Inc. admitted last week that one of its factories in India had been employing unpaid children, who worked for as many as 16 hours a day. The retailer has said it will destroy the clothing made in this sweatshop so that it cannot be profited from. This will hopefully come as some relief to Penélope Cruz, Bono and the other celebrity spokespeople for Gap’s (RED) campaign to benefit the poor in Africa.

But not that friendly

Passengers on the first flight of Singapore Airlines’ Airbus A38O paid up to $50,000 for luxurious, cruiseship-like berths, complete with double beds, Dom Perignon and lobster. Sound romantic? Well, don’t get any ideas. There will be no “inappropriate activity” in those berths, the airline has ruled. It’s an unreasonable demand, since they’re the ones who installed the beds in the first place. But it’s not surprising, considering everything else the industry has done to make flying as frustrating as possible. M 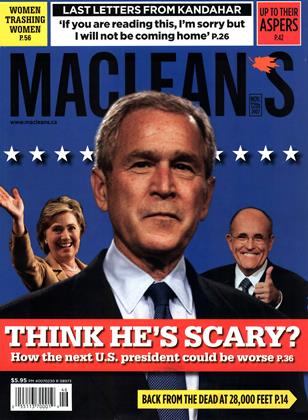