BY BARBARA RIGHTON • It was the fourth act of violence against Canadians in Mexico over the past year, although this time wasn’t fatal. Late last Saturday, while they stood on the veranda of a modest Acapulco hotel half a block from the beach, two Ontario tourists from the Niagara Falls area were wounded by bullets from a semi-automatic gun. Rita Callara, 55, and a companion whose identity cannot be confirmed, may have been the victims of a drive-by shooting. Only two weeks before, a London, Ont., man, Clifford Glasier, died after a hit and run near Guadalajara. Eleven days before that, 19year-old Adam DePrisco, of Woodbridge, Ont., was found bleeding on an Acapulco boulevard near the Mandara nightclub. He died the next day, apparently another victim of a hit and run. Preceding these incidents and still unsolved is the Feb. 20,2006, murder of Nancy and Dominic Ianiero, also from Woodbridge, at a five-star resort Playa del Carmen where they were celebrating their daughter’s wedding.

It has been a run of bad luck for Canadians in the land of tequila and sun, but it is not unprecedented. According to Canadian Foreign Affairs spokesman Alain Cacchione, 13 Canadians have been murdered in Mexico since 2002. (By comparison, the U.S. State Department lists more than 500 Americans who have died there of non-natural causes since August 2004.) The recent spate of violence has Liberal foreign affairs critic Dan McTeague calling for a travel warning. “The frequency is suggesting that the cursory ‘watch out where you travel’ doesn’t apply,” says McTeague. “We have to advise Canadians in no uncertain terms that there are risks attendant in travelling to Mexico.”

While other Canadians, notably Cheryl Everall and Kimberly Kim, the two Thunder Bay, Ont., women quickly named by the Mexican police as suspects in the murder of the lanieros, were calling for a travel ban before last week’s shootings, Cacchione only reiterates what his boss, Foreign Affairs Minister Peter MacKay, has already said: “Investigations are done by local authorities.” And, “We don’t comment on speculations.” After DePrisco’s death, MacKay did allow he would call his Mexican counterpart to ask for a progress report. “Investigation is ongoing,” Cacchione says. As for official travel warnings from the Canadian government, Mex-

ico has only landed five since 2004—four for foul weather, and one for political tensions.

For Canadian travellers interested in updates, Cacchione points to his department’s website, where the Mexico advisory that irks McTeague reads, “Caution and prudence should be exercised at all times.” When Cacchione is asked if that wording is sensible in light of the recent violence, he answers that travel reports “reflect up-to-date safety and security conditions based on information provided by our embassies and consulates abroad and other credible sources, people on the ground.” The U.S. State Department must have different sources. Last month, its website described the level of violence in Mexico as “brutal” and called for “extreme caution in unfamiliar areas.” In its most re-

cent advisory, it says as spring break approaches, more than 100,000 young Americans will travel to resort areas throughout Mexico.

“While the vast majority enjoys their vacation without incident,” it says, “several may die and hundreds will be arrested.”

If that sounds ominous, Colin Mooers, a Ryerson political science prof on sabbatical in the mountains between Acapulco and Mexico City, accepts the country’s potential dangers with a shrug. “Your average person who wants water and beach and sun is relatively safe here,” he says. “The tourist areas are a magnet for crime, but they do have more policing.” At the Association of Canadian Travel Agents in Ottawa, president Christiane Théberge also demurs. “I don’t think we can say that Mexico is not a safe place,” she says. “More than one million Canadians travel there every year.” What Théberge would like the Tories to do, she says, is pressure Mexico “to make sure inquiries are done properly and with results.” But after a crime has been committed, that may be too little, too late. M 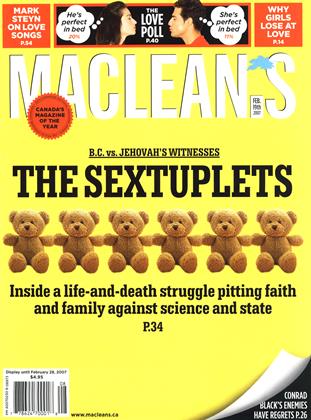