Not all degrees are created equal

Not all degrees are created equal ERIN MILLAR April 2 2007

Not all degrees are created equal

THE SURVEYS: WHAT THEY ARE, AND HOW THEY WERE DONE

You will find results from three surveys on the following pages: the National Survey of Student Engagement (NSSE), the Canadian Undergraduate Survey Consortium (CUSC), and the Maclean’s University Student Survey. The NSSE and CUSC surveys, which were commissioned by the universities, ask more than 100 questions about specific aspects of the undergraduate experience—inside the classroom and beyond—designed to provide universities with data to help them assess programs and services. On the accompanying pages are the responses to several key questions.

Launched in 1994, CUSC is coordinated through the University of Manitoba’s department of housing and student life. In 2006, 25 universities took part, sending surveys to a random sample of approximately 1,000 senior-year undergrads at each university. A total of 10,464 students responded.

The U.S.-based NSSE began as a pilot project in 1999 and is distributed to firstand senior-year students. In 2004, 11 Canadian universities participated for the first time with 14,267 students completing the survey. Last year, that number had grown to approximately 60,000 students at 31 Canadian institutions taking part.

Nine institutions ranked in the annual Maclean’s University Rankings issue did not participate in either the 2006 CUSC or NSSE surveys. To provide student feedback from these institutions, Maclean’s asked them to take part in a short survey using questions drawn directly from the CUSC questionnaire, addressing such issues as the quality of teaching and the overall educational experience. Eight of the nine universities agreed (Université de Moncton declined). CUSC wording was followed and CUSC methodology was also employed: participants in the Maclean’s University Student Survey were randomly selected from students currently in their final year. Universities contacted selected students by email, inviting them to participate. Large universities contacted 1,000 students; smaller universities, with fewer than 1,000 students in their graduating year, surveyed the entire cohort.

The survey was conducted online by Angus Reid Strategies, and was active from Feb. 14 to March 12. To ensure that only those who had been chosen could take part, each individual was assigned a unique PIN. These PINs allowed Maclean’s to identify students by university while guarding their anonymity.

The Maclean’s survey achieved a 43 per cent response rate, with 2,683 students from eight universities taking part. The results, when presented for all universities, are accurate within 1.52 per cent, 19 times out of 20. Individual institutional accuracy varies from plus or minus 3.06 per cent to plus or minus 8.88 per cent.

The Maclean's survey asked only eight questions from a much longer CUSC survey. As the Maclean’s survey questions were not asked within the context of the larger CUSC survey, the inherent question-ordering and placement bias may have been different in both surveys. This may have had an impact upon the comparability of the Maclean’s results to the CUSC results, since measuring satisfaction across an extensive battery of specific questions can result in lower satisfaction scores than when asking fewer, more generalized questions. We have therefore chosen to present the CUSC and Maclean’s surveys separately. 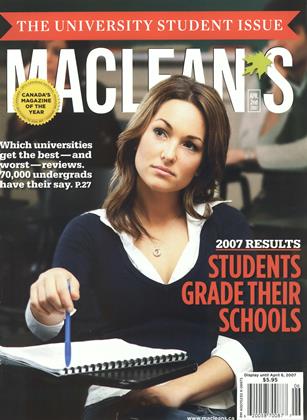