WHO BELINDA GOT CLOSE TO IN THE HOUSE

Shortly after Stéphane Dion became Liberal leader, soon-toretire MP Belinda Stronach saw her seat moved closer to the fringe, near the Bloc. That was the area where all the Liberal leadership contenders sat prior to the big convention. Capital Diary was told at the time that the candidates were banished there, far away from the cameras, to keep the leadership playing field level. After the move, Stronach found herself seated next to Tom Wappel, one of the Liberal party’s most anti-gay MPs. Stronach herself has been consistently supportive of gay rights to the point of being nonchalant, once asking her aide, “When did I become a gay icon?” To which he joked, “Just suck it up, Cher.” Because of her record on gay issues, Stronach was assigned to ask the Tories many of the Liberals’ same-sex marriage questions. Notes Stronach, “[When I was a Conservative] I sat beside Stockwell Day and tried to convince him to support same-sex marriage. I wasn’t able to change his mind, but he has a good sense of humour about it and we were able to kid around.” So was the Wappel pairing progressive outreach within her own party? “Tom was very professional,” says Stronach. “We didn’t agree on some issues.” So what was her

favourite seat in the House? “I had [Liberals] Rodger Cuzner and Dominic LeBlanc behind me at one point. They could both do very well in the private sector as comedians, but have chosen to sacrifice that talent of theirs to contribute to political life.” Stronach says she will continue to help get more women into politics in a non-partisan way. “I’ve always helped candidates who I feel would make a good contribution to the country. We need more female candidates, but I want to see that they stand for the right principles.” When asked about helping the only female head of a party, Green leader Elizabeth May, who is running against Stronach’s ex-boyfriend Peter MacKay, Stronach says she is concerned about May’s complex position on abortion, which Stronach believes should be an issue only between a woman and her doctor. When she packs up her Ottawa office once an election is called, she plans to take with her “a lot of great cartoons. In politics you have to have a sense of humour and you have to have a thick skin.”

THE ‘FEROCIOUS' JOHN BAIRD The cleverly named James Bondthemed Ottawa Gala 2-007 packed the Government Conference Centre with many Hill staffers and young Ottawa professionals, raising $30,000 for the Ottawa Centre for Research and Innovation’s school breakfast program. A fashion show featured sexy Bond girls and men in tuxedos and tight bathing suits. The honorary gala chair, Environment Minister John Baird, tried his thrust and parry skills with members of the University of Ottawa fencing club who were part of the show. The fencers said the minister was “ferocious and could hold a sword.” This is good news if sabres for MPs ever make a comeback. (Don’t forget that the two-sword-lengths’ red lines on the carpet in the House “serve as a reminder to seek resolutions by peaceful means.”) The fencers, though, say pros in their sport tend not to compete past their late 30s, meaning Baird’s fencing career is almost over before it’s begun.

ON THE WEB: For more Ottawa outtakes or to contact Mitchel Raphael, visit macleans.ca/ mitchelraphael

LUCKILY, NO ONE NEEDED A DEFIBRILLATOR At a recent announcement touting the $20,000 cheques being sent to partners of deceased Chinese head-tax payers, Canadian Heritage Minister Bev Oda presented five elderly women with letters from Stephen Harper. “It’s not the cheque,” she carefully reminded the women, which didn’t stop Shee Lin Wong, 76, the youngest of the recipients, from snapping at the minister, “I didn’t get my cheque yet!” adding that she hadn’t left her house for days waiting. Oda advised her that the cheque was in the mail. At the back of the room was a paramedic from a private company. He’d brought his trauma kit, but not a defibrillator, because he says it would have cost the government more money and the decision was not to have one available. M 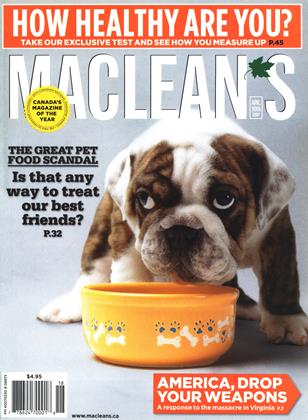