Not the brightest bulbs in the pack

Not the brightest bulbs in the pack

Arriving at the third annual Ottawa Humane Society Fur Ball, Laureen Harper realized she had forgotten her date’s ticket back at 24 Sussex. Her consort for the evening was Environment Minister John Baird, who got her back when he accidentally stepped on her beautiful black dress. Mrs. Harper wore her hair in a refined updo, showing off the double piercings she has in each ear. In conservative Ottawa that qualifies you as punk. The first holes of each ear had simple elegant dangling blue stones while the second ones had the earrings she never removes, emeralds given to her by Stephen Harper on the birth of their son, Ben Harper. The theme for the evening was Mardi Gras North. Volunteers held lanterns, guests wore masks and there were floral displays and red artificial dogs in the washrooms. The PM’s wife admired Bark & Fitz’s pooch plate that was part of the silent auction. The dog biscuits included cinnamon “roll-overs” and “mailman fingers.” Mrs. Harper, a big

MITCHEL RAPHAEL ON LAUREEN HARPER’S EMERALDS AND THE PURSE SHERPAS

WHY JOHN BAIRD HAS ONE CAT, FOUR KITTY LITTERS

supporter of the Ottawa Humane Society, is a foster parent for kittens. She says she can’t take older cats because the three adult cats she has at 24 Sussex don’t like other older cats. Baird, who was warmly welcomed at the event despite his missing ticket, has one 14-year-old female feline at his Ottawa home. Due to his demanding schedule, he says he keeps four litter boxes in his basement.

THE THINGS I DO FOR MY BOSS Welcome to the House of Ambrose. Ifyou are Rona Ambrose’s assistant, you eventually end up carrying her Louis Vuitton purse. Her previous (male) assistant begged her to go shopping

for a unisex bag. But more recent staffer Rob Serpi

is man enough to shrug it all off. In fact, it has become his trademark in the halls of Parliament. If he’s not carrying the

purse, Tories ask the macho Italian, “Where is the Vuitton?” Competing for attention in the purse department is the House of Dhalla, where Denis Schryburt, communications director for Liberal MP Ruby Dhalla, is often spotted

holding his boss’s Gucci bag. But the House of

Ambrose has a secret weapon in communications diva Joanna Bailey. Before working for Ambrose, the stylish redhead, often clad in sexy librarian chic, was a unit production manager at Fashion Television.

ON THE WEB: For more Ottawa outtakes or to contact Mitchel Raphael, visit madeans.ca/ mitchelraphael

When the winners of the 2007 Governor General’s Awards in Visual and Media Arts recently sat in the Speaker’s gallery during Question Period, Conservative MPs had a bird’s-eye view of Paul Mathieu, a Quebec native now living in Vancouver. The ceramist won the Saidye Bronfman Award for excellence in the fine crafts, receiving $25,000, up $10,000 from last year’s award. His stunning vases were displayed at the National Gallery of Canada. At QP, he wore a bright pink shirt and shocking yellow trousers. Some of the Tories amused themselves by trying to figure out who among them would look good in Mathieu’s bright clothing, which he is known to dye himself. It was decided only Edmonton Tory Rahim Jaffer could pull it off. Mathieu himself thought his colourful ensemble would best suit Stockwell Day. Asked what he thought of QP, Mathieu replied, “If artists made art like politicians make politics, we wouldn’t be very far.” So is QP the equivalent of cave drawings? “No,” the associate professor of visual arts at the Emily Carr Institute of Art and Design and author of Sex Pots: Eroticism in Ceramics, was quick to point out, “[Cave drawings] are very good.” M 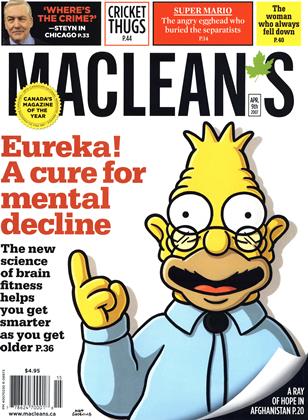