‘Bill Gates may have billions, but he has likely created many more billions in wealth for his customers’

WHEN DIANA, Princess of Wales, died in 1997, I was frankly afraid of how people reacted and I cringed when I heard the word “saint” bandied around (“The undoing of Diana,” Society, June 18). I liked Diana from the moment I first saw her on television just before her marriage to Prince Charles. Ten years after her death, I still like her. I will always remember June 1983 when she and Prince Charles came to my hometown of Charlottetown for a royal tour. There I stood in a large crowd waiting in anticipation for the already world-famous princess decked out in a plumed hat to make her way toward me. The thrill of shaking her hand and looking into those baby blues was unforgettable. It wasn’t that she did that much, but she was special and she made people happy.

Diana may well have been pitifully uneducated, but she was shrewd enough to manipulate the royal family, the press, her children, her lovers and the general public into believing that she was a caring and compassionate individual. If public opinion has turned against her in the past 10 years, this is the first I’ve heard of it. And if she was neurotic, immature and foolish, than she shared those personality traits with most of us to some degree. Joanne Kearney, Toronto

I don’t think I have ever met anybody who did not think there was a conspiracy involved in Diana’s death, and that suspicion will live and grow with the years.

Your article wasn’t a celebration of Diana’s life—it was a slam. Diana was a pawn in the royal family’s succession game. You failed to put the blame for her troubled marriage where it clearly belongs, on Prince Charles. Diana found out right before her very public wedding that her husband was in love with someone else. She must have had to put on a stiff upper lip that day, and every other day thereafter in that miserable union that ultimately cost her her life.

As a physician who has, over the past 30 some years, seen many patients with serious injuries from motor vehicle accidents, I have to

wonder why Macleans avoided one obvious issue. Diana might have survived that accident had she chosen to wear her seat belt. Dr. Ian Derby, Hamilton

WRITER ROSALIND MILES’S view on the royal family and their ornery daughter-in-law is not the issue. The issue is her writing style. I am a mother of two “penis-owners,” as well as a high-school social studies teacher. Maclean’s is a part of my home reading and a valued reference tool in the classroom. I realize that the colloquial is slipping into mainstream media these days, but I like to think

that some sources of information could be relied on to maintain a higher standard. Elizabeth Burrows, Lion’s Head, Ont.

Many people don’t want to believe that individuals earning high incomes actually help the public interest (“Don’t hate the wealthy,” Business, June 18). Let’s remember that in voluntary exchanges, each party participates only if it values what it gets more than what it gives. A fat bank account shows that an individual has given a commensurate amount of wealth in labour, management, advice, or other nonmonetary forms of value. Put another way, anybody with a net worth above zero is a net producer of goods and services, rather than a net consumer. Though it sounds paradoxical, the more money you have, the more value you have given away. Bill Gates may have billions, but he has likely created many more

billions in wealth for his customers. Canada’s wealthy are its entrepreneurs, innovators, and managers—people who create jobs and improve our quality of life. Indeed, we must consider very carefully any new “soak the rich” policy. Zach Martin, Ancaster, Ont.

Maclean’s may see itself as an advocate of all things capitalist, but I question the basis of your characterization of Canadian private medical services as better (“The complete user’s guide to better medical care,” Health, June ll). The inference is that private is better than public. What are your criteria? It well may be better for a doctor seeking to make a profitable business or a medical insurance company seeking to control its payments. But will it be better for all the people of Canada? Yes, private clinics will likely provide faster access to a doctor, but will doctors seeking to create a profitable business make better medical decisions than those working in a public hospital?

In the better medical care article about audiologists (“Tiny hidden hearing aids”), you quoted me as saying, “There aren’t actually a lot of good public sector jobs available.” This is certainly the trend for adult hearingaid dispensing services. Services for children

are quite different. The service delivery model for audiology differs by province, but in British Columbia, hearing-aid dispensing for children is performed by public health audiologists as part of the government’s Early Hearing Program. These services are publicly funded and provide diagnostics and hearing devices to young children with hearing loss. B.C.’s hearing-aid plan provides, at no cost to the families, up to two hearing aids per child up to age 3V2. In Ontario, audiological services are covered for infants and children up to entrance into Grade l through the Ontario Infant Hearing Program. Hearing aids are still covered by the Assistive Devices Program. In addition, with the expansion in public health audiology in B.C., there are many good jobs available. In fact, there is a shortage of audiologists to fill them. Lorienne Jenstad, School of Audiology and Speech Sciences, University of British Columbia, Vancouver

Your stories and private health directory were resourceful, but you listed no resources for people who are struggling with mental illness. Since it seems that we still treat body and mind as separate entities, I challenge you to publish an issue that focuses on the most current and even avant-garde treatments for these illnesses.

Thank you for setting the record straight about the media craze over “patriarchal nightmares” like Paris Hilton (and Lindsay Lohan and Britney Spears, for that matter) and the culture that thrives on denouncing girls who go wild (“Unfortunately, Paris is not burning,”

Fame, June 4). Indeed, “Female humiliation is the staple of myth, literature and pornography, and the desire to see women punished predates Biblical Eve.” When do men who go wild get clobbered? I also loved the article in the same issue about Sassy magazine by Lianne George (“Revenge of the eighth-grade misfit,” Media). I’ll be fighting with my dad for Maclean’s from now on.

The McLean High School students who object to Turnitin’s retention of their essays argue that John Barrie is profiting from their work (“How not to catch a thief,” Education, June ll). Bilge. His fortune is being made, it seems to me, quite morally by providing an important service by indexing the students’ essays. He is not looting the essays for research so that he may plagiarize and publish. In Canada, doctoral dissertations, unlike high school essays, go to Ottawa to be microfilmed, catalogued, and then lent out to anyone anywhere who wants to read them. The writer retains the copyright on his material, but has no control of its use, and there are no royalties.

These students have no use for the essays after grading; they certainly can’t make any money from them. To object to their use to combat plagiarism is selfish and, frankly, makes them appear rather suspect. Having one’s high school essay on a database helps prevent my accomplishment from being debased by a cheater.

SACRIFICES OF THE PAST

Ken MacQueen’s Q & A with John Babcock, Canada’s only surviving veteran of the First World War, was absolutely fascinating (Interview, June ll). Babcock not only tells us about the war, but he tells us about the culture of the day. I would love to read more from him. My grandfather was a veteran of the First World War, and as the story goes, returned home and threw his handgun in the furnace with a promise that it would never kill another person. It took him years to regain his composure and he eventually settled as a farmer in Niagara Falls, Ont. Although that war is well in the past, I will forever be intrigued and grateful for the sacrifice those people made for me.

Kurt Waldheim, 88, diplomat. He served two terms as United Nations secretarygeneral during the 1970s. In the 1980s he became Austria’s president, but questions arose over his involvement with Nazi troops known to have committed atrocities during the Second World War. Waldheim denied any wrongdoing.

Baron Guy de Rothschild, 98, banker. He fled Paris when his family’s banking empire was confiscated by the Nazis. After serving in the French resistance during the Second World War, he rebuilt the bank virtually from scratch. The baron was equally well known for his Château Lafitte Rothschild winery as well as his thoroughbred racehorses. 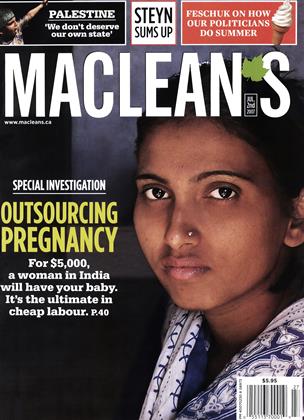