Shall I compare thee to a hyena? JONATHON GATEHOUSE August 13 2007

In a way, it’s a blessing that Canadians liken Stéphane Dion to a hamster. Because if he were a horse, there’d be a strong temptation to take him out behind the barn and put him out of his misery.

Reviews of the performance of the newish leader of the Liberal Party of Canada have been tepid thus far. (Although the latest opinion polls have his party close to the ruling Conservatives, Dion remains third choice for best prime minister, well behind Stephen Harper and Jack Layton.) But a less conventional Maclean’s survey of Canadian voters suggests the former university professor’s image problems may run even deeper than suspected.

Hotspex, a Toronto-based market research firm that measures people’s rational and emotional responses to consumer products and brands, applied its methodology to the leaders of Canada’s four major parties. And their findings are anything but encouraging for Liberal hopes of selling their new chief to a skeptical public.

When voters were asked to match the leaders, and selected celebrities, to archetypal animals, the initial response for the politicians—snakes and rats—was somewhat predictable. But asked to dig deeper, they compared Harper to an industrious ant, busy bee, or proud peacock. The NDP’s Jack Layton was a wise owl, friendly dog, or an intelligent dolphin. In contrast, Dion was a timid mouse, scared ostrich, slow cow, or a disposable pet like a fish and hamster.

Only the Bloc’s Gilles Duceppe fared worse, evoking voter visions of a stubborn donkey, or pesky black flies and mosquitoes—largely, perhaps, a reflection of the opinions of English Canadians.

Oddly, Duceppe’s animal profile was almost identical to that of Sacha Baron Cohen’s Borat. On the other hand, U2 singer Bono was an eagle, steriod-abusing-actor-turned-governor Arnold Schwarzenegger was, fittingly, a stallion, and Paris Hilton, a chicken. Political science students searching for an essay topic might like to tackle why Canadians view

George W. Bush and Osama Bin Laden as mostly the same animals—hyena, rat, snake— although the terrorist mastermind was also a deadly scorpion.

The bad news continued for Dion when voters were queried about their perceptions of our leaders’ policies, personalities and the feelings they engender. (Hotspex’s online surveys plumb 90 different emotions that influence or drive people’s decisions.) The Liberal leader is not strongly associated with any of the Top 20 issues that might motivate

Canadians as they cast a ballot. And even on the environment—Dion’s key file, but only a ‘lip service” concern of voters according to the survey—he polls behind Jack Layton. One explanation might be continued anger about past Liberal governments: just 17 per cent of respondents judged Dion to be strong on accountability, the lowest score among the four party chiefs.

Public views of the Liberal leader’s capabilities also seem harsh. In comparison to his opponents, he received the lowest score for his professionalism (29 per cent,) communication skills (26 per cent), confidence (21 per cent) and attractiveness (18 per cent.) On the flip side, voters gave him the highest marks in categories like wishy-washy and introverted

(35 per cent each) and cowardly (26 per cent). Just 13 per cent judged Dion to be tough, 12 per cent said charismatic, and eight per cent said youthful. And many of the negative impressions appear to be shared by Liberal supporters: 29 per cent of his own partisans called him unattractive, 26 per cent inarticulate.

But the deadliest number, it seems, is the 45 per cent of Canadians who judge Dion the country’s most “boring” choice. “The first hurdle any brand or persona has to cross is getting attention. When boring is high, there is never anything else,” says Ted Langschmidt, Hotspex executive vice-president. “He is the archetypal little grey man.”

The findings are based on the results of two separate surveys conducted via Hotspex’s online panels between July 6 and 16, 2007. The weighted samples of1,800 and 1,753 voters are considered accurate to ±2.2 per cent points, 19 times out of 20.

Of course, with an election still months, if not years, away, Dion has time to change public opinion. After all, Stephen Harper overcame brutal reviews during his first months as Conservative leader to become prime minister—albeit on his second try. And it’s not as if Canadians are particularly jazzed about any of their choices. Asked to rate the four leaders on a scale of one to 10, only Gilles Duceppe, 5.2, and Jack Layton, 5.1, received (barely) passing grades. Yet even in this beauty contest of the ill-favoured, Dion came last with a 3.9, behind Harper’s 4.5.

A potential bright spot for the opposition parties is that the Prime Minister’s own baggage doesn’t appear to have become much lighter during his time in power. He was judged to be significantly colder or more uncaring (35 per cent) than the other leaders, as well as unfriendly (32 per cent). Other negative characteristics that voters ascribed to him were arrogance (37 per cent), hypocrisy (36 per cent) and self-interest (38 per cent). But relatively few Conservative supporters share those opinions.

And Harper does score well on qualities like patriotism (54 per cent) and businesslike (56 per cent.) He is also judged to be the toughest (38 per cent) and most sober (40 per cent) of the leaders. Most importantly for Conservative fortunes, their leader is strongly associated with a number of issues that they have made “priorities” like trade, taxes, the economy, crime control, reform and even foreign policy.

When it comes to Gilles Duceppe, perceptions differ depending on which language the questions are asked in. Francophone Quebecers rate the Bloc leader highest on issues like education (47 per cent) and honesty and integrity (40 per cent). A full 25 per cent even go as far as saying they are “turned on” by

him, a response rate that blows his competitors out of the water. (Only 11 per cent of Canadians admit the same thing about Layton, nine per cent for Harper, and just three per cent for Dion.) Anglophone Quebecers, on the other hand, are almost unrelentingly negative about the Bloc’s head cheese—58 per cent say they dislike him, only 13 per cent view him as practical, nine per cent as emotionally stable. There is some common ground between the two solitudes, however. Both groups see Duceppe as outspoken and uninhibited 36 per cent for francophones, 33 per cent for anglophones), and hot-tempered (38 per cent versus 42 per cent).

In questions of personality and perceptions, the hands-down winner appears to be Jack Layton. Not only does he “own” traditional NDP issues like human rights, the fight against poverty, and protection of medicare, he scores higher than his opponents on values and integrity (37 per cent) and perhaps most surprisingly is second, behind Harper, on crime control. Smiling Jack is the best-liked leader (39 per cent), most trusted (29 per cent), and considered to be the friendliest (55 per cent) and most intellectual (52 per cent). The list of ego-swelling praise continues: 49 per cent of respondents judged him easygoing, 41 per cent said charismatic, 35 per cent called him a role model. As well, Layton is viewed as the most sincere (39 per cent), wittiest (45 per cent) and most honest (34 per cent). Which all begs the question of why the NDP is mired in third place?

It may simply be a case of nice guys finishing last. Layton is significantly more appealing, it seems, than the party he leads. Voters are comfortable with the NDP as the nation’s conscience, but can hardly envision it as the government. “It’s tempting to think that Layton could become prime minister if only he would cross the floor to the Liberals,” says Hotspex’s Langschmidt. “But if he did that, all of his positives would disappear. He’d be a ‘rat,’ just like the rest of them.”

As a final test of popularity, Hotspex took the leaders’ profiles and matched them to consumers’ responses to well-known brands. The results were equally illuminating. Harper’s stolid, serious and practical persona mapped close to Mastercard and Volkswagen. Layton’s fuzzy qualities, leadership and clean aura put him in the same league as Colgate and Tide. Duceppe is like Durex, perhaps a prophylactic reaction to his “sexiness.” And Dion, while cognitively associated with reliable FedEx, is emotionally like down-market U-Haul. Buyer beware. M

For more on the survey of our political leaders see www.macleans.ca 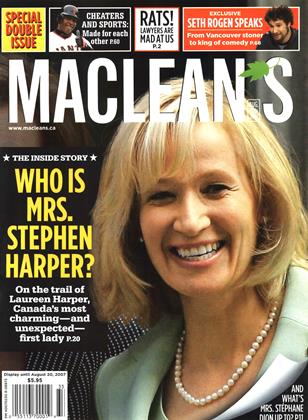