In Afghanistan these days, even faint hope is hard to come by. So forgive Canada’s weary soldiers if one longshot candidate in the U.S. presidential race lifted their spirits a few notches. With the eyes of America—or at least its fickle media— fixed on the party primaries last week, Rudy Giuliani called for a military “surge” in Afghanistan that in proportional terms would dwarf the one recently credited with stabilizing parts of Iraq. “One of the things we should do immediately,” Giuliani told an audience at a war museum in Wolfeboro, N.H., “is double the number of our troops, our American-led combat troops, in Afghanistan.”

It might have gotten greater play, considering the source. While Giuliani struggled in early Republican primaries, his 20 per cent showing in national polls means he’s still a contender, and the candidate with the most to gain by talking up national security. And

with Afghanistan, he wasn’t exactly scoring cheap political points. In many ways, America’s 26,000-strong contingent in the country is the forgotten item on the U.S. national agenda, its mission serving as an awkward reminder of the failure to capture Osama bin Laden and the seemingly endless demands of the war on terrorism. Inside the Beltway, talk of renewed commitment to Afghanistan tends to meet with ridicule. “This isn’t even worth discussing,” said Anthony Cordesman of the Washington-based Center for Strategic and International Studies in a typical response to Giuliani’s suggestion. “I can understand why it’s of interest to [Canadians]. But it’s just not on the table.”

At least not yet. As recently as late November, the top general in the U.S. Marine Corps was musing publicly about shipping his soldiers out of Anbar province in Iraq and directly into Afghanistan. The idea, said Commandant Gen. James Conway, would be to prevent Afghanistan from slipping into the same pattern of suicide bombings and sectarian violence that took hold in Iraq after the fall of Baghdad, and to finish Job

No.l in the war on terrorism. “The trend lines tell us that it may be time to increase the force posture in Afghanistan,” he said. “If it requires additional U.S. forces, then it goes back to our suggestion that maybe we need more Marines in there with a more kinetic bent.”

The Pentagon ultimately turned down Conway’s offer, saying it would pose complications to the mission’s current command structure (not to mention fanning a reported leadership feud between the Marine Corps and the Army, which comprises the bulk of the U.S. presence in Afghanistan). But even as he cast cold water on the prospect of a U.S.led troop surge, Defense Secretary Robert Gates acknowledged that 7,500 additional troops would go a long way in countering the growing violence hampering efforts to secure and rebuild the central Asian country. The question, Gates added ruefully, is where to find them.

The answer may come from the political sphere, where it turns out Giuliani isn’t the only one trying to retrain the spotlight on

Afghanistan. Barack Obama, the Democratic contender, has repeatedly promised to pull troops out of Iraq and redeploy them in Afghanistan and Pakistan, declaring the region “the right battlefield” in the war on terrorism; John Edwards has echoed Obama’s sentiments, if not the promise to transfer soldiers from Iraq. More recently, the assassination of Pakistani presidential candidate Benazir Bhutto appears to have refocused the Bush administration’s attention on Taliban and alQaeda activity in the area. The New York Times reported this week that White House security advisers are considering expanding the authority of the Central Intelligence Agency and the military to conduct more aggressive

operations in the tribal areas of Pakistan, a move that would help secure security and reconstruction operations in Afghanistan.

Canada’s stake in the surge debate is easy to see. With 2,500 soldiers on the ground, this country provides a little more than five per cent of the 48,000 foreign troops in Afghanistan. But its disproportionately high casualty rate—77 dead, including a respected diplomat—has underscored how much more dangerous its mission is than that of other NATO allies, centred as it is in the hot zone of Kandahar province.

A big boost in the American presence would likely do the job, say officers who have served in Afghanistan. “It would fix that dynamic our guys have seen in the past two years of clearing an area in the south, then moving onto your next problem area, only having to return to places like Panjwaii and Zhari

GIULIANI IS THE LATEST TO PITCH IT, BUT MILITARY LEADERS, EVEN OBAMA, ARE TALKING ABOUT IT

districts to get the Taliban out of there,” says Mike Capstick, a retired Canadian army colonel who spent a year in Afghanistan ending in the summer of 2006.

Capstick’s last assignment was heading a 15-member advisory team helping the new Afghan government craft its development strategy. He agrees that rebuilding is the long-term key to eroding support for the Taliban. “But the first step in counter-insurgency is providing the population with a basic level of security,” he stresses, “We’re still not there in so many areas.

That’s the advantage you get from more troops.”

Of course, any such move would transform the debate over whether to extend Canada’s current mission past February 2009.

This may be the paramount issue for the minority Conservative government in 2008, hanging as it does on conflicting reports of progress in Afghanistan, and the Canadian public’s dwindling confidence that their troops are making a difference. A U.S. surge would instantly ease those pressures, says Elinor Sloan, a security expert at Carleton University in Ottawa. It would also give the government a difficult choice to make. Should Canada stick to its current mission, knowing it has the support of American firepower?

Or should it take advantage of the surge to

make a partial exit from the hot zone, and take a badly needed breather?

Sloan favours the latter option. “Even if the U.S. doesn’t increase its commitment, I think Canada should draw down its forces— maybe to something like 800—and then come back with greater strength in a couple of years,” she says. That would open a much-needed window for Canada to replenish its ranks with recruits, acquire new equipment and make an even stronger commitment to Afghan reconstruction, Sloan explains. “I strongly believe that Afghanistan is a place where Canada should be. Go right back to square one as to why the terrorists were able to attack on 9/11. [Afghanistan] is a security threat in my view. In some ways it’s not politically correct to say any longer that there is a link between the terrorist attacks on the United States and Afghanistan. But you need to stabilize that country, and there’s an important humanitarian aspect to doing that. I think it makes a difference for the Canadian Forces to be there.”

Not everyone, however, sees great benefit in a massive influx of American Gis. Sean Maloney, a military historian at the Royal Military College in Kingston, Ont., who has toured extensively with Canadian troops in Kandahar (Maclean’s has published several of his first-hand accounts), cautions against creating a fortress-like atmosphere in the country. “This whole idea that the media is perpetuating that the country is about to collapse to the Taliban is wrong,” he says. “There has been an increase in activity in a few key areas, but it’s not preventing most of the development work from getting done. We’re there to build capacity, and to shield their redevelopment effort. If we flood the country with soldiers, that’s going to send the wrong message.”

Maloney sees benefit only in a limited increase in specific types of units from the United States. One is special operations squads, whom he says represent the best weapon against Taliban insurgents using remote villages and the rugged Pakistan borderlands as cover. Another is so-called “omelets,” or “operational mentoring and liaison teams,” which would help train Afghan soldiers and officers as part of a long-term stabilization effort. Still, Canadian soldiers are bound to welcome whatever support happens to come their way. With little in the way of infrastructure and social institutions, stabilizing Afghanistan is clearly a challenge to be measured in years. It’s already been five since the U.S. took its eye off the land where the Sept, ll plot was hatched, and turned its attention on Iraq. At this stage, it hardly seems unreasonable to expect a bit of backup. M 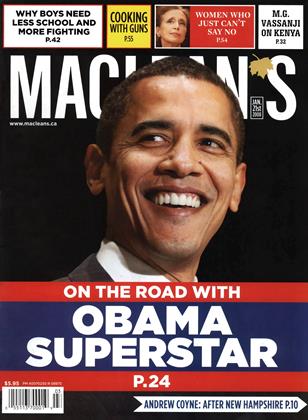