AS A GRADE 10 STUDENT, I am aware that I need to start thinking about my university choices; I picked up a lot of useful information while I was reading your 18th annual ranking of Canadian universities (University Rankings, Nov. 24). That being said, what about students, like myself, who are considering attending a university overseas? You are doing an excellent job of providing information on Canadian universities, but I think you should include some American and overseas schools as well.

SANDY FARRAN’S ARTICLE painted parents as “the biggest obstacle” when students are considering enrolling in a community college program as an alternative to university life (“Consider the college alternative”). I would suggest that the mainstream media has done little to highlight the benefits and significant career opportunities for students who complete a college education. My husband and I, both university and college graduates, have gone on to have fulfilling careers. We encourage our teenagers to keep their minds open when thinking about post-secondary education and not rule out the many opportunities that lie inside the doors of a community college. Why not run a similar edition of your magazine with a focus on community colleges? Marlene Chumak, Brampton, Ont.

profit, secular, private university (“Noble Quest”). The story was largely accurate, but missed a few elements. The tuition level of $24,500 is offset very significantly in the business plan by a substantial scholarship component. This makes Quest much more affordable than it appears. Enrolment has been less than hoped for, but it is growing steadily. At 80 per cent, the conversion rate of students from first year to second year is far above the norm in most universities. As the article observes, the faculty, staff, students, parents and the new management are incredibly committed and dedicated to this unique institution. D.W. Strangway, Founder, Past President and Past Chancellor, Quest University Canada, Kelowna, B.C.

I WAS SURPRISED that Scouting wasn’t mentioned in your article about how extracurricular efforts can strengthen a job application (“Resume builders”). Randy Pausch, in his book The Last Lecture, mentions that he almost earned the level of “Eagle Scout” (or the “Chief Scout Award” here in Canada), and regretted not getting it. He points out that the Eagle Scout is one of the only things you can accomplish at age 15 that can still legitimately be put on a job application when you’re 30. During my career, I often had occasion to review job applications. Any that had “Chief Scout Award recipient” listed automatically made it through the first scan to receive additional consideration. They were always good candidates, and good people. John Barker, Sarnia, Ont.

WHENEVER you put out the University Rankings issue, inevitably, you have a young, beautiful Caucasian woman on the front. What does this project? That university students must be young, beautiful Caucasian women. That sex sells. That we are not a multicultural country. That males, people of colour and minorities, as well as the aged population, don’t have as much legitimacy. But, surely, the latter groups make up the majority of the student population. Why not represent them? This is not about political correctness—it’s about demographic accuracy.

I’M NOT THE LEAST bit surprised that students at universities are unprepared, lacking basic math skills and, in some cases, scoring

at a Grade 6 level or lower on math placement tests (“Ready or not”). I taught until 1994, and I did not allow my math students to use calculators because, if they did, they wouldn’t understand the concept of the problem they were solving. I observed students outside of my class who used calculators all the time. I noticed that although they could punch in the figures and then hit the sine, cosine or tangent buttons, they really did not understand the functions. They scraped through their exams but did not master the information.

PUT DOWN THE GADGETS

THANK YOU so much for Lianne George’s article about the adverse affects of technology on our kids’ brains (“Dumbed down,” Education, Nov. 17). I have two teenagers and it seems inevitable that they will be affected by this to some degree. Fortunately for us, we have been lucky to keep them interested and involved in a lot of extracurricular sports and outside activities. They are currently annoyed at me for, amongst other parental intrusions, making them read George’s article and write, by hand, an essay on how these issues apply to their lives. I want them to understand that technology is a tool—it is

not life. Hopefully this article will help to start reorienting our kids’ attention to real life in time for them to enjoy it and in time for us all to benefit.

THIS STORY HIGHLIGHTS the concerns that many of my fellow teachers and I share about the positive and negative impacts of technology on learning. The Web and computers are fabulous tools for society and educators, but they are tools, not substitutes for deep, reasoned thought. You mention Don Tapscott in your story, who, in his book Grown Up Digital: How the Net Generation is Changing Your World, sees technology as developing new ways of finding, synthesizing and communicating information. Finding, yes; new ways of communicating, probably; but synthesizing—no! People synthesize ideas; machines don’t. Intelligence is far more than the regurgitation of facts. Intelligence involves the ability to analyze, synthesize, hypothesize and apply knowledge. Many students in this generation have difficulty classifying information, making inferences, summarizing and, especially, synthesizing ideas into a cohesive whole. To do this requires attentive interaction with sources and deep reflection, which is the antithesis of the “continu-

ous partial attention” we see every day in our classrooms. Possible solutions? For educators: keep teaching critical thinking skills. For students: put aside the gadgets for a while and pay attention.

ANDREW COYNE is on to something with his suggestions for electoral reform (“A tinpot Parliament voted in by a tiny minority,” Opinion, Nov. 24). It’s probably not a stretch to argue future voter turnout will continue to decline until or unless something along the lines of his suggestions is implemented, whether it’s holding weekly debates, abolishing taxpayer funding of campaigns, or making voting mandatory. The time for talk is up, though; voter turnout has been steadily dwindling, and with it, credibility in the system. It matters less what action is chosen as long as something is done to address the malaise.

SURELY ANDREW COYNE would not inflict upon us the insult of “regular debates, one a week at least” of the kind we suffered during the last election? Debates, yes, but ones that would follow rules of order for debate and would rigorously enforce respectful exchanges instead of the back alley brawls we have seen that only suit the bullies.

COYNE CALLS making voting compulsory, like the Australians have done, a “ crude but

effective remedy.” Under the Australian system, voting is simply another of the duties or obligations of citizenship. It results in a much fairer representation than we have in Canada with our first-past-the-post system. Under the Australian system, every citizen has to make a choice, and that choice can be for the candidates in preferential order or for none of the candidates—all democratic options are covered. Penalties for not voting are not cheap and are sufficient to create an interest among the electorate in the process and in the result. I hardly think that this is “crude,” particularly when compared to the Canadian methodology.

COMPLAINTS ABOUT the evils of the Canadian parliamentary system and its first-pastthe-post elections are the sort of things that crop up after every federal election. The real problem with our current system is that we have too many parties for effective legislation. The fringes have too much power and the entire country is always held hostage by the whims of a single region interested only in itself. Low voter turnout is also not a problem. It ensures that Parliament is elected by those who care. To force a lot of spoiled ballots serves no one. As Yogi Berra succinctly

observed, “If the fans don’t come out to the ballpark, you can’t stop them.”

AS I SIT HERE in my home in Santiago, Chile, doing yet another Spanish homework assignment, I am intrigued by Jason Kirby’s article on cracking the universal translation device (“The quest for better understanding,” Technology, Nov. 3). My family and I have been in Chile for one year now, and while we have learned plenty of Spanish with various teachers, books and courses, an electronic translator will never be enough to learn the intricacies of this beautiful language. The history of Chilean Spanish is difficult enough to learn (and is very different from other Spanish, say Peruvian or Costa Rican) from a local, as the history of the words go back to the Mapuche people and that group is long gone. As in English, the Chileans have many slang words or meanings that are not in any dictionary, nor are they translatable. All the same, kudos to the developers for trying to create a device that could actually decode a language. If it makes a difference for some people, that is a good thing. 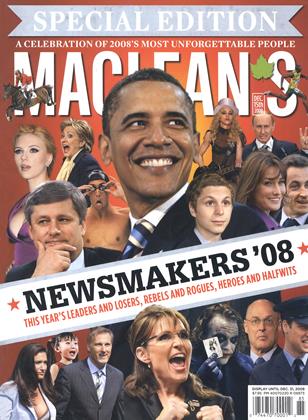