‘Why would you print a letter that compares Justin Trudeau to Barack Obama?’ December 29 2008

YOU HIT the nail on the head in your assessment of the “Big Three” companies (“The decline of the North American car,” Business, Dec. l). While the quality control prophet W.E. Deming was helping to revolutionize the Japanese auto industry in the late 1940s, domestic auto companies rebuffed his talk of continuous improvement and quality through leadership and workmanship. While he has been regarded as a hero in Japan for the past 50 years, it wasn’t until the 1980s that Detroit came calling—and the race had long been lost by that time. The hubris and navel-gazing of the Big Three is most evident in their passion for impotent designs and vehicles devoid of entertainment value (post19908 Cadillacs and Corvettes excepted). As a car guy, this incompetence angers me because there is no reason that we couldn’t “do it here,” like the Japanese or Germans. Collin Sawatzky, Kelowna, B.C.

ENOUGH ALREADY! Haven’t we pumped enough money into the auto industry in the past for bailouts that only lace the pockets of the rich? This sort of corporate welfare has to stop. Who wins in the long run? It’s a joke to bail out a cash cow—an industry that holds countries for ransom with threats of up to

900.000 employees out of work. The only thing those employees will have to lose is the big salary they were overpaid with in the first place. I predict that without the government making the same mistake by providing more corporate welfare, most of that estimated

900.000 unemployed will find work and be better prepared for their future.

I’VE READ WITH interest your special report on the decline and crash of the auto industry in North America. I believe that big auto has been its own worst enemy and, as a result, I do not support a taxpayer bailout of the industry. If anyone is to bail out big auto then it should be someone with an aligned interest and a lot of money, like big oil.

THANK YOU for Andrew Coyne’s crisp description of the damage that subsidies have done to the North American auto industry (“The real reason a Big Three bailout is a bad idea,” Opinion, Dec. l). But we

North Americans voted for the inefficient production of inefficient vehicles with our wallets. While Europeans consumed less fuel and produced fewer greenhouse emissions by driving smaller vehicles, we traded our cars in for SUVs, pickups or minivans until gas prices finally rendered them costprohibitive. Europeans enjoy excellent performance in their vehicles through advanced small-engine technologies like hybrid drives, clean diesel, direct injection and turbocharging. European manufacturers don’t even make some of these engines available here. We’re shortsighted and stuck in our ways.

By and large, we’ve asked for what our auto industry has delivered.

SAY WHAT YOU MEAN

I READ WITH great sadness “Using the right words for the right reason” (From the Editors, Dec. l). The murder of l6-year-old Aqsa Parvez was an honour killing, and feminists do their sisters a great disservice by trying to pretend it was run-of-the-mill family violence. As a woman who has worked for the last 40 years to help prevent violence against women and children, I am appalled that the federal government is not asking certain patriarchal immigrant groups to abide by Canada’s Charter of Rights and Freedoms, which guarantees equality to women. Hobbled by political correctness, politicians prefer to look the other way, resulting in the slow but steady spread of misogynistic prac-

tices that affect not only Canada but also Europe. The hijab is a symbol of female subjugation, and in Canada the sad death of Aqsa Parvez underlines this truth. In the meantime, it is the duty of mainstream citizens and the media (thank God for Maclean’s]) to stand firm against the false charges of racism, and to speak out against the growing spread of misogyny in its many subtle and ugly forms.

SURELY IT IS about time we agreed that characterizing the native inhabitants of North America as savages is, and always was, inappropriate. These “savages” skillfully enabled explorers to both survive and make a fortune in the fiar trade—a fortune that helped finance the endless tribal wars of Europe. As stated in your editorial, “there was plenty of savagery to go around back then.”

THIS IS FOR A GOOD CAUSE

THE NAME Justin Trudeau makes me sick. Why would you print a letter to the editor that would compare him to Barack Obama? It is very obvious who you vote for. For the record, if Andrew Coyne and Paul Wells are so f-king smart then why don’t they run the country? I’m sure both of them foresaw this global meltdown and are now independently wealthy. One day it will be known that Stephen Harper was one of the best prime ministers that Canada ever had. I’ll give you $5,000 or donate this amount to any charity of your choice if you print this letter in its entirety. Have a wonderful day.

THE IDEA OF merging the NDP with the Liberals is even more disastrous than Andrew Potter thinks (“Forget big tent: unite the left is more like big top,” Opinion, Dec. l). There is nothing left-wing about the Liberals. It is a party that flows with the political wind. The Liberals are crying foul because the NDP regained its traditional base. The Liberals were unprepared for a reunited right and an ascending Green party. A merger would mean the NDP would be under the thumb of the Liberals. If the Liberals want progressive votes, they should earn them.

THE SECRET TO SUCCESS

MALCOLM GLADWELL’S book excerpt on how human excellence is achieved was fascinating (“How to be a success,” Society, Dec. l). Given the understanding that the mastery of a complex task requires time, practice, opportunity and parental support (something many parents intuitively understand), it is nothing short of astounding that our society continues to saddle our children with enormous loads of daily homework, all the while defending this unfounded practice as “good for them.” If we want our kids to succeed, we need to allow them to discover their passions and give them the time and encouragement to find what really matters to them.

THE CLAIM THAT “Net geners” are “deeply self-obsessed, needy, ambitious, impatient and undisciplined” is unfair (“Is this the future? Don’t bet on it,” Business, Dec. l). Let’s compare the faults of those born after 198O (“Net geners” or NGs) to those born before 1980 (“Old Farts” or OFs). NGs try to recycle in big cities like Calgary, run by OFs who have yet to see the need to develop curbside recycling. NGs wake up late, but show up to work on foot or by bicycle, braving road systems built by OFs that are dangerous for cyclists and crowded with OFs commuting alone in their SUVs. The legacy the OFs will leave the NGs is that of debt, pollution, waste, mismanagement and an economy built on unsustainable values, both social and environmental.

WHAT A SPOT-ON article! As a teacher at a private “college preparatory” school in Florida, I see the rampant narcissism Steve Maich is referring to every day. It has now become

William Gibson, 94, playwright. Best known for The Miracle Worker, a biography of the young deaf-mute Helen Keller, he wrote more than a dozen plays, including the Broadway hit Two for the Seesaw.

Jern Utzon, 90, architect. Often cited with Frank Lloyd Wright and Alvar Aalto as one of the 20th century’s iconic architects, he was best known for designing Australia’s Sydney Opera House in 1957He quit the project mid-construction in 1966 over cost and design detail disputes. The structure was not completed until 1973-

multi-generational. The parents of these kids, many of whom were spoiled themselves and who generally are shielded from the current economic downturn, simply live in a fantasy land. My children attend public school and the expectation gap is vast. They have standardized tests and work for their grades. There is little of that in private education. I get irri-

tated when the words “talent” and “creativity” get thrown around as if years of practice and hard work don’t contribute to success in a competitive field. I am going to make a copy of your article available to our administration. They won’t get it, but it’ll give me some latent passive-aggressive satisfaction!

I WAS DISCOURAGED there was no mention of the South Vancouver Birth Program in your article “A midwife crisis” (Health, Dec. l). I have served on its advisory committee since its inception and have been thrilled and amazed with its inclusiveness and success. We offer the most comprehensive program for expecting mothers that is available in Canada and assist some 350 mothers each year with their birth process. Please give praise where it is warranted.

YOUR PHOTO OF the three women gagged with pink ribbons struck a resounding chord with me (“The angry breast cancer survivors,” Books, Dec. l). If I had the money, I would reproduce this photo on billboards all over North America! As a four-year survivor of breast cancer who still can’t return to work, I recently had the experience of being laughed at by an otherwise very compassionate anesthesiologist at a pain clinic when I used the word “chemobrain.” It is not just the desire to hear upbeat stories that creates the “cone of silence”; the heavy funding of research, information and support groups by drug companies is partly to blame. Our free monthly breast cancer newsletter in B.C. is funded by

11 drug companies. What incentive is there to publish comments highlighting the serious side effects of cancer drugs?

JUST READ Anne Kingston’s story on postcancer anger and don’t know what to say except: finally! Hallelujah! Since 1996,1

have been dealing with the aftermath of non-Hodgkin’s lymphoma. In many ways I’m “fine” and I am grateful to be alive. But I have found living after the cure much harder than living with the disease. There’s fatigue, “chemobrain,” joint pain, mouth sores. There are strange reactions to drugs that used to be easy for me to take. The hardest thing is that it’s not taken seriously by the medical profession. For every Lance Armstrong, there are a lot of ordinary folks whose post-cancer stories are not so glamorous, exciting or successful. It is time for a new branch of medicine to be formed, one dedicated to helping survivors cope with the years after cancer.

MACLEAN’S BESTSELLERS LIST Will return to our magazine pages next week. To check out this week’s list, please visit macleans.ca/bestsellers 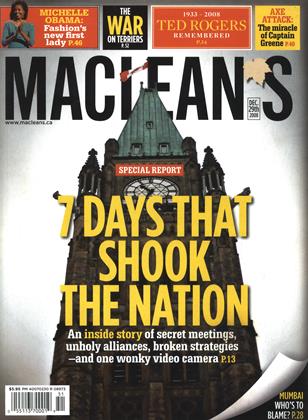