Eugene Melnyk’s star turn came in 2006 when he sat down with the producers of TV newsmagazine 60 Minutes and spun an elaborate tale of intrigue and stock manipulation. The founder and former CEO of Biovail described how powerful Wall Street hedge funds, short sellers and analysts on the take were in cahoots to destroy Canada’s largest publicly traded pharmaceutical company. “When you’ve got these companies, these people out there trying to bring you down,” he told the camera, “we’re lucky we survived.”

Part wounded victim, part scrappy underdog, Melnyk carried the role well. And coming on the heels of Biovail’s massive US$4.6billion lawsuit against this shadowy cabal, his stint on national TV was the most highprofile volley from an executive known for shouting down his critics. But two years later, the episode can be seen in a different light— as a last, desperate bid by Melnyk to shape his legacy at Biovail before regulators, class action lawyers and the U.S. government did it for him.

Earlier this month, the U.S. Attorney’s office in Boston contributed the latest, and potentially most damning, chapter in the Biovail saga. The company said prosecutors have launched a grand jury investigation into payments it made to doctors who prescribed a new heart drug in 2003. Criminal charges are a very real possibility. For Biovail’s shell-shocked investors, this is just the

latest in a long line of setbacks and embarrassments. Over the last few years there have been class action lawsuits, investigations by market regulators in Canada and the U.S., and delays in getting new drugs approved. Biovail’s share price, which Melnyk once went to such great lengths to defend, has fallen to levels not seen in nearly a decade.

At this point no one knows exactly what evidence U.S. officials have gathered against Biovail, or even what any ensuing charges might look like. (The company has said it will co-operate with the investigation.) Grand juries are creatures of mystery, a way for prosecutors to determine behind closed doors whether there’s enough evidence to go to trial. But we do know a fair bit about the controversial program at the heart of the investigation, and it all suggests the bad news at Biovail might get worse before it gets better.

For a long time Biovail was a forgettable little generic drug company, cranking out cheap versions of other company’s medicines. But starting in 2002, Melnyk sought to transform the company into a serious pharmaceutical player with a portfolio of its own lucrative medicines. Using its controlledrelease technology, which allows patients to pop just one pill over a whole day, as opposed to taking several doses, the company developed new versions of existing drugs and was poised to bring them to market. First up was a drug that analysts and investors were sure would be a home run: Cardizem LA, a treatment for hypertension. Indeed, Biovail trumpeted its new 600-strong sales force and the success it was having marketing the drug to doctors. Few gave much thought to a seemingly insignificant and oddly named little initiative called Proving LA through Clinical Experience, or PLACE.

Investors learned about it soon enough. In the summer of 2003, a few months after the program’s launch, the Wall Street Journal and Barron’s reported that Biovail was paying millions of dollars to doctors to prescribe its new drug. Under the PLACE program, Biovail paid as many as 17,000 doctors up to US$1,000 each, provided they put 10 to 15 new patients on the heart drug. Doctors’ assistants who chipped in to help would get another $150 each.

The news set off alarm bells in the medical community. Dollars-for-prescription schemes are widely panned as unethical, not to mention the fact they hover at the fuzzy edge of the law. There are times when drug companies do enlist doctors to assist them with clinical research, and in return pay for their services. But the end goal must be a genuine

quest for scientific knowledge. “The aim has to be to eventually publish the results,” says Dr. Jerome Kassirer, a professor at Tufts University School of Medicine and former editor of the New EnglandJournal of Medicine. “The rest is just marketing.”

By the fall of2003, the office of the inspector general at the U.S. Department of Health and Human Services launched an investigation. It became the basis for this month’s grand jury probe.

Biovail fired back, the way it often did, by denying any wrongdoing. The company insists PLACE was a legitimate clinical program, because physicians were asked to send patient data back to the company which would be used for research. And the two damning newspaper stories would later feature in Biovail’s massive lawsuit as evidence that hedge funds were manipulating the media as part of a smear campaign. But the news raised another troubling question for investors: was this a sign Biovail’s flagship drug was in trouble?

The Ontario Teachers’ Pension Plan board thought so. In a class action lawsuit, the powerful pension manager alleged the PLACE program was little more than a sham. According to the suit, Biovail was having serious problems manufacturing enough Cardizem LA. But by encouraging doctors to fill out thousands of prescriptions, the company made it seem like the Cardizem LA launch was a success. When the gaping hole in its revenues finally grew too deep to mask, the lawsuit alleged, Biovail blamed the shortfall on a now-infamous truck crash. The company said a serious accident involving one of its trucks would delay revenues, even though some witnesses suggested the rig was largely empty at the time of the accident.

Last month, Biovail settled the class action suit. It agreed to pay investors US$138 million, while admitting no wrongdoing. Biovail declined to comment for this story, but the company’s credibility remains a hot topic for investors. Last year, Melnyk was forced to pay $1 million to the Ontario Securities Commission over stock trading and disclosure violations. Meanwhile, the U.S. Securities and Exchange Commission is continuing its investigation into the company’s accounting practices. But by far the biggest concern for Biovail is the criminal investigation.

With the long arm of Uncle Sam now knocking at the door, Biovail has two options—fight, or get out the white flag. Faced with the same choice a few years back, Conrad Black opted for all-out war, and next month he will likely be sitting in a Florida prison cell.

That leaves the white flag. In fact, American legal experts explain, the document prosecutors sent to Biovail informing it of the grand

jury investigation is sometimes referred to in legal circles as a “come to Jesus” letter. In other words, “Come and confess your sins, and we won’t throw the book at you.” Biovail now has one shot to make its argument to prosecutors, in hopes they might drop the case.

That might help explain why Melnyk has taken a far more conciliatory approach in his legal battles of late. Where Black fought efforts to oust him, Melnyk quickly vacated the top job at Biovail in 2004, making way for CEO Douglas Squires. And while Black railed against “corporate governance zealots,” Melnyk, who took home a $l22-million pay packet in 2001, became a champion of good governance. In his position as chairman he did much to boost Biovail’s score on annual governance rankings—hiring a compensation expert

and appointing independent directors, for example. (He gave up that job last June as part of his settlement with the OSC.) Nor will Melnyk ever lose any sleep over the colour of his passport—despite living in Barbados, Melnyk is still a Canadian citizen, and, for good measure, just happens to own a pro

hockey team in the nation’s capital.

To be sure—the cases have their differences. The Hollinger matter involved payments directly to insiders, whereas the Biovail matter deals with its sales practices. But the U.S. Attorney’s office in Boston is known for aggressively going after drug kickback schemes. Prosecutors there have chalked up several high-profile victories that involved fines reaching into the tens, and sometimes hundreds of millions of dollars. For instance, in 2004 Warner-Lambert paid US$430 million to settle charges it made illegal payments to physicians, and the next year Swiss drug maker Serono paid US$704 million. Oftentimes former employees who acted as whistle-blowers walked away with millions of dollars in reward money.

In the case of Serono, prosecutors in Boston also charged four executives with bribing doctors. A jury acquitted all four last year. Yet that’s surely cold comfort after being dragged through the U.S. legal system.

Analysts and legal experts all agree Biovail will quickly try to settle before things go anywhere near that far. Since becoming CEO, Squires has strived to put Biovail’s legal troubles in the past and get back to business. Analysts are hopeful that will happen soon. “Once you resolve those issues, the stock will go up because you don’t have the overhang anymore,” says Claude Camire, an analyst with Paradigm Capital. “This has been going on for three or four years.”

But even if there is a settlement, prosecutors will want their pound of flesh. In settlements involving civil lawsuits, defendants are rarely required to admit any wrongdoing. Not so in criminal investigations. And that could put a dent in Melnyk’s massive lawsuit against hedge funds and short sellers. ‘If they enter into a settlement, there will have to be some admission of wrongdoing. Prosecutors won’t take anything less,” says Peter Henning, a professor of law at Wayne State University. “That would have a negative impact on their lawsuit.”

Cracks are already starting to show in Biovail’s conspiracy-laden lawsuit. Melnyk once described the research done by one analyst and defendant as “outrageous and irresponsible.” Yet last fall Biovail dropped its case against that analyst, David Maris, formerly of Banc of America Securities, completely releasing him from any further claims. At the time, Biovail implied that Maris’s testimony would be “extremely helpful” in its ongoing fight against the hedge funds. But Maris shot back, saying he is in no way co-operating with Biovail. Even if the company forced him to testify, he said he was “unaware of any conspiracy against Biovail and do not believe any such conspiracy ever existed.” M 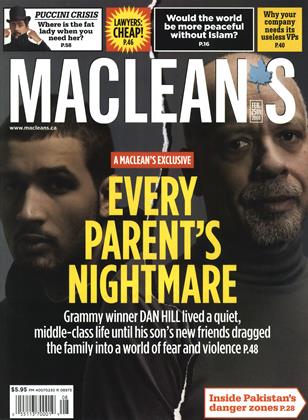