UOVE GRIME SCENE DO NOT CROSS

On July 29,2007, nine days after their wedding, two Calgary police constables, Jim McManus and Corina McCarthy, awoke before sunrise, she to ready herself for work and Jim, using a method as odd as his courtship of Corina, to end the marriage. Already, over the course of a volatile two-year relationship, the couple had suffered three failed engagements, two discarded diamond rings and the ungluing of an ersatz wedding ceremony in Las Vegas. Now, with Jim’s gambit, they would be headed for divorce, and one of the oddest court rulings in recent Canadian legal history.

That morning, as was her custom—“which,” as she later said of Jim in an affidavit, “was well-known to the plaintiff”—Corina prepared for her shower by removing the engage-

ment ring Jim had given her just over a month prior and placing it on the bathroom counter. The ring in question was custom-made according to her taste, with a central .91-carat diamond above two rows of 24 smaller stones in an 18-carat white gold band. It weighed just shy of 10 grams and had cost, according to an appraisal letter eventually filed as Exhibit A with the Court of Queen’s Bench of Alberta, a little over $14,000.

In the midst of her ablutions, Corina saw Jim, muttering that he needed deodorant, enter the bathroom, put the engagement ring in his pocket and replace it on the counter with his own wedding band. Within minutes, and with Corina scrambling from the shower demanding back the ring (the episode devolved into a minor scuffle), Jim had left the home, effectively ending the union. By October the couple was divorced. All that was left to resolve was this matter of the ring, which Jim continued to keep and Corina to covet.

“This is a dispute between spouses over the status of an engagement ring,” begins Madam Justice C.L. Kenny in her written reasons for judgment, handed down late last year. In any other instance, Kenny might have had little

trouble awarding the ring to Corina, since such gifts are not considered part of matrimonial property and are therefore unavailable for redistribution upon divorce. Here, however, Kenny was presented with an odd set of circumstances—which would eventually lead her to veer from legal tradition. “The husband,” Kenny writes, elucidating the trouble, “says that the ring was a conditional gift and that the condition not having been satisfied is to be returned to him.” As with most legal decisions, Kenny’s language glides scalpel-like above most every human detail. Though Jim’s and Corina’s accounts of their relationship diverge, “the differences can be attributed,” Kenny writes, “primarily to differences in perception.”

You can say that again. Indeed, the depth of the bitterness between Jim and Corina can be measured by just how far each went to keep the ring from the other—Jim with his sleight-of-hand routine in the bathroom, Corina with her lawsuit. Given the costs, skirmishes over engagements rings, though not unheard of, rarely go to trial. “Most rings, the values that you’re looking at are probably under $20,000,” says Calgary lawyer

Wayne Barkauskas. “It will cost you double that to get in front of a judge. Why would anyone spend $40,000 to argue over a $20,000 ring?” In a brief interview withMaclean’s, Jim acknowledged these costs but said making the dispute a court matter wasn’t his idea. “I had nothing to do with that—I’m the one who got sued,” he said. (Corina would not speak with Maclean’s and is quoted here exclusively from affidavits.)

When Jim first proposed, on Dec. 23,2005— it would be her second marriage, his third— he marked the occasion in the usual way, giving Corina a diamond ring worth $11,000. “I wore the ring constantly,” says Corina, using the terse language of a police officer, “until I terminated the engagement and returned the ring to the plaintiff.” Within months they had reconciled, and Jim returned the ring. Some weeks later, he and Corina—still technically married to her first husband—went to Las Vegas for a commitment ceremony, “the same in all respects as a marriage ceremony,” she says, “except that it did not result in the plaintiff and I being married.” They soon split, however, and Corina returned the ring to Jim, who subsequently sold it at a loss of nearly $8,000 (according to Corina, both she and Jim later agreed this ring held “bad karma”).

By November 2006, they were together again. Jim arranged for another ring to be made before proposing on Christmas Day. Then he ended the engagement, cancelled his order with the jewellers and paid “the approximate amount of $849-05” in punitive fees. The couple limped on, however, and in May 2007 resolved again to marry. “I made it known at that time that I would marry her, but would not purchase another engagement ring,” says Jim in an affidavit. Corina, however, “insisted that she would not marry me unless I purchased another engagement ring.” (She denies this, saying it mattered little to her whether or not she received a ring.) Jim, according to his sworn account, relented but remained “very clear... that the ring would only be hers as long as we were engaged or married”—a condition he repeated twice more before the wedding. (Corina, for her part, calls the condition a “fabrication.”)

They wed on July 20, 2007Predictably, perhaps, the marriage soon grew fraught. When, on their wedding night, Jim “approached the defendant, she pulled away from me, became rigid and said, ‘We made a mistake.’ ” In Corina’s account, later noted by Justice Kenny, she did not characterize the marriage as a “mistake” but merely asked: “What have we done?” Later, on the couple’s return from a three-day honeymoon—a motorcycle trip through Jasper, Banff and Waterton—Corina suffered a sunburn so

And so it went. Insignificant tiffs developed into a pattern of disaffection. Though they had planned to live at her home, when Jim first arrived, Corina “accused me of trying to ‘take over the house.’ ” Her daughter, meanwhile, who lived with Corina, would not accept the marriage. Despite requests, Corina failed to provide Jim with a key to the home, saying she was too busy. “I did not have any closet space, dresser space, or, for that matter, a spot for my toothbrush,” adds Jim. Replies Corina to the charge: “There was ample space in my home for his belongings, and I purchased a 30-pack of hangers to assist him in the move.”

Finally, late on July 28, when Jim, while

lying in bed, said he wanted more time with her, Corina “remained distant and upset, and turned off the lights and the TV program that I was watching,” he says. “The defendant told me that night that she wanted me out.” Corina, who acknowledged these tensions, nevertheless recalls things differendy. “As the plaintiff well knew,” she says, “I was suffering from severe sunburn pain.” Elsewhere, she maintains she “loved him and more than anything wanted the marriage to work.” Still, the episode in bed that night convinced Jim the marriage was over, and the following day while Corina showered, he stole into the bathroom and plucked away the ring he had given her.

The move precipitated a police chase, albeit on a small scale. With Corina on his tail, Jim headed for the front door, where Corina saw his suitcase placed at the ready next to his shoes. As he departed, Jim says in his affidavit, Corina appeared with the gold band he’d left behind, throwing it in his direction. Later, she telephoned, demanding back the engagement ring. When Jim refused, Corina told him she had alerted police to the situation. The next day, Jim asked her to meet him at a Tim Hortons. “His evidence is that he wanted to discuss a reconciliation,” Kenny writes. “We each purchased a coffee, and then sat down together,” says Jim. “The defendant started fumbling with her cellphone, and then put it on the table. She asked if I was going to give the ring back.” Jim would not and said so—and Corina left.

Eventually, Corina’s court application for its return drove Jim to hand the ring over to the Allied Civil Enforcement Agency Inc., a bailiff’s services outfit. He and Corina, meanwhile, divorced, then prepared for their day in court. Asked at trial why Corina had pursued the matter, Kenny writes, “her evidence was that her husband had told her that he loved her and was totally committed to her and that she wanted the ring as a reminder ofthat.”

Kenny didn’t buy it. Noting that, according to her testimony, Corina had initially not been interested in acquiring a new ring, Kenny went on to recount instances of Corina’s apparent desire for the ring and concurrent disinterest in the marriage—from scrambling from the shower to calling police. “That is unusual behaviour for someone who was not interested in the ring and did not care if she had one or not,” wrote Kenny, who ultimately upheld Jim’s view of the gift as conditional upon the marriage’s continuing.

“It’s just a thorn in my side, that’s about it,” Jim told Maclean’s of the debacle. “It’s dealt with, it’s over and done with.” He and Corina appear done too, despite a history of reconciliation. He still sees her—“through work, yeah,” he says, “but nothing of consequence.” Not long ago, he retrieved his engagement ring from the bailiff’s office and put it on consignment at a downtown Calgary wholesale jeweller. “Good deal,” said Jim. “It’s still got the new diamond smell. So if you want to buy it—you can have her.” M

AT THE COMMITMENT CEREMONY, SHE WAS STILL TECHNICALLY MARRIED TO HER FIRST HUSBAND 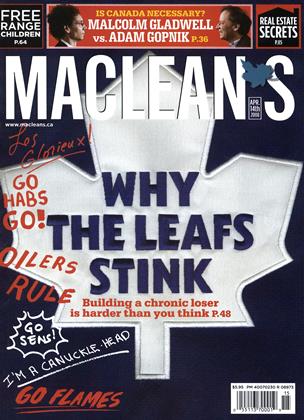