Early in 2007, letters flooded in to the hip-hop magazine XXL about a candid photo circulating online of New Orleans rapper Lil Wayne, a favourite XXL cover subject, and his mentor, Birdman. It showed the two locking lips, and fans burned up the Internet. “Grown men kissing each other on the mouth ain’t gangsta,” declared one G.B. of Cumberland, Md. “Homothuggery at its gayest,” spat Roderick “Rudy” Bankston of Green Bay, Wis. There were those who defended the pair, citing their close father-and-son-type relationship, but most of the community’s reaction was negative— sharply and vulgarly so. Rudy and G.B. just penned some of the more printable barbs.

Hip hop remains one of the few parts of mainstream North American culture where homosexuality is a taboo. There has never been a major, successful gay rapper. If an MC really wants to insult a rival, he finds a colourful way of questioning his sexuality. The community’s hostility to gays is equalled only by that found in pro sports locker rooms and some religions—and churches, at least, are having a conversation about the subject.

Rap’s latest chance to join the dialogue comes with the May 13 release of Terrence Dean’s Hiding in Hip Hop: On the Down Low in the Entertainment Industry—from Music to Hollywood (Simon & Schuster). A gay black man, Dean spent most of his career as an entertainment executive—including 14 years with MTV-in the closet. The promotional blurb promises his book will uncover the “prominent gay subculture” in rap, “a world that industry insiders are keenly aware of, but choose to ignore,” as Dean recounts his romantic entanglements with Hollywood and hip-hop A-listers and ventures into “an

underground world of... sex parties, and love-starved celebrities.” While he won’t name names, the hype suggests readers will be given enough details to make educated guesses about the identities of the characters.

In an interview, Dean stresses that the book is first and foremost his story. A product of inner-city Detroit, he lost two brothers and his heroin-addicted prostitute mother to AIDS, and at 13 was sexually abused by a male neighbour. By his senior year in high school, he knew he was gay; then came two decades of careful navigation. “I realized there are so many people in this industry who are, like myself, down-low men,” he says, using a popular euphemism. “We couldn’t say anything. We didn’t want to jeopardize our jobs, our friendships, our relationships with other artists. And I know there are lots of other artists who are dealing with their sexuality. Especially in the black community, it’s not a topic we discuss.”

Except, that is, in the burgeoning hip-hop gossip community, where stars like Kanye West, who are cut from slightly different cloth than the archetypal gangbanger-turned-MC, are the subject of innuendo about their orientation. On rap sites and blogs, anticipation for Dean’s book is predictably high, with people eager for confirmation of rumours about the likes of West or label executive Rus-

sell Simmons, or fresh grist for the mill. Some, like XXL blogger Byron Crawford, doubt Dean has anything of substance to offer. Skeptical of the premise that there’s a hidden gay community within mainstream hip hop, Crawford says that with what he calls rap’s “World Wrestling Federation aspect”—the cartoonishly exaggerated rivalries that inspire songs and sell magazines—MCs looking for perceived weaknesses in their rivals would have made any evidence public by now.

Dean insists that his memoir has been carefully verified by his publisher’s legal team— and his intention isn’t to out people anyhow. His best hope for Hiding in Hip Hop is that it will open up discussion about sexuality in the community. “Hopefully the people who are blind items in the book, or even people who may not be in the book, will say, ‘You know what? Maybe it is time I come out. Maybe it is time we have this dialogue.’ ”

But if hip hop is to have a gay Jackie Robinson figure, it seems doubtful he’ll step into the spotlight willingly. “I think more likely they would be outed,” says Sky Obercam, an editor at the gossip website Bossip.com. Obercam says if Bossip acquired solid evidence about a star’s sexuality—a story from a reliable source, or better, proof on video—they wouldn’t hesitate to post it, and with the proliferation of cellphone cameras, that’s more possible than ever. Dean’s book may not provide proof, but its publication is a sign the arrival of the first mainstream gay rapper is close at hand. M 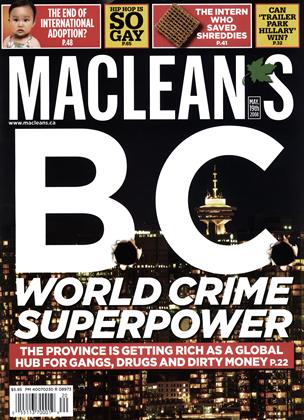