One of the most frustrating challenges confronting anyone hoping to understand the war in Afghanistan is knowing whom to believe when faced with so much conflicting information. Not that there’s any lack of people clamouring for attention. Academics who have never set foot in the country feel no evident shame about writing countless essays in newspapers or posing as experts on Canada’s role in the conflict. Politicians on “fact-finding” missions touch down inside the wire of a protected base, shake hands and smile for photos, and then return to Canada with their previously held opinions unsurprisingly unchanged.

An overarching problem is the transient nature of most Westerners—from aid workers to journalists, diplomats, and, most crucially, soldiers—who spend time in the country. In an interview with Maclean’s last year, Rory Stewart, a former British diplomat who once walked across Afghanistan and now works there, compared the West’s current involvement with 19th-century British colonialism and concluded Queen Victoria’s redcoats were more professional, spending decades in the region, learning local languages and living in remote areas. Today’s tours are comparatively short and sheltered.

It is fortunate, therefore, that Ahmed Rashid has published Descent into Chaos: The United States and the Failure of Nation Building in Pakistan, Afghanistan, and Central Asia. Rashid, a Lahore-based journalist who has covered South and Central Asia for decades, is the author of the seminal 2000 book Taliban— for which he initially struggled to find a publisher, before the Sept. 11,2001, attacks catapulted it into bestseller status and made the text required reading in foreign affairs departments around the world.

Taliban was Rashid’s attempt to warn the world of the dangers brewing in Afghanistan under the control of the Taliban and its al-Qaeda guests. Descent is in many ways a sequel. It too is a warning, angrier and more strident than his first. Rashid’s ire is not the horror of an easily shocked newcomer. It is

born of deep experience. He has covered the region for decades and knows its residents intimately—both the powerful and the overlooked. No one other than Rashid could have written such a book.

“At the time of the [October 2001 Western] invasion, I broke with many of my colleagues by arguing that the war in Afghanistan was a just war and not an imperialist intervention, because only external intervention could save the Afghan people from the Taliban and al-Qaeda and prevent the spread of al-Qaeda ideology,” Rashid relates in Descent’s introduction. As a result, he was disparaged in Pakistan

by Islamic fundamentalists, the liberal left, and the military, which considered his criticism of its interventions in Afghanistan to be traitorous.

Today, almost seven years later, Rashid says Afghanistan is “once again staring down the abyss of state collapse, despite billions of dollars in aid, 45,000 Western troops, and the deaths of thousands of people.” The international community had a window of opportunity in the first few years after the Taliban were overthrown, when Afghans welcomed foreign soldiers and aid workers. They failed to take advantage of it. Troops and resources were inefficient, and too many of both were diverted to Iraq. Instead of building Afghanistan’s infrastructure and civil society and expanding the writ of President Hamid Karzai’s central government, the U.S. spent billions of dollars buying off regional warlords, and reinforcing a parallel, often corrupt power structure that bred grassroots resentment and stifled recovery. The Taliban’s successful raid on Kandahar’s prison last week, freeing hundreds of their jailed comrades, starkly illustrated the ongoing weakness of Afghanistan’s institutions.

When not underfunded, the West’s nationbuilding efforts have often been hamstrung by politically driven restraints on what its soldiers can do. The German provincial reconstruction team (PRT) in Kunduz, for example, is well staffed but ineffective. Its members have little contact with locals and refuse to patrol at night. The “establishment by every European government of ‘national caveats’ stipulating what its PRT force could and could not do was to paralyze NATO’s effectiveness in combating the Taliban,” Rashid writes. To Afghans, he says, these men and women acted more like scared rabbits than soldiers.

What’s at stake in Afghanistan and Pakistan—whose fates, Rashid convincingly argues, are intertwined—is much more than the failure of faraway states and the well-being of the people who live there. In Afghanistan, the future of NATO, the EU, and the UN is on the table. In Pakistan, where a nucleararmed military is unable to kick its habit of sponsoring Islamist extremism, the risks are greater. “The U.S. failure to secure this region may well lead to global terrorism, nuclear proliferation, and a drug epidemic on a scale that we have not yet experienced.” Iraq, Rashid says by way of comparison, may turn out to be a minor sideshow.

istan, where that country’s Inter-Services Intelligence Directorate (ISI) armed and supported the Taliban since its inception and continued to do so after the Sept. 11 attacks, despite the promises of President Pervez Musharraf to the contrary. Rashid confirms that in November 2001, Pakistani planes evacuated hundreds of ISI officers, Taliban commanders, and al-Qaeda personnel from the surrounded Taliban stronghold of Kunduz in northern Afghanistan. The U.S., fearful of alienating Musharraf, allowed the airlift to take place and didn’t monitor who got off the planes when they landed in Pakistan. “It is believed that more foreign terrorists escaped from Kunduz than made their escape later from Tora Bora,” Rashid writes, referring to

Osama bin Laden’s mountain hold-out from which he safely fled in December 2001.

Pakistan’s double-dealings continue, Rashid alleges, and his accusations are supported by a study released this month by the RAND Corp. think tank. It concludes that Pakistan’s ISI and Frontier Corps have failed to root out Afghan insurgent groups in Pakistan, and that individuals in these organizations are actively helping the Taliban. The effects of this failure, the RAND Corp. argues, will be crippling and long-lasting.

Rashid agrees. He says the Taliban will never be defeated in Afghanistan until they are cut off from their support in Pakistan. “You cannot fight the Taliban to death, because at the moment there are three times

TO AFGHANS, WESTERN TROOPS, WITH THEIR MANY RESTRICTIONS, LOOK MORE LIKE SCARED RABBITS

as many Pashtuns in Pakistan as in Afghanistan,” he said in an interview this week with Maclean’s. “You cannot negotiate with them, because their leadership is secure in Pakistan. So you cannot defeat them. No modern guerrilla [movement] has ever been defeated unless its base areas and its freedom of moment have been restricted.” Frustrated, and perhaps looking to score points at home, Afghan President Hamid Karzai this week threatened to send his soldiers into Pakistan to attack Taliban fighters there. It was almost certainly a bluff; Afghanistan’s armed forces are in no position to raid Pakistan. But Karzai is trying to focus the world’s attention on the roots of the insurgency threatening his country.

Rashid blames the United States, and specifically President George W. Bush, for allowing this threat from Pakistan to grow. In November 2001, Bush met with Musharraf to negotiate the terms of the Pakistani president’s support for the war on terror. Musharraf said he feared Washington would abandon Pakistan once it got what it needed for its immediate war efforts. “You tell your people that the President looked you in the eye and told you he would stick with you,” Bush replied.

He has kept his word, at enormous cost. By embracing Musharraf, rather than Pakistan’s people, state institutions, and democratic movement, Bush stoked hatred for the U.S. and caused Pakistanis to conflate democracy, modernization and secular education with America’s support for a dictator. “Pakistan’s middle class was overtaken by feelings of anti-Americanism, making it impossible to persuade Pakistanis to resist the extremists,” Rashid writes. “Neither was it possible to convince people that the struggle against extremism was not just America’s war but equally Pakistan’s.”

Here, Rashid stands out from many analysts, especially in the West, who say that the United States had little choice but to support Musharraf, because the alternatives might be worse. “He has been willing to co-operate with us in the counterterrorism effort in a way that probably few other Pakistanis would,” Ashley Tellis, a senior associate at the Carnegie Endowment for International Peace, told Maclean’s in an interview during Musharraf’s November crackdown on civil society. “Now, he came to this position reluctantly,

and he has performed imperfectly. But when you weigh him relative to many of the alternatives, I think the view of the administration is that it could not get the kind of co-operation we are currently getting, from other leaders in Pakistan.”

Rashid says this attitude underestimates the opposition to Islamist extremism and terrorism among large segments of Pakistani society, even in the North-West Frontier Province and Tribal Areas abutting Afghanistan. He points to the success enjoyed by secular parties there in the February elections as evidence. “I think the Bush administration was totally naive on that issue,” he told Maclean’s. “We’ve had an election. We’ve

got a secular coalition in power, which is beset by many problems, but nevertheless it is a very hopeful sign. If only this terrible nine-year legacy of the subversion of the constitution, the judiciary, the bureaucracy, that Musharraf had carried out had not devastated the country and left this government with this very heavy burden, we wouldn’t be suffering this mess.”

Despite Rashid’s cautious optimism on Pakistan, a reader finishing his book is filled with more despair than hope. The struggle against Islamist extremism will be won or lost in South and Central Asia, but few in the West

seem to recognize what is at stake in the region and are willing to commit the necessary resources to secure it. And any progress made in Afghanistan is undermined by the wellspring of support the Taliban receives in Pakistan.

Still, Rashid, whose affection for Afghanistan and its people is evident in his writing and his speech, isn’t ready to give up on the country. “I still think Afghanistan is doable if the right strategy is applied,” he told Maclean’s. Such a strategy would entail more reconstruction money, more soldiers, and also diplomatic efforts to convince Pakistan to reject the Taliban and other extremist groups. This in turn requires easing regional

tension between Pakistan and its neighbours so that Pakistan no longer feels the need to use the Taliban as a proxy army.

“I don’t think the majority of the Afghan people want to be ruled by the Taliban again,” Rashid says. “Now, they may be very angry with the Americans. They’re angry with Karzai. They’re disillusioned. They expected reconstruction and development, and they didn’t get it. They haven’t been given the infrastructure they’d been promised. There’s no power. There’s litde water. I think the only thing the West really has going for it right now is that they don’t want to be ruled by the Taliban.” M

BY EMBRACING MUSHARRAF, BUT NOT PAKISTAN’S PEOPLE, BUSH STOKED HATRED FOR THE U.S. 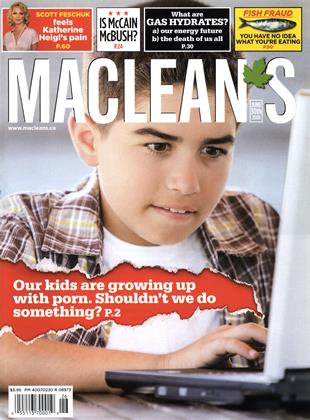