Abandon all hope? Well, not so fast.

Abandon all hope? Well, not so fast. STEVE MAICH September 8 2008

Abandon all hope? Well, not so fast.

A buck can go a long way these days. Don’t believe it? A new car-rental company is offering $1 a day rentals—but there’s a catch. While renting a trendy Mini Cooper from Toronto-based CityFlitz is downright cheap, you have to be comfortable driving a moving billboard with ads for companies like Yahoo and Global Ryan’s Pet Foods all over the cars. Renters must pay for gas and must agree to drive a minimum of 30 km (and they can’t drive outside the Greater Toronto Area). The cars are outfitted with GPS systems in order for the company to provide tracking reports for advertisers on the movement of their brand.

For now, the company is only serving Toronto, with five vehicles in its fleet. There are plans, however, to add Smart cars and to expand to other cities such as Halifax, Montreal, Vancouver, Calgary and Edmonton within two years. Launched in May, the slogan for CityFlitz (which also outfits cars with free WiFi and was started on $1 million in private equity funding) is “One Mini. One day. One buck.” Their target market is the vehicle-challenged young urbanite, as well as companies looking to advertise to 18to 35-year-olds. CityFlitz co-founder, Paul Pelton, says over 1,000 people have pre-registered for access. “We’re looking to break even in the first year,” says Pelton, who also says his goal is to at least

double registered membership in Toronto within the year. He currently has proposals with 10 other companies to advertise on their fleet. Marketing analysts say the company should reach its goals. “They are cheap, they have chosen fun cars that youth like to run around in, and if I was a company wanting to advertise to young-minded people, I would think this is a good thing,” says Keith Thirgood, creative director of Capstone Communications Group. “As long as they advertise their own brand to avoid confusion where their targets are going to hang out, this should be easy for them.” M 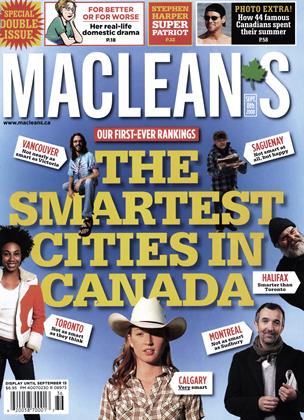