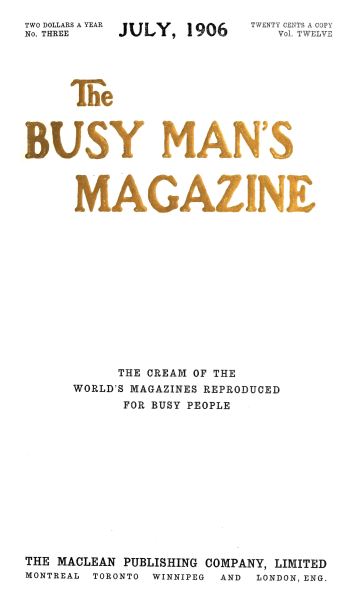 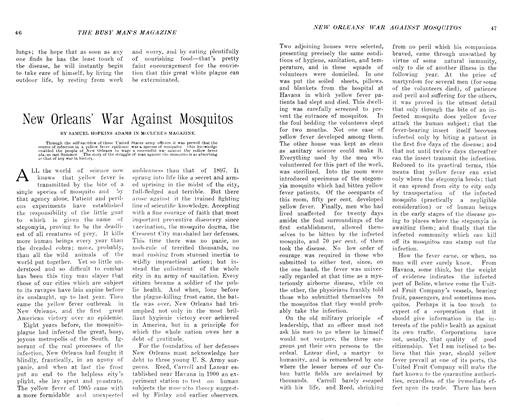 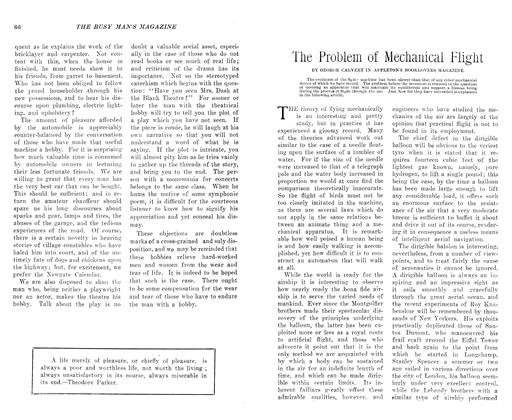 The Problem of Mechanical Flight 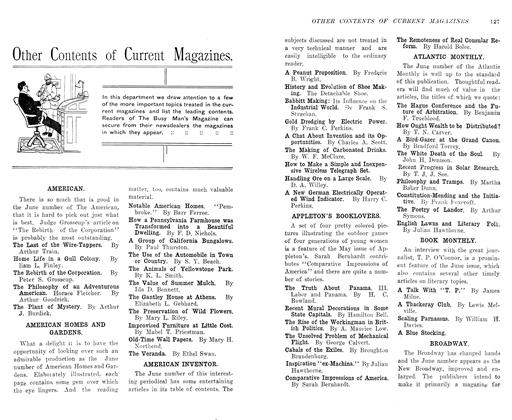 Other Contents of Current Magazines

ALL the world of science now knows that yellow fever is transmitted by the bite of a single species of mosquito and by that agency alone. Patient and perilous experiments have established the responsibility of the little gnat to which is given the name of stegomyia, proving to be the deadliest of all creatures of prey, it kills more human beings every year than the dreaded cobra; more, probably, than all the wild animals of the world put together.

The Problem of Mechanical Flight

THE theory of flying mechanically is an interesting and pretty study, but in practice it has experienced a gloomy record. Many of the theories advanced work out similar to the case of a needle floating upon the surface of a tumbler of water.

Other Contents of Current Magazines

There is so much that is good in the June number of The American, that it is hard to pick out just what is best. Judge Grosscup's article on “The Rebirth of the Corporation” is probably the most outstanding. The Last of the Wire-Tappers. By Arthur Train.

LIKE a page from fiction reads the story of James J. Hill’s rise from obscurity to opulence. “How to become a millionaire, or my progress from a Canadian farm to command of the greatest railroad combination in North America,” would be a very faithful title for the entertaining personal reminiscence furnished by Mr. Hill. By GEORGE C. PORTER13 min

A Mayor of all the People

EVERY morning a carriage drawn by two spirited horses dashes up to the Buffalo City Hall. A man with white hair and beard and wearing a silk hat and frock coat steps out. A newsboy rushes up to hold the door and says: “Good morning, M. N." “Good morning, lad,” says the man. By ISAAC F. MARCOSSON IN WORLD’S WORK11 min

The Brink of Destruction

HE lit another pipe. It was the same pipe. But he had filled it with different tobacco. He returned to his old position, on his back, with his head propped against a mound of grass and studied the western sky. It promised to be a glorious sunset. By JOHN WARNE IN AMERICAN MAGAZINE11 min

The Growth of Christ’s Moral Character

MANIFESTLY the moral and religious consciousness of Jesus was maintained and developed under certain fundamental conditions. No one would maintain that it had no history, that it was a mere dead level of uniformity, even on planes beyond our vision. By W. D. MACKENZIE IN CONTEMPORARY REVIEW10 min

WHAT are the dominating features of the Dreadnought? She will displace nearly 18,-000 tons of water when ready for service, will be propelled by turbines of the Parsons type, with four propellers, will have a trial speed of over 21 knots an hour—equivalent to 25 statute miles—will carry ten 12 in. By POMPEIU IN FORTNIGHTLY REVIEW10 min

The Theories of Horace Fletcher

THERE are several facts in regard to Horace Fletcher’s theories and personal practice which deserve emphasis. In the first place he does not maintain that his ideas are new. He says that Gladstone’s famous “thirty-two chews’’ suggested his first experiments in food nutrition. By ARTHUR GOODRICH IN AMERICAN MAGAZINE10 min
May 11906