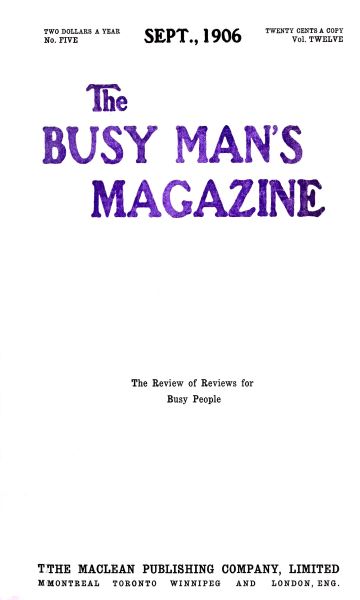 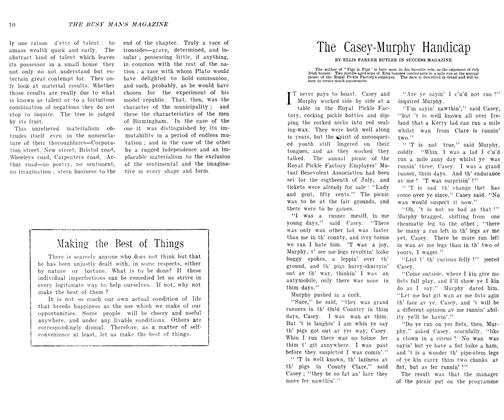 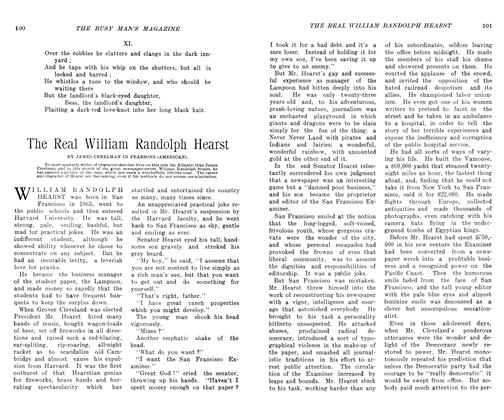 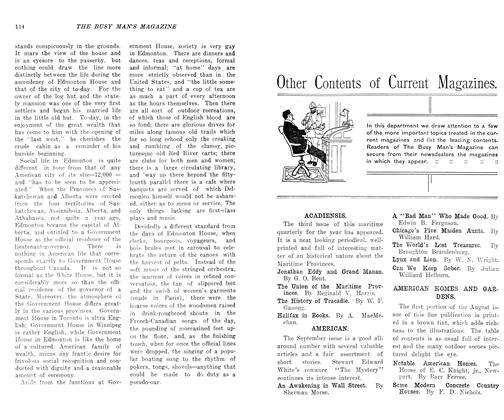 IT never pays to boast. Casey and Murphy worked side by side at a table in the Royal Pickle Factory, corking pickle bottles and dipping the corked necks into red sealing-wax. They were both well along in years, but the spirit of unconquered youth still lingered on their tongues, and as they worked they talked.

WILLIAM RANDOLPH HEARST was born in San Francisco in 1863, went to the public schools and then entered Harvard University. He was tall, strong, pale, smiling, bashful, but mad for practical jokes. He was an indifferent student, although he showed ability whenever he chose to concentrate on any subject.

In this department we draw attention to a few of the more important topics treated in the current magazines and list the leading contents. Readers of The Busy Man’s Magazine can secure from their newsdealers the magazines in which they appear.

3637
ENTERTAINING ARTICLES FOR THE WORKERS

A Mine Owned by the Miners.

IT is not so very long ago that Mr. Russell, the English economist, declared, after careful investigation and consideration, that co-operative institutions must inevitably prove unsuccessful in this country. One of his principal arguments was the impossibility of obtaining supplies, as the influence of the trusts was so great that the dealers were afraid to sell to the independent organizations. By ARTHUR COOK IN TECHNICAL WORLD13 min

9091
DEVELOPMENTS IN SCIENCE AND INVENTION

TIME is far more precious nowadays than it was in the leisurely days of our grandfathers. Labor, too, grows more costly year by year. Proofs of how keenly these facts are appreciated can be seen on every side, but more particularly in the enormous sums which the great corporate bodies who control locomotion and production are willing to lay out with the object of future economies of these two commodities. By CHAMBERS’S JOURNAL12 min

A Visit to the House of Lords

"THE Gilded Chamber !” Gladstone’s descriptive phrase springs at once to the mind. It is glowing in gold and colors. All the glory of the “tiger moth’s deep damasked wings” is seen in its splendid decorations. Yet there is nothing gorgeous in the scene. By MICHAEL MACDONAGH IN THE MONTHLY REVIEW11 min

WHEN the business history of the United States is finally written and the reasons for the phenomenal success of various enterprises are traced out, considerable attention will be given to the rise of young college men. It will be an interesting story. By H. J. HAPGOOD IN WORLD TO-DAY11 min

MOTHER Nature deals out the vegetation of tropical Africa with a lavish hand, and no one need starve in Liberia who is willing to work, but the civilized negro in Africa, at least in Liberia, as I have observed after nearly five years’ residence in the republic, seems to need the encouraging example of and contact with the right kind of white men. By AGNES P. MAHONY IN APPLETON'S MAGAZINE10 min

MR. GOODEL’S desk reflected in its littered disorder, the need of an office boy, and to the end that one should be procured, he had inserted an advertisement in the morningpaper The applicants blocked the corridor, and from the odor and hue of the atmosphere, the majority of them had been smoking cigarettes, a practice which Mr. Goodel abominated. By MONTAGUE GLASS IN McCLURE'S MAGAZINE10 min
August 11906