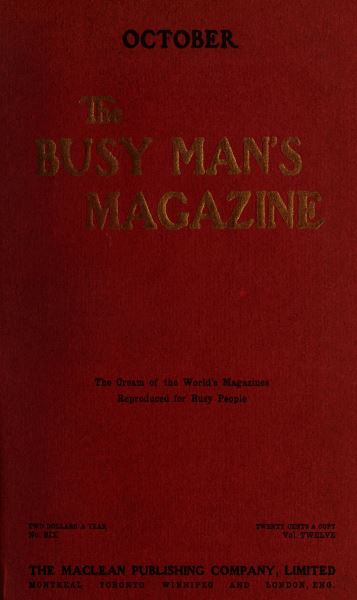 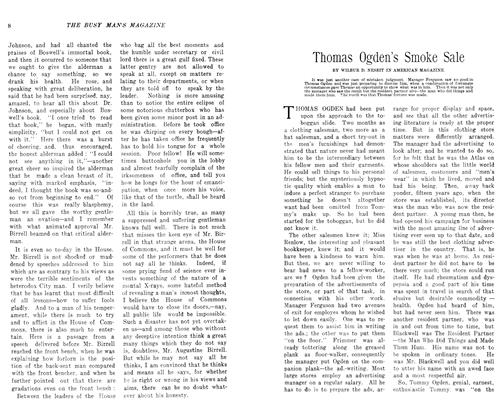 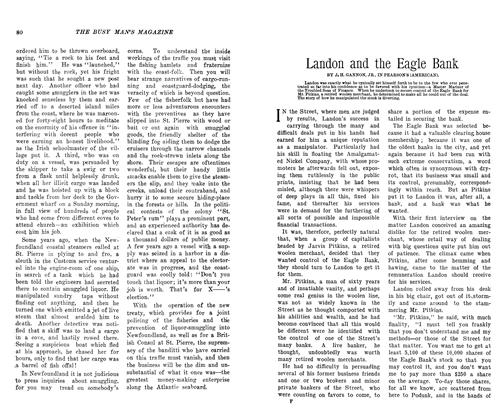 Landon and the Eagle Bank 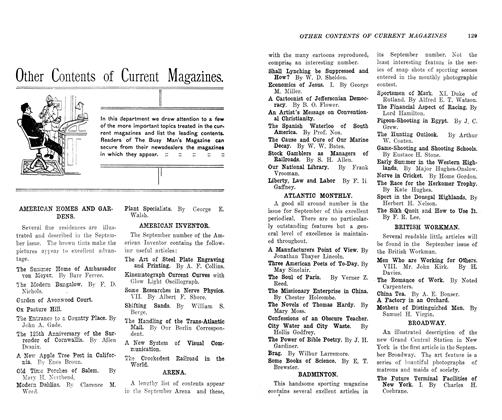 THOMAS OGDEN had been put upon the approach to the toboggan slide. Two months as a clothing salesman, two more as a hat salesman, and a short try-out in the men’s furnishings had demonstrated that nature never had meant him to be the intermediary between his fellow men and their garments.

Landon and the Eagle Bank

IN the Street, where men are judged by results, Landon’s success in carrying through the many and difficult deals put in his hands had earned for him a unique reputation as a manipulator. Particularly had his skill in floating the Amalgamated Nickel Company, with whose promoters he afterwards fell out, exposing them ruthlessly in the public prints, insisting that he had been misled, although there were whispers of deep plays in all this, fixed his fame, and thereafter his services were in demand for the furthering of all sorts of possible and impossible financial transactions.

Several fine residences are illustrated and described in the September issue. The brown tints make the pictures appear to excellent advantage, The Summer Home of Ambassador von Meyer. By Barr Ferree. The Modern Bungalow. By F. D. Nichols.

The Dream That Failed to Come True

TALKING of marrying agin reminds me o’ something that ’appened to a young fellow I knew named Alf Simms. Being an orphan ’e was brought up by his uncle, George Hatchard, a widowed man of about sixty. Alf used to go to sea off and on, but more off than on, his uncle ’aving quite a tidy bit of ’ouse property, and it being understood that Alf was to have it arter he ’ad gone. By W. W. JACOBS IN STRAND MAGAZINE15 min

A Journey into the Interior of Peru

TO reach the interior of Peru, and the rich mineral-bearing zone upon the eastern slope of the Andes, the traveler must, from the Pacific littoral, invariably cross the summit of the Cordillera, for this vast natural barrier runs parallel with the coast and leaves no pass, speaking generally, at a less altitude than 14,000 or 15,000 feet above sea level. By C. REGINALD ENOCK IN GEOGRAPHICAL JOURNAL14 min

THE little French colony of St. Pierre-Miquelon as an international issue has its own features of importance, but they cannot compare with its remarkable record as a contrabandist emporium. Nominally the headquarters of the Breton fishermen, it is really the distributing point for thousands of dollars’ worth of valuable commodities illicitly introduced into the neighboring countries. By P. T. McGRATH IN THE WIDE WORLD14 min

Land Speculation in the North West

"LAND is the true basis of all wealth”—one may quickly follow up and test the exactness of this reasoning. It is exact. He finds that the line of thought pursued carries him through an instructive series of conditions, exposing the fundamental principles of commercial life. By T. J. TOBIN11 min

4647
DEVELOPMENTS IN SCIENCE AND INVENTION

The Utilization of Waste

SUCH remarkable progress has been made during recent years in the elimination of waste that it would seem that there was little left in this direction for the ingenuity of man and the creative force of science to accomplish. It has for years been the open boast of the Chicago packer that nothing of the hog escapes but the squeal. By HENRY C. NICOLS IS MOODY’S MAGAZINE10 min

The Lure of the North Pole

BEFORE attempting to give an idea of the charm, the attraction, of the North Pole and Arctic exploration, let me try to answer the question—What is the North Pole? And in doing so, I imagine that I shall give some information that will be new, even to the oldest and best-informed of my readers. By COMMANDER R. E. PEARY IN PALL MALL10 min
September 11906